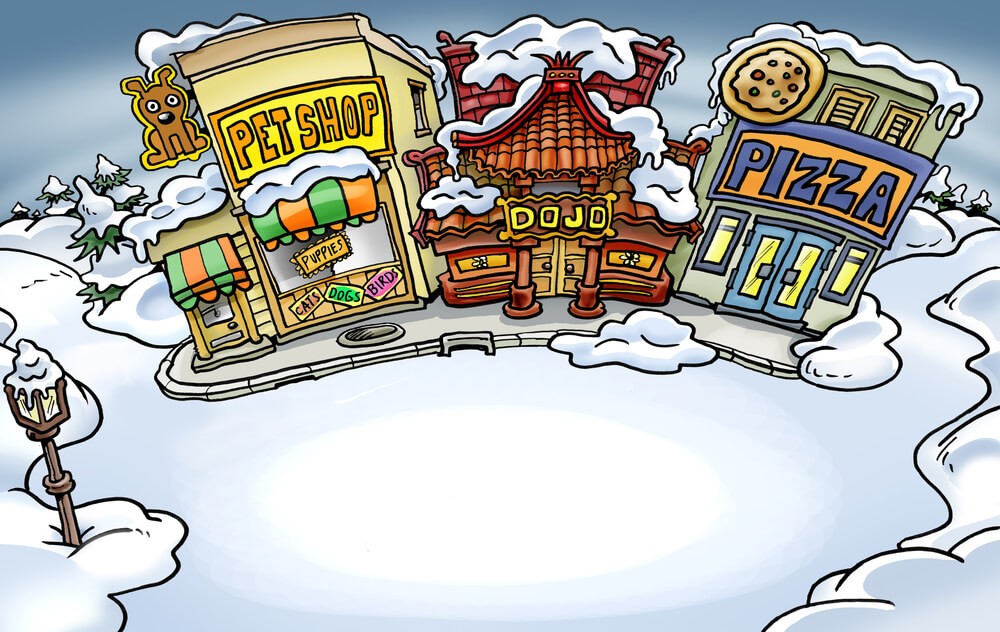 As you can see, there is the Dojo in the plaza. That was the original plan. It didn’t fit in very well with the Plaza because the pet shop is right next to it and that is where you adopt puffles. Rsnail said this, ” The original plan was to include the dojo in the Plaza, but the Pet Store and the Pizza Parlor were not ready, so the Dojo was hidden on the map with the iceberg. The mountain became the perfect home for the Dojo and later Card-jitsu. When Club Penguin launched on October 24th, 2005 the Dojo and all the clothing items were ready to be unlocked. ”  I personally think, having the dojo near the Mountains is fine. Little fact: There has been only 5 pins in the Plaza.

When CP opened, the Plaza was somewhat different than the picture above. There was no Dojo there but there was the Pizza Shop and the Pet Shop. Where the dojo was was placed, there was some trees and two tables. 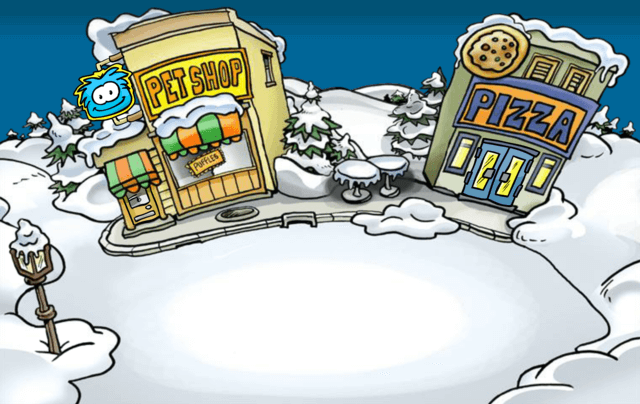 During to the Pizza Parlor Opening, there was a banner on the Pet Shop that said “Grand Opening” March 17. This was due to the fact because, the Pet Shop would open that day. 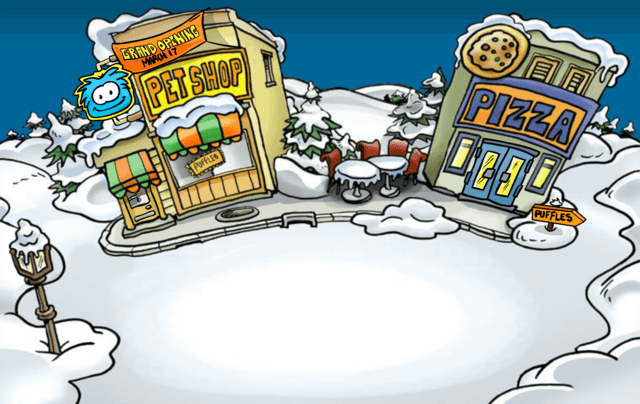 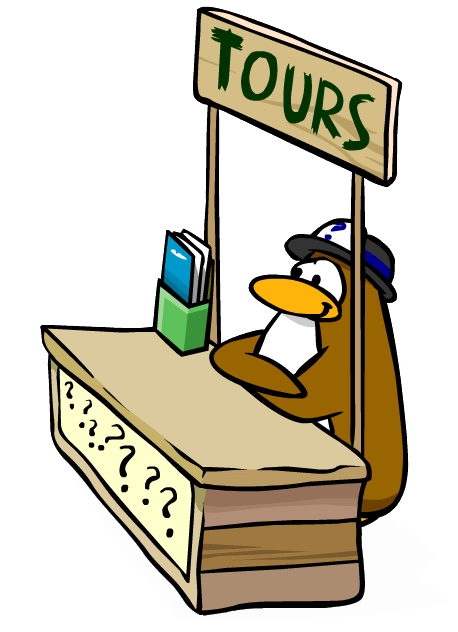 Well, there is not that much to say about the Plaza in 2007 but I guarntee you that they added just “Tours.” 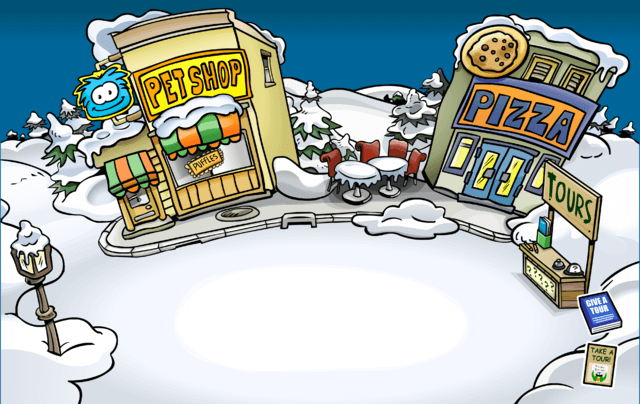 In late 2007, they replaced the two tables for construction. They wanted to build a stage. In October 2007, the stage was nearly completed. Finally, in November the stage was built. Here is how it looked, when it was built. 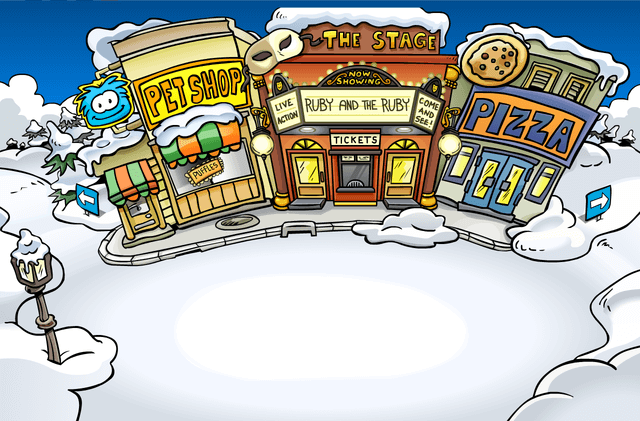 In years time, the Plaza had a completely new look. Everything was updated. 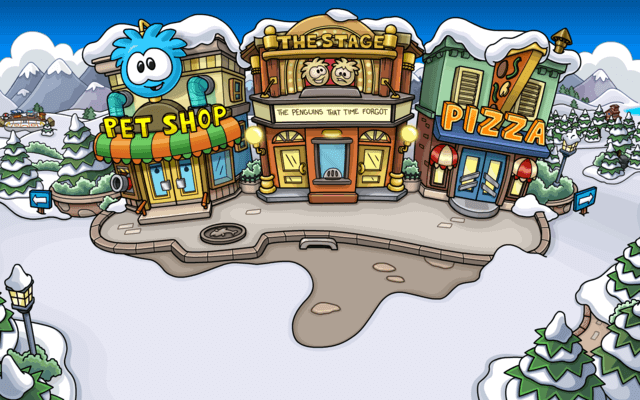 This plaza is way better! It features and oh my… its just epic!   There is not much to say but something in 2013 happened.

This was not expected. In 2013, Rainbow Puffles were realsed and members could adopt them. But how? In Plaza, they added the Puffle Hotel right between Pet Shop and Stage. 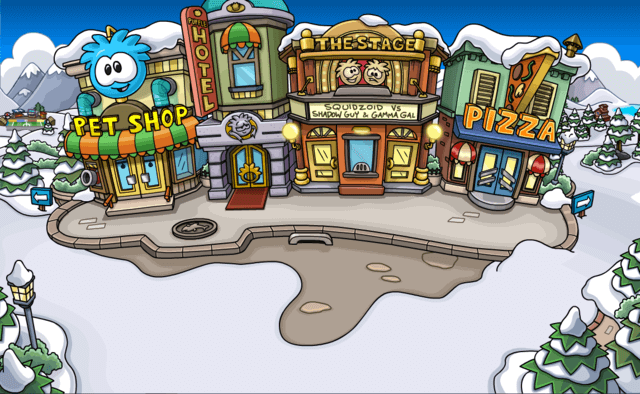 Still the same, just another room added. I cant say very much but it looks cool.

On June 5 2014, the stage was gone. I remember I was on server Blizzard and we were all saying “DONT TAKE STAGE DOWN.” I had to leave. When I came back 2 hours later, the stage was gone. Thats it! The Mall was there. Not many people were there. Well, this is the current plaza. What will happen next to the Plaza? Comment below! 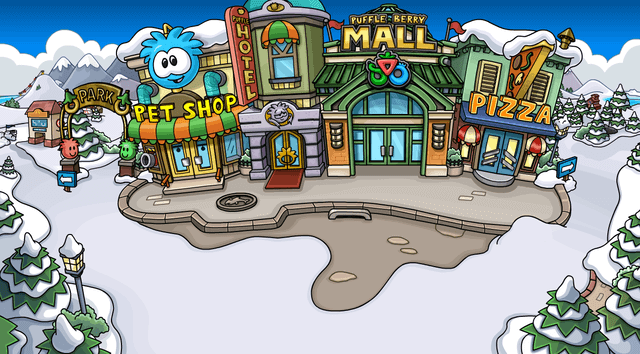 Hope you enjoyed reading this  discussion. Come back for more!