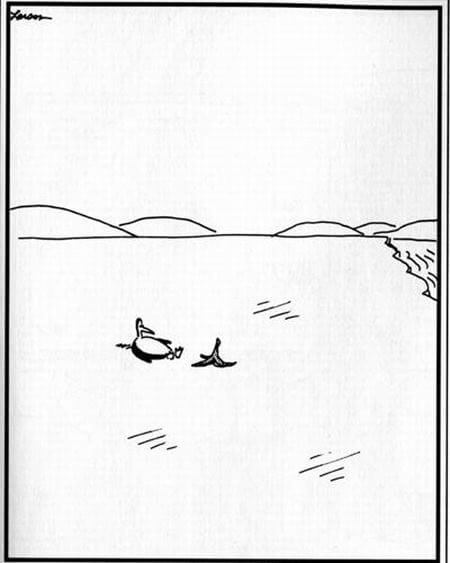 Happy Monday! As part of the second Monday of a month, I intend to post something random from Club Penguin’s past. Usually it’ll be something nostalgic, like a room from a party, but since this is the first kind of this post, I wanted to go right back.

The first of the two images is a comic, and one you might recognise. At first, it might not look too special; it is just an image of a penguin slipping over a banana peel! But this little comic has had a more significant impact than I once would have ever expected.

This little comic was what inspired the penguin element of the game, along with the fact that it was easy to animate! I say “the game” because, as you may remember from the New Horizon’s Documentary, the name “Club Penguin” hadn’t been decided yet. In fact, the entire concept was constantly evolving, from a snow blaster game to a chat to a virtual world.

So inspiration can really come from anywhere! And so, Lance Priebe, with a bit of help from some folks across the world, started development in his basement. And that brings me on to the second and final photo for this post.

That is an image from Lance’s basement, taken many years ago. The thing which I find most remarkable is simply how much technology has changed in such a short time; it’d be rare to find a computer like that now!

I hope you enjoyed this kind of post! The aim is for one to be published on the second Monday of each month, and it really could feature anything.