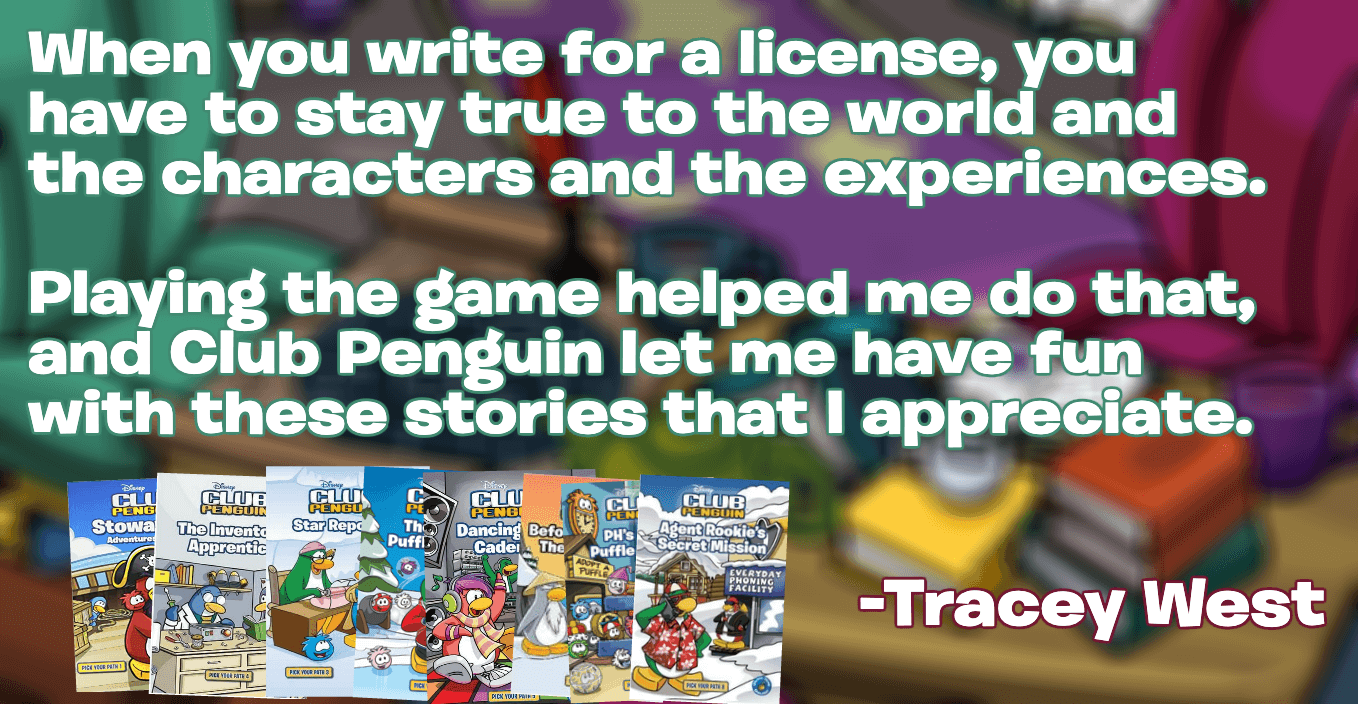 During Club Penguin’s prime, several books were published that could be purchased in stores throughout the world, varying from guides to stories. One format of this were the eight Pick Your Path books, where you could dictate the story by turning to certain page numbers to continue your path.

In this month’s interview, I’m extremely fortunate to be able to ask the author of these books, Tracey West, a series of questions about the writing of them!

It’s been over eleven years since the first Pick Your Path story was released, yet in many ways, very little is known about the process in which the books would be written and published!

The first thing I wanted to ask was the process behind their publication, from who was contacted first to the flexibility regarding the plot.

I was hired by Grosset & Dunlap, who had a licensed agreement with Club Penguin to create the books. I had written several pick-your-path style books for other properties.

My sister, Katherine Noll, and I worked on guidebooks for Club Penguin so I was very familiar with the game before I began to write the narrative books. Club Penguin would let my editor at Grosset know what they wanted the theme of the book to be–puffles, for example–and I would work out the plots from there.

If you’ve read some of the books, it’s very clear that there’s a lot of details that most people wouldn’t instinctively be familiar with! The examples that immediately come to mind are depictions of puffle personalities, such as how the black puffle would be shown to have a grumpy personality and catch flames, just like in-game.

Such details seemed to indicate familiarity with the Club Penguin universe, but I wanted to confirm if this was the case, or if there were ever difficulties posed in keeping the content “true” to the game.

Thanks for noticing those details! Yes, before I began writing the guidebooks both my sister and I became very serious players of the game. I was given a member account and if I remember correctly, I would be given coins so that I could keep up with the new items coming out and test them out.

I played a lot of CP and so did my youngest stepson, Zane. So I played the games, completed the quests, went to the parties, decorated my igloo–and all of that really helped when writing the books, because I was immersed in the world.

One of the three Club Penguin guidebooks

Despite that, there was a lot of flexibility and freedom within stories!

I have to say that I am very grateful to Club Penguin for giving me a lot of freedom with the stories. When you write for a license, you have to stay true to the world and the characters and the experiences. Playing the game helped me do that, and Club Penguin let me have fun with these stories that I appreciate.

For those who are unaware how the Pick Your Path style worked, you could read through the book where you’d face an option. Depending on which option you selected, you’d be directed to a new page number to continue your journey.

I must admit, writing in that format always seemed really challenging to me! I was curious on if there were ever difficulties in maintaining this style.

The Pick Your Path style is definitely challenging, because you have to first come up with a plot that is strong enough yet flexible enough to go in many different directions.

When I write in this style, I use poster board and post-it notes to plot out each story and see how it goes. That help me makes sure that the reader is able to explore each storyline equally.

To conclude, I asked if there were any memorable stories or events that occurred whilst writing the book.

Honestly, nothing sticks out. I have great memories of playing the game, and Aunt Arctic was my favorite character. I have a little figurine of her that I look at every day. And I miss my puffles!

My favorite book to write was the Great Puffle Switch, because I loved the idea of a player getting to be a puffle.

I found it really interesting to hear about the Club Penguin books, and I hope you did too! I’d like to give a huge thank you to Tracey for dedicating her time in answering my questions!