Lately I’ve been doing quite a lot of discussions but not so many ideas. Well, I thought about an opportunity to bring a new room to the island. This was something mentioned before in the community but I haven’t heard much talk about it. I’ve also extended that idea a bit further. Here’s the idea of a room which you, hopefully, won’t end up.

So, when you’re banned you will get a screen when you log in saying that you’re banned and your only choice is to go back to the home page. Believe me, I know since my main penguin did indeed get banned forever. However I want to change that up a bit. I present to you the “Jail”. This will be a room in which all banned players will be able to access, yet unbanned may not. This design from the Marvel Super Hero Takeover in 2012 and 2013 is a good design, in my opinion, on how the room could look like. 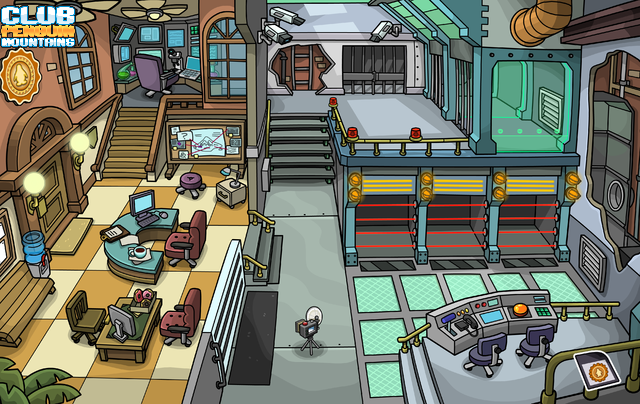 If you click the button located at the bottom right hand corner, an image will appear explaining why you were banned and how long of your ban you have left. Isn’t this just like playing Club Penguin then? If not, what’s the point of it?

Well, I think users who are banned should be given more freedom. Trust me, as a banned player it is rather frustrating to see years on that penguin fall apart. What I believe they should be able to do in this room is play mini-games. I also see no harm in letting them waddle around that room, letting them change clothes that they already own (unless they cheated) and accessing their stampbooks.

The down side? They cannot communicate at all with other penguins. By this I mean that no one else will be allowed in that room, just them. They cannot play multi-player games or access their friend list. Nor can they leave the room, including visiting their igloos. I also feel that they should not be allowed to buy things from catalogs and be able to visit parties. It will just be the same room to them until they are unbanned.

That’s a lot of downsides, yes. However it is still more than users, like me, are currently getting. Right now, we can do literally nothing. They can do no harm to other players nor can they break the rules since all they can really do is play mini-games. This could result in Club Penguin getting a bit more money as some players might decide to buy a membership to access games and levels that require membership however I doubt that many will.

What do you think of this idea? I doubt Club Penguin will implement it anytime soon as they don’t have time to do anything since they claim they’re busy working on Project Super Secret. However, if you read the discussion about CPPSs (if you haven’t you can click here to do so), you would have noticed how the person I interviewed stated that it doesn’t take long to make a room. That’s with letting users talk and all, yet now they can’t even do that so surely it would be easier to make!