I am furious with Club Penguin right now. Two days ago my penguin got banned for what I believe is an invalid reason. Today I am going to explain the story, why I think it is wrong and how you can prevent this from happening to your account which is why I’ve marked this as a discussion.

So let’s hop back to October 2015. I bought a twelve month membership of eBay for, at the time, £7.50 since it seemed like a bargain. Of course, eBay has protection policies so I was pretty sure that this wouldn’t be fake, and even if it was I could claim back my money. However, I did not count for this scenario happening. This is what I bought of eBay. 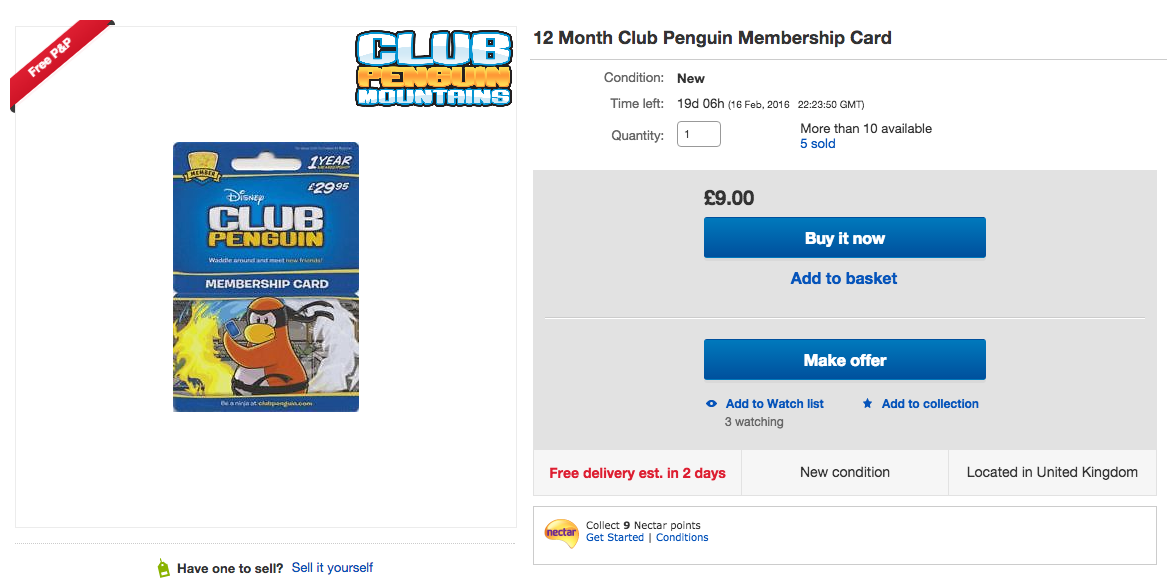 Keep in mind that I bought a one year membership for £7.50 even though it is slightly more now. If you bought a membership of the official Club Penguin website, one month would cost £4.95 so this is basically a bargain. If you are someone who has this in your “Watch list” or intend to buy it, do not and I will explain why.

I redeemed it at the end of October and everything was going well. My parent’s account even said that the card was charged and I paid 39.95 euros for the card, when I actually did it. I thought that this meant it was real, and that was fine for about a period of three months. No issues, no problems, just a usual membership. That changed on Wednesday night.

Suddenly I got a notification that I had an email on my tablet. I opened it and I was shocked at what it read. 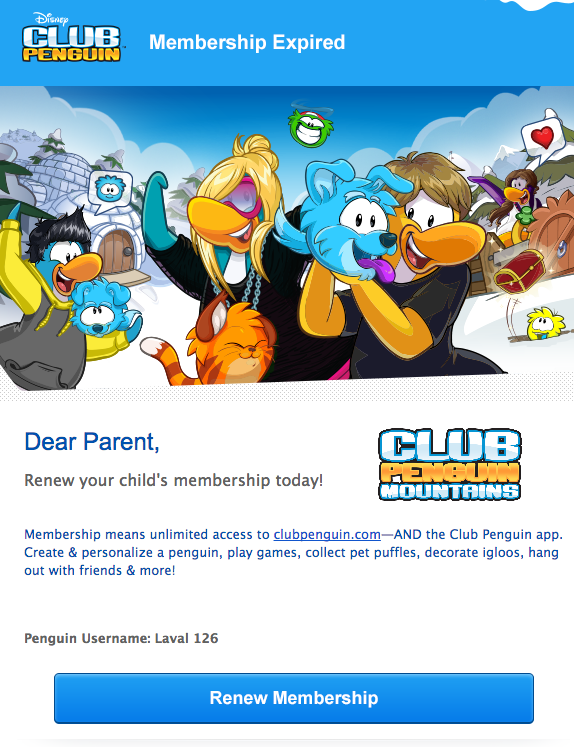 My first reaction to this was that it was a bug. Club Penguin had recently had a few issues with their database and I assumed that this would be fixed by morning. Just to be sure I logged onto my parent’s account and it did indeed say that I was not a member. I still thought it was a bug, until I saw the statement that said “Your penguin has been ban free for 0 days”. I checked my ban history and this is what appeared.

This was certainly no bug. I have sent an email to Club Penguin and I await their response at the time of writing (this post is being written a day before being published). This is what makes me furious. I do not believe that this ban should be in place.

Reason one is that I did pay money. Agreed, I didn’t pay the full amount since I got it of some dodgy seller on eBay, but I did pay money nevertheless. I am also curious on why they placed the ban now. I mean, I activated the membership last year and no-one said anything. Then one day, boom, ban. The second thing is that they don’t say ordering memberships of eBay is not allowed. I am the victim here, I should not be in trouble, the seller should be. I even fell for it as I thought it was real, especially since it showed up as a paid card in my parent’s account. Hopefully Club Penguin lift the ban when I explain this to them.

So how do you prevent this then? Well, this doesn’t mean you cannot buy memberships online. The best and definitely the most secure way is to buy them in-store or at clubpenguin.com. You should not really enter into Disney giveaways, even official ones, but that is a discussion I did on Club Penguin Reveals. My advice would be to stay away from those Disney giveaways.

Also, never accept a code that begins in “13”. It most likely will not work, but if it does you are in trouble. Say if you want to order something online though. Well, I do believe that this is okay but make sure you are buying the card, even if it is off eBay. By this I mean that you aren’t just sent a code in your email, you are sent a physical membership to your home address. You could always not do these things, but it could end up badly like it has done for me.

Well, what about the seller? I believe that he should be bought to justice. I explained by situation to the owner of PengFeed (you can view his site by clicking here) and he made a post about it on his website. In his post, he included an image on how he thinks the eBay seller makes money.

Even if this theory is false, I still believe that the seller should get into trouble for scamming as this is not something that works. His theory also makes sense. If you look at the image of the item, you can notice that he has over ten available and he keeps increasing the amount of money for them. I believe that Club Penguin should take action against this “Evil eBay Merchant” as if this method is true, they are losing money and accusing the wrong person.

Some of you may realise that creating graphics does require me having a penguin. I have created another account and you don’t need to be a member to make graphics so I will continue. I will not close down the site like when my main penguin got banned. Remember to ensure you always get your membership in a way that will ensure you do not get banned and definitely do not buy this product.

Waddle on (if you are unbanned since I can’t exactly waddle anymore),