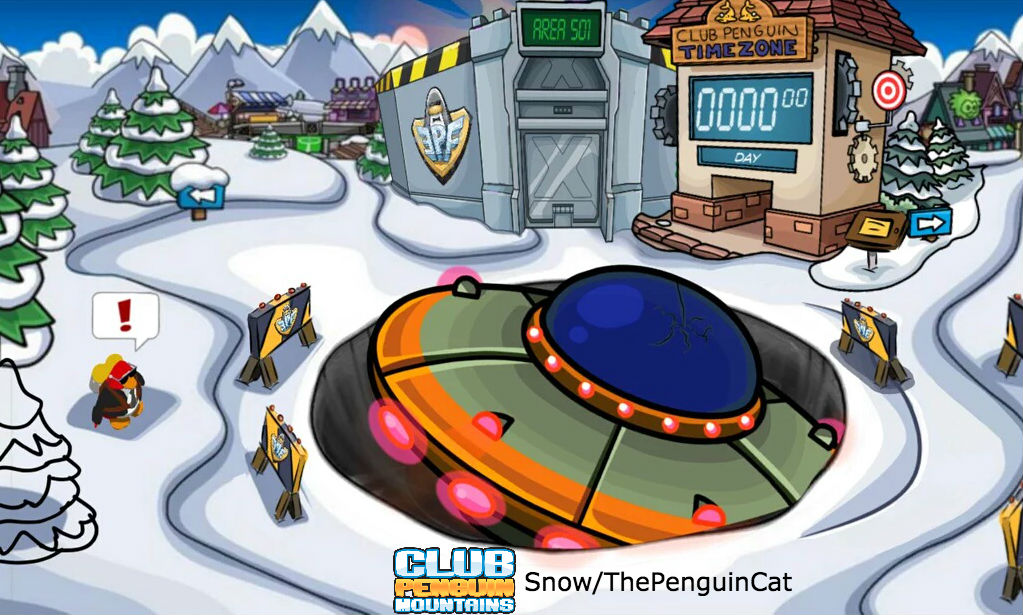 Recently, I thought of a good conclusion for the end of Operation Doom/Tri-umph. If you read my other idea on being able to toggle alien abductions (you can click here to read it if you have not done so already), then you would be aware of the fact that quite a lot of players don’t like the concept of aliens on Club Penguin, mainly because they’re just so annoying.

Today, I have an idea to…well, not solve, but retaliate against those aliens. In that post, I mentioned that they should be blast out the sky. Although they have left the island, I propose that they crash back on the island. You may be thinking why we would want our friends to crash (other than they’re annoying). I think it would be a great plot twist and we might need to do another mission or two. But I must stress that their spaceship will be broken so they will not be abducting any more people. Take a look at this newspaper article from The Club Penguin Times.

Since I’m showing you this, you’re probably thinking my idea won’t happen because in the third paragraph, it is claimed that they have a reliable power source. But let’s be honest, when has Gary ever done something reliable? He created Protobot, a villain on the island. I reckon that Club Penguin could easily let them return. Also, the last paragraph mentions to keep an eye on the sky for more encounters. This suggests that they could make a return.

The main thing I want to show you today as an image on how the UFO could look once it crashes into the island. I found this image in Snow’s list of photos, and I found it a really good design. Check it out!

I believe that Club Penguin could extend the mission around this, but it’d only be worth it if the mission was interesting and fun. Maybe Herbert manages to bring down the spaceship. The possibilities for the cause of this could be endless.

Then again, we need to consider timing. I don’t think this will be happening any time soon since the operation is expected to end on March the 2nd. It’s also confirmed that a Puffle Party has been planned, so I don’t think a mission during a traditional party would be ideal. If it’s any later, surely the alien puffles would have arrived at their destination by then, wherever that is.

One quick idea I considered is that the puffles came from Tatooine, the Star Wars planet. It’s one of the few planets which we know exist in the Club Penguin universe since we visited it in 2013 during the Star Wars Takeover. Perhaps we could be having a Star Wars takeover soon especially since a new film released earlier. All I can say is that I doubt we’ve seen the last of these puffles.