In my recent post on the plot for Earth Day (which you can read by clicking here), I mentioned the idea of a river being built through the Puffle Wilds to flood out the planned fire. Today I’m going to talk about who’s going to help build this river, as well as a story I made up on how this character came to be. This is the start of the new series suggested by Tomisino1 in the Monthly Code Contest.

The idea of this character is that he will be a builder, but he also loves protecting nature and puffles. He can be considered one of the Puffle Handler’s (PH) best friend. An artist called ThePenguinCat/Snow drew a picture on how I think this mascot should look so a massive thank you to him! Sorry that the quality isn’t good. My usual photo editor is really playing up so I needed to use another one which has terrible quality.

So let me explain the history of this mascot. I haven’t quite come up with a name for him, though there is already a builder called “Rory” who we haven’t seen on the island for ages. Perhaps this could be a new design of him? Anyway, if you were at the Puffle Party during 2015, you would be aware that Sasquatch was found in his home in the wilds. His house isn’t much of a house, but it looks like this. 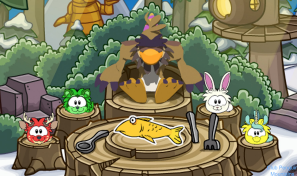 What if this character actually helped Sasquatch and the wild puffles by designing and building this home for him, in secret? This could be because he was worried that penguins wouldn’t like him for creating a home for what some people thought, a monster. He did this because he loves to help puffles and protect the wilds. Now he will happily aid us in building a river to stop the wilds being destroyed.

During the Earth Day event, I think that this character should be meet-able in game. I doubt that a stamp will be given when you meet him because Club Penguin hasn’t added any new stamps for mascot. Technically this wouldn’t really be a mascot because it’s likely that he’ll only appear for this event. Despite this, I’d like to see a background for player who meet him to collect as well as his signature in the end of year book.

As for helping build a river, he will simply supply us with the tools and give us guidance. It’s up to us to complete the actual task. I haven’t really thought of detail for the task other than helping to build a river, get water ninjas together and to buy fire hoses to get out the fire. Of course, I did also mention we’ll need to re-plant some trees in my previous post.

I think that this character will simply add to the event and make it more fun. It’s always cool to have a new character here and there! Hopefully Club Penguin makes this happen, though I doubt they will. I’m really hoping that they’ll at least have an Earth Day event though.