The Snow Forts is one of the most iconic rooms of the island that was opened in September 2005. The main point of the snow forts is to have snowball fights. However, let’s be honest. How many times do you see a good old snowball fight? Pretty much never. I hope to change that. 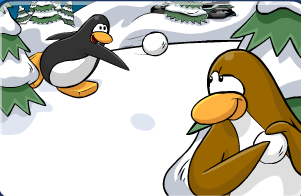 My idea is to create a mini-game for the Snow Forts rather than penguins just using the snowball feature. Some of you may remember the Game Day Nintendo Wii game. This actually had a game that was exactly like a snowball fight and it would be awesome if they could reintroduce it onto the web. I had great fun playing this game and it was one of my favourites!

You may notice that the penguins are in 3D (they were like this in all events throughout the game) which gives #ProjectSuperSecret the perfect opportunity to introduce this game. I’m certain that millions of people would play it if it was as fun as the original Wii game.

Besides, it’ll add more fun to the Snow Forts and would add more competitively between penguins. Card-Jitsu has always been so popular as it’s one of the few games which players can compete against other players and this would be another game where penguins could do the same.