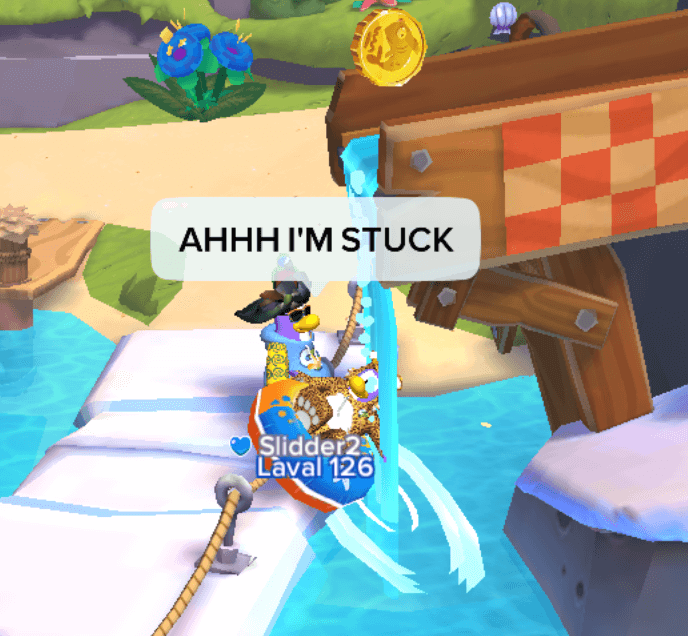 It was a brand new day on Club Penguin Island and that meant another adventure awaited! I jumped to my good friend Slidder2. He wanted to show me a few of the glitches which he had discovered across the island and I enthusiastically agreed to help check them out!

The first place we went is to the Water Slide where it had been rumoured that your penguin could either fly, disappear, get stuck or do all three. Over the course of about 15 minutes, we managed to do all three.

It was so cool seeing our penguins fly. All we had to do was go towards the water slide, get on our tube and have the other person jump on us!

However, the most scary thing was a penguin who appeared and chanted this website’s name before waddling on. No penguin knew minion cul’s intentions and why they said this however it confused us! It’s always awesome to meet a viewer though!

With this glitch uncovered, we took a small break and we went to the Foodtrekker to indulge in Stinky Cheese! I met up with SKELETON KEY, another viewer of this blog! However, our lunch break was over and it was time to go hunting for more glitches. We didn’t just want to find the glitches, we wanted to find out why they were there!

Slidder2 believed that there were multiple hidden in the Lighthouse. It was rumoured that it was possible to go deep into the mountains, teleport and also fly! The first thing that happened when I tried to go up was that my head hit the balcony. Ouch!

Eventually I joined Slidder2 on the Lighthouse’s balcony. It took multiple tries to be able to make this glitch work however eventually Slidder2 did it! I found it impossible so I just friend-jumped to them. We were on the mountains and on top of the shop!

It was awesome! Usually it’s impossible to get to these places however with an extraordinary amount of help from Slidder2, I was up there! We had to use the trackpad and jump at the same time. It sounds easy but it wasn’t! There were lots of other screenshots I had somewhere however I seem to have lost them. I think those pesky crabs stole them! 🙁

The path was very narrow and unfortunately, we slipped! It looked as if we were going to crash into the shop but magically we got teleported back to the centre of Beacon Boardwalk and near the entrance to Coconut Cove.

We were determined to find the source of these glitches! The first place we investigated was the Throne Room, the home of the magic sculptor. Although we had fun playing with them, it didn’t leave any clues as to why these magical glitches existed and how they could be fixed.

Unfortunately, it seemed as if hope was lost. Slidder2 had to go and so I waved goodbye.

A few hours later, I logged back on to see my friends list tell me that Meggasaurus (also known as Megg) was online at Beacon Boardwalk! A few penguins were there and were dancing at the Welcome Circle. Meggasaurus kindly shared some Hot Coca with us all and then we all looked for glitches together. A few players found one which allowed penguins to fly!

It was when we believed that we’ll never find the solution to these glitches that magnificent Megg told us the truth. They were the responsibility of the Club Penguin team and it was our job to report them! We can email any to “support@clubpenguinisland.com” and they will hopefully be fixed! It’s important to note the difference between glitches and bugs for glitches rarely are something which makes your experience on a game worse!

This post was not acted. The players mentioned are real people and these things actually happened although they were not all in the order shown in this post. I simply just took screenshots of my day on Club Penguin and made a fun story out of it to show some of the glitches on our game. There were no scripts and nothing was planned in advance! I’d like to give a thank you to everyone who took part, especially Slidder2 and Megg, for helping with this post! I’d also like to thank everyone for reading this now!