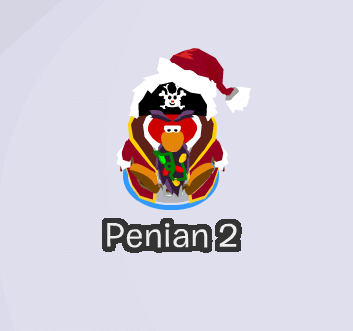 It’s time for another Mountains Monday post, and as it’s the second Monday of the month, this is going to be something completely random from Club Penguin’s history! It’s actually a Christmas tale from 2013 which some people may recall.

As part of the Holiday Party in 2013, Rockhopper was visiting with a new design based on Santa! The head item was called Rockhopper’s Santa Hat, but for a short period of time, it was available for everyone. However, it was only obtainable through means of cheating with items adders, so both the main item adders at the time (sites called Penguin Lodge and CPCheats) were very careful in warning people not to wear the item in public spaces.

Penian was one of the two people, along with someone called Mike, who provided this cheating tool

The item effectively allowed people to dress like Rockhopper, which led to some massive confusion for a few days across the island. Even more bizarrely, when you clicked someone’s playercard, they would appear as if they were Rockhopper. This is due to how mascot items worked.

This bug was introduced since the item wasn’t “patched”, which would’ve blocked people from obtaining it through cheating. Furthermore, you’ll see below that the item is now registered as is_bait (the 1 means true). Initially, it wasn’t, so anyone could wear it without Club Penguin’s anti-cheat system taking effect!

Club Penguin fixed the Rockhopper Santa’s Hat a few days later. On about December 28th, both cheating sites were issuing stark warnings not to wear the item in order to prevent people from being banned for 72 hours.

However, that’s the pretty fun tale of how there were so many Rockhoppers wandering around in December 2013! Thank you for reading, waddle on!