We have a step-by-step guide for episode 7 of chapter 2 of Aunt Arctic’s Adventures: Double Click! Along with that, we have a video courtesy of MysteriousAeon. Let’s get straight into it!

Listen to Aunt Arctic who will ask you to learn crab from Rookie. To do this, head over to the island where buoy 2 is in Coconut Cove.

Listen to Rookie and watch the slides. Then he will tell you to jump to say “hi”. Do so!

When Rookie asks you if you’re a penguin, open your emoji bar and tap your new emoji, the one with a crab and a tick.

Watch and listen to the rest of Rookie’s presentation. He will ask you to ask for a fishdog. Do so by using the fishdog emoji then the crab yelliw exclamation mark emoji.

Now head over to the Foodtrekker in Beacon Boardwalk to grab a fishdog. When you’re there, Klutzy will be there! You need to talk to him so say “hello” by jumping.

Klutzy will ask if you’re a friend. Say yes by using the crab green tick emoji. Once he asks if you’re royalty, use the crab red cross emoji.

Take out or buy a pizza from your inventory. Klutzy will take it but then Herbert will call Klutzy. He will run away but leave a checklist which you will read!

Claim your reward! I hope that this guide helped! 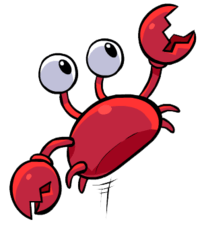