Some of you may have noticed a button where the “discussions” and “ideas” images are last night. When you clicked it, it said that nothing is available. Well, here’s why. The main two things I’ve done on this website since I re-opened is discussions and ideas. Now it’s time to spice up the flavour a bit. This is a series which YOU guys requested and here it is. Merchandise Memorial. So, what is this new series then? Basically, I’m going to feature some of my Club Penguin merchandise which I have collected over the years! I’m also going to offer you a chance to share your collection and you guys will be helping me which merchandise I showcase next! More on that later.

The reason why I’ve included the word “Memorial” in this name is because in late 2012, Club Penguin stopped the production of their real life merchandise. Why, well, I don’t want to turn this into a discussion in this post, but perhaps I will do one in the future since that question is a mystery. In these posts, most of my merchandise will not have been bought of eBay however I do sometimes buy some items off there. These merchandise are the real deal.

So today I’ll be featuring my collection of figures. I’ve collected these figures over SIX years and I still remember buying some of them at stores across the UK. That might explain why these figures that you are about to see are not in the best shape. I’ve also lost quite a few of the figures as the years went by as I do remember I definitely had a wizard penguin, Shadow Gal, DJ Cadence’s and probably more figures. You may be wondering how they got their name. This is because with these figures, you can take of their flippers, body and head and swap it with another penguin’s unless they are a mascot or Herbert. Pretty cool, right? Without further ado, here is my collection of mix ‘n match figures. 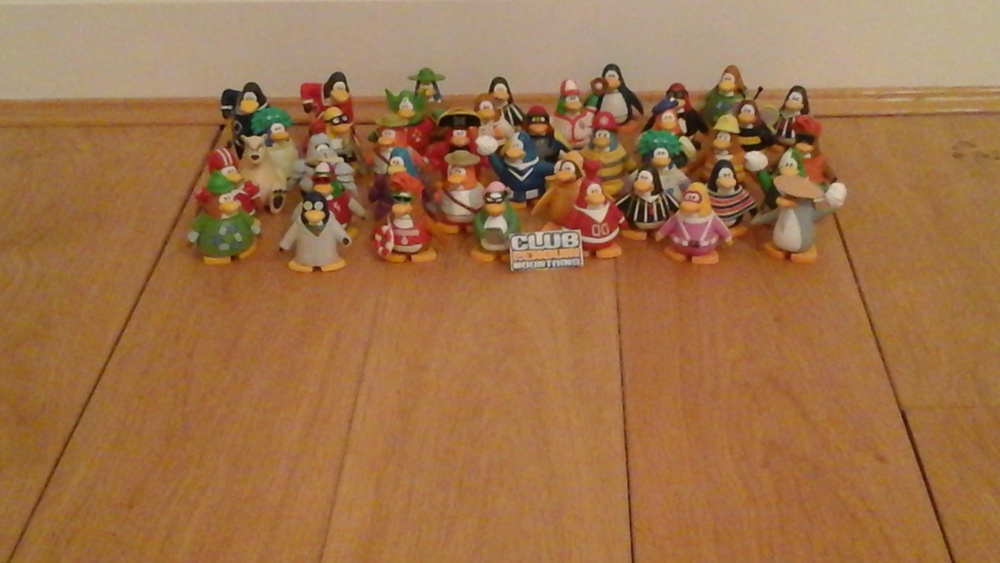 It isn’t the biggest collection, but I am still impressed I have managed to collect so many. In fact, there are eleven series which Club Penguin have made. You may be wondering how to get them now. Well, the only way to easily get them is online. Back in the day, shelves were full of these toys but now you’d be lucky to find any Club Penguin related product, other than memberships.

Don’t ask me how much it cost, because I honestly cannot remember! On Amazon, it’d cost a ridiculously large amount of money. However, on eBay it is a lot cheaper for some of the more common figures. Most figures sold on eBay are used instead of new. People believe that certain figures are rarer than others and charge them at higher prices. Quite frankly though, all of these figures are hard to find these days so if you have one, I think it’s fair to claim that you own something rare.

I have quite a bit of merchandise and I want to feature more as well as yours! If you also have a collection, you can submit it to me! Just fill out the form on the contact page, which can be accessed by clicking here. If you ever see some merchandise in a store, definitely pick it up!

To help me decide what to feature next, I’ve created this poll with a list of merchandise I’m willing to feature. Please help me out by voting! I will probably feature all of them in the long run, but the most popular I will do first. Be aware that I cannot take out all my Card Jitsu cards so I’ll probably just showcase my binder, tins and some cards. As for the model making kit, I only got it yesterday so I need to build it first when I get some spare time. Vote now!

Don’t worry, there will be more discussions and ideas coming and when I get time, I’ll see if I can do a review for the Prehistoric Party. What do you think of this new series? Make sure you leave your feedback down in the comment section of this post!