Currently, two board games exist on Club Penguin and they are Find Four and Manacla. What I am proposing is that chess becomes a playable board game on the island of Club Penguin. Well, why chess may you ask? Chess is a logical board game that requires lots of thinking. If you don’t know how to play chess, well, I’m sure many people don’t know how to play Manacla, but there are always instructions for each game Club Penguin adds to the island! This could help educate younger players and I’m sure older players, like myself, would find it very entertaining. Club Penguin promotes itself to parents as a game with many ways to learn. This would help back up that statement. As for players, perhaps they could earn around 50 coins for a win, 10 coins for a loss and 30 coins for a draw since chess is a very long (and sometimes tough, depending on your opponent) game to play.

We hope to hear back from you soon! Please be sure that you are including any other ice-cool ideas or suggestions you may have. We are always looking for new ways to make our island a more fun place for all of our penguin pals.

Can we just take a moment to honour how Club Penguin asked for further details on your idea back in 2013, instead of now. When I submitted my idea for a 2016 annual (which you can read by clicking here), they simply said that they’d pass it on to the rest of the team. Back in the day, they’d seem like they were interested and would ask for details on your idea.

Anyway, at the time, I proposed the idea of replacing a few of the manacla boards and replacing them with chess boards. This is a rough idea of how one chess board could perhaps look like in the Book Room. I would expect Club Penguin to add more than one though and, of course, make it a lot more professional than my design! 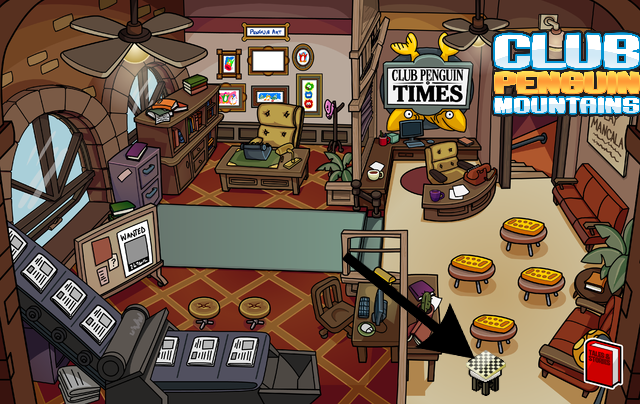 I also suggested a new room, designed just for board games! Looking back at the idea, I think I could have been more detailed in explaining, but a “games room” isn’t too bad. I do think that if this room was added, Club Penguin should add a few more board games. (How about the idea of Scrabble in the next post!?) Furthermore, you could be able to buy a board and play with your friends in your igloo! So far, only chess figures have been released as furniture items. This was their response to my idea on where it could be placed.

Although I love Mancala, I also love chess!  I think making room for chess boards is a great idea!  I’m going to share your idea with the ‘penguins in charge’, and we will keep our flippers crossed to see if this change takes place in the future!  At this time though, I can’t confirm if chess will enter Club Penguin or not.

You have stirred my curiosity with mention of a new room.  What kind of room do you think Club Penguin is missing?  I’m very interested to hear your ideas on this!

Looking forward to your response,

After I mentioned the idea of the games room, they said that they’d pass it on and they thanked me for sharing my idea. Personally, I would really like it if Club Penguin did decide to add chess to the island, but it’s been almost been three years since I sent that email. Would you like chess to come to the island? Comment down below!