The first code contest ended yesterday and today it’s time to announce the winners! Firstly I’d like to give a massive thank you to everyone who entered. These people are the ones who entered.

It was really interesting to hear the different opinions of this website from other people! Before I announce the winner, let me just discuss some of the responses. Let’s begin with the thoughts on why you like this website. I got a lot of responses which I expected. The majority of people said that the free graphics were a very good. They also liked the in-depth discussions you’re able to read on this website as well as the creative ideas.

However, the main thing I was after is how you think this website could improve. Almost everyone said change the theme, but let me explain the problems in that.  Firstly, this theme isn’t too old. I updated it in 2013, but it’s only been around for two months publicly now. This won’t be the kind of website that updates it’s theme to match the party every month as I don’t really have the time. My second problem is that I’ve designed this website in assumption that I would never change the theme which is always a bad idea. Take the colours for example. You can’t read light green if you change the theme, but because the background is black on this theme, you can. Also, the widgets resize in this theme. One person, however, believed that the site is fine the way it is now.

Another thing I want to say is that this site is made from wordpress.com. One contestant suggested that I import a theme, but with wordpress.com, you may only use the themes which they provide you with. One other good idea which I obtained from this contest is an idea for a new series suggested by Tomisino1. The series will talk about a mascot’s history. If you’d like to see this, make sure you comment down below telling me. I also want to know if I should make up one, or if I should post the official one after doing some research on the CP Wiki.

As for choosing a winner, I am stuck between three people’s answers. Mr Cookiescp gave the most detailed answer as to why he likes this site, but he likes the site the way it is now. I was looking for ways to improve this site. Pingping4069 suggested a .com domain (which we already have now!) and contests, but I don’t know what kind of contests you’d like to see. Does this count as a contest? Tomisino1 gave a very interesting idea for this mascot biography series which sounds quite interesting.

Even though I didn’t want to go down this route, I’m afraid that I have to since these answers are too difficult to decide from. I’ve decided to use a random name picker. In this case, I decided to use a website called Wheel Decide (http://wheeldecide.com). I did the spin once and the first name the wheel landed on would be the winner of the first contest. The winner, of the first monthly code giveaway is… 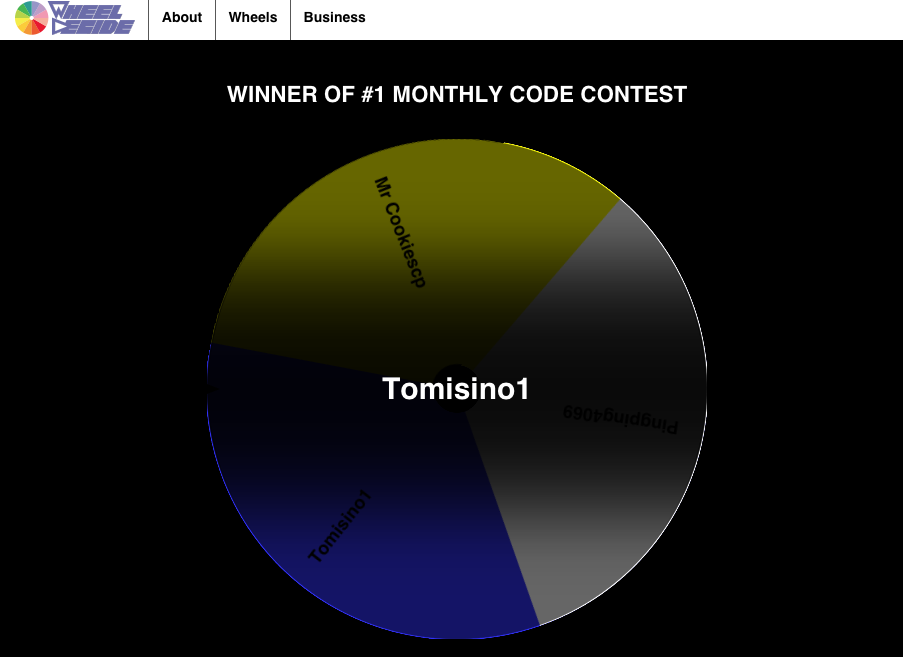 Congratulations Tomisino1! I’m sorry for any disappointment caused but don’t forget that there will be another giveaway next month, and the month after as well as the month after that and so on! I’m considering doing an Easter Egg Hunt next month, but for now there are currently no contests going on. I am probably going to start the series which Tomisino1 has suggested, but make sure to comment below whether you want it to be real or fake. Fake would mean my personal ideas, but if it’s real, you could just read about it on the CP Wiki.

Tomisino1, you should receive an email either today (22nd February 2016) or tomorrow with your Card Jitsu code in it. I’d like to give a massive thank you to everyone who entered. I really enjoyed hearing feedback from you all.