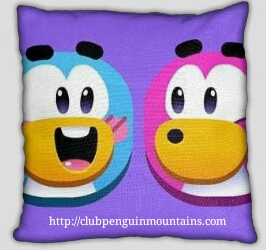 Just a few days ago, Club Penguin made a #ProjectSuperSecret sneak peek post for World Emoji Day where they featured some pretty epic emoji. This has gone viral throughout the Club Penguin community. A person I know, called Flippy, has been flooded with requests as he has managed to create some custom emoji, which is an awesome talent! In case you missed it, here’s what Club Penguin posted on their blog.

For example, emoji pillows and cushions have been a popular craze throughout the world. I created this, though I’m sure Club Penguin could do a lot better by creating a cushion/pillow that has no background and is the shape of a penguin emoji. Here’s what I came up with: I think that one of the big advantages of Club Penguin emoji merchandise is that it could attract both players and non-players. I mean, who wouldn’t want a pillow of a really cute penguin? And what player wouldn’t want to own more Club Penguin merchandise? Dozens of different types of pillows could be produced.

That’s only the first of my ideas. Imagine phone/tablet cases, mugs, t-shirts, anything you can imagine. Club Penguin has partnered with Zazzle however the prices for Club Penguin merchandise on Zazzle is outrageous. I imagine these products in stores, not just Disney and toy stores, but in big brands throughout the world.

In my eyes, these emoji have huge potential and it’d be a shame for Club Penguin to forget them. A whole range of products could be developed which would satisfy both players of Club Penguin, people who don’t play Club Penguin and Disney. The interesting thing would be the price though.

What do you think of my idea? Would you buy any Club Penguin emoji merchandise if it ever got into stores! Comment below!