Club Penguin is a business and that is going bust. We’ve had two lay-offs over the past two years and if Club Penguin doesn’t make some more profit quickly, who’s to say that a third lay-off isn’t on its way? The membership system is great, but its not producing enough revenue to fund this massive world. Fortunately, Project Super Secret presents a new opportunity to change, well, pretty much everything about our game. That includes money, which gave me an idea.

Mobile games commonly use a system called “value packs”. You may have seen these in one of the games which you play, such as Clash Royale or Clash of Clans. The fact is, it’s effective and Club Penguin is going mobile-only when the new game comes out. So what’s stopping Club Penguin from adding special offers instead of increasing membership prices? 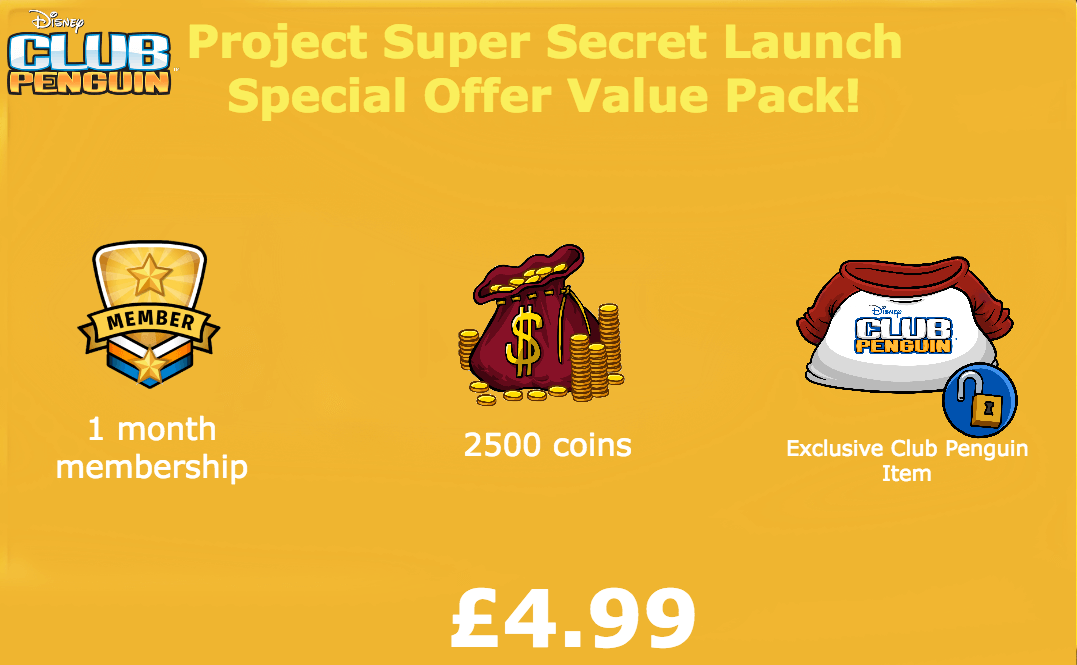 Let me explain how this works. A Club Penguin one month membership is about £4.99 in the UK. For that five pounds, let’s say that Club Penguin offer 2500 coins and an exclusive Club Penguin item. Virtual coins literally are worth no money in real-life, so including them into this pack is not a financial loss for the game. 2500 is a number which would be enough to make people want to buy it but not make those who can’t buy it angry and think that Disney just wants money.

The exclusive item literally took me five seconds to make. I just took an item which already exists and changed the colour from blue to red. It’s that simple, but the word “exclusive” will make people want to get it. Once again, it’s not worth any money. It’s just a valueless virtual item which the team doesn’t need to manufacture. It’s basically like buying a membership and getting these two virtual items for free.

So what’s the financial advantage?

It’s surprisingly large if this is executed correctly. For example, many people will want this and persuade their parents to buy it and that will probably include those who have never had a membership in the past. It’s £5, so it’s not ridiculously expensive. The important thing is that this does not affect membership sales.

Think of it as a trial.

“Look, you’ve never had a membership, so we’re going to let you become a member for a month for a pack which offers more value. Enjoyed being a member? Then purchase a membership.”

However, Club Penguin cannot keep including memberships in these packs, which brings me nicely onto my next point.

What other paid items will there be? 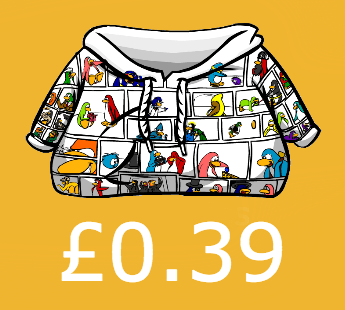 I think that Club Penguin could easily sell items at cheap prices, along with their special offer packs. Perhaps every week or so, a new pack can be bought. Maybe when there’s a new party, a special, more expensive item could be sold. It shouldn’t take too long to design, but think about it. If 1,000 people buy the item above (and bare in mind that there are millions of players) along with 8 other packs, that’s over £30,000 which is enough to pay a salary. You hire one person to work on the weekly items and value packs (and you don’t even need to do that. You could literally just make an artist work on it for a few hours), you could pay their salary.

So if more than 8,000 packs are bought in a year, which is easy considering there are millions of players who play, assuming this person’s salary is about £30,000, you’re already making profit. Logically, there’s bound to be one item you see which you go “Oh! I really like that and I want it!”. You see?

Where will you be able to buy paid items, including membership subscriptions?

The Fun Hut. However, this is debatable because there is one main positive reason and one main negative reason. You’re a kid, you tap on the Fun Hut, you see the item and you buy it, without your parent’s permission. The solution? Add some sort of question which adults would get but not kids. Maybe a CAPTCHA would be ideal.

However the reason why I insist this must be added to the Fun Hut is because it’s probably going to be one of the first things you see when you log on. If you see something you like, you are guaranteed to ask your parents. Parents aren’t just going to check the Fun Hut everyday to see if there’s a new item. But kids will. That’s why it needs to be in a room which is going to be visited a lot.

Is this a replacement to the membership system which we have known since Club Penguin began?

No, it is not. This is an addition to the membership system to help make more money. It’s completely optional to buy and you still can do everything else with a membership.

On a separate note, I’d just like to apologise for the lack of posts for the past week or so. I’ve got two BIG posts coming out this month and then I’m also working hard on the November Club Penguin Mountains update.