Pup1one has been kind enough to share some looks of the #ProjectSuperSecret mascots, which you have probably seen. In today’s post, I’m going to be giving my opinions on the look of the ones which were leaked (Rockhopper and Aunt Arctic). In case you’ve not seen the mascots as of yet, here they are!

WHAT ARE THOSE? Is that Sasquatch with a pirate hat on? Here’s the problem with these penguins. The majority of players want the old Club Penguin style to return, however this is becoming newer and newer. Let’s start with Aunt Arctic, because at least she looks fairly decent.

Aunt Arctic has a much more ugly look, however I can imagine her in Project Super Secret looking amazing as a sprite (a player in-game), even though she doesn’t look that cool on the sticker.

One thing to note is that we saw this version of Aunt Arctic in the 2015 Club Penguin Mash-Up. Now we know that it was actually a Project Super Secret sneak peek and we shouldn’t really expect to see it before then.

I just can’t imagine Rockhopper looking like that, especially when comparing him to his second player card. He literally looks like Sasquatch. But what I want to do is to put things into perspective. This is the Rockhopper Plush toy that was sold in stores a few years ago. 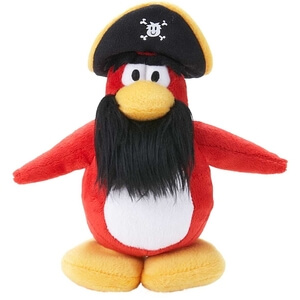 Very cute, very fluffy, great to hold. Now imagine that monster that we just saw instead of that. No-one would want to buy that because it looks so ugly, yet alone choose to hold it. If Club Penguin was to launch a new merchandise line (which many of us hope they do) the products actually need to look nice. For that to happen, the mascot needs to look nice. IS THAT MONSTER NICE? Point proven.

One thing which I am curious about is when Club Penguin is going to officially show us these mascots. I’m writing this on the 26th, and Club Penguin promised us Project Super Secret “update” today, so it might be published on the What’s New Blog by the time you’re reading this. However, this sneak peek was originally just posted on a fan-blog. Although that blog does have a large audience, the majority of players probably haven’t seen the new mascot yet.

I just really hope that these designs are not fixed and that they could change. If Rockhopper looks like that, imagine how the other mascots might look. But if a large amount of players dislike when Project Super Secret launches, perhaps the design will get changed. Do you like these new mascots?