In June, a Club Penguin artist suggested by the name of Craig Voight suggested that Project Super Secret will be called “Club Penguin Remix”. Megg has also confirmed in episode 2 of Island Insider that there will be a new name, and it will contain “Club Penguin” in it. It is most likely that “clubpenguin.com” won’t be used, but instead the new game’s name will be used for a domain. The question is, can a player buy clubpenguinremix.com?

Why would you want to own this domain? Great question! Well, if this game is a huge success, many people will Google it. “clubpenguinremix.com” is likely to be one of the top results, and if someone was to redirect that to another blog, that blog is likely to get many views.

To find out this answer, we need to see if the domain has already been taken. Remember, just because a website doesn’t load, it doesn’t mean that the domain is free. So, I used a website to tell me.

At the moment, the domain is currently not available, but when will it be? To find this out, along with who currently owns the domain, we need to perform a whois search. The results show that the domain expires on January 25th 2017.

Assuming that the domain is not set to automatically renew (which is unlikely as it would cost an ordinary penguin a fortune for a site which they’re not even using) then this means that on the 25th of January, the domain becomes anyone’s chance to buy. The interesting thing is the cost. Disney have two options, to either be waiting to pounce on the 25th, or to do some copyright stuff. However, how do we know that Disney don’t already own the domain? Let’s find out! 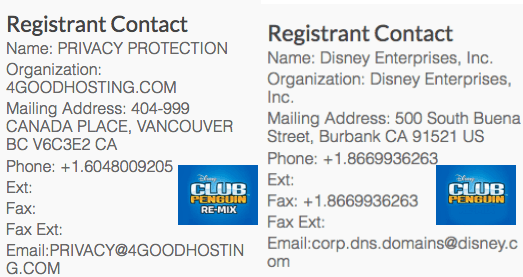 You might not understand the image above, but what it is trying to show is that Disney does not own the domain. This makes it even more likely that the domain will not automatically renew. If it goes on sale for a cheap price, I suspect that many fan-bloggers will be looking into getting this domain provided that Project Super Secret is really called Club Penguin Re-mix. What this means is that on January 25, clubpenguinremix.com is likely to go on the market again.

Project Super Secret domains are going to definitely be first come, first serve. If you want a “clubpenguin” domain for a cheap price, the time has definitely gone. I’ve already taken a few free “clubpenguinremix” domains, and I’m definitely going to pounce on more free ones when the name is officially announced. Are you?