It’s been a tradition for three years now. Every week, a special penguin gets featured on the blog after being nominated by his or her friends. Usually, that penguin feels extremely special and has earnt that award. But very recently, their have been some players who have different thoughts on how Penguin of the Week works. Today I’m going to share my thoughts about Penguin of the Week.

Well, let’s just think about this. It’s not just a background and some coins. Each year, only 52 penguins are selected. Baring in mind that there are literally millions of players on our island, achieving this award is extremely impressive. I have never won this award, but I know many friends who have and are extremely modest about it. Yes, it’s something to be proud of, but they just tell me that they’re no different to any other penguin. These people have truly deserved this award, but today I want to focus less about the winners and more about the losers.

Here’s the usual comment you’ll see on a Penguin of the Week post, sometimes with a nomination for next week.

Penny2415 has never been Penguin of the Week (though that will hopefully change soon) nor have many others who congratulate the special penguin who won. It’s something nice and it brings the community together. However, today I read a comment on the blog which was extremely embarrassing. I am aware this person blogs for this site, however I have removed him from being an author. 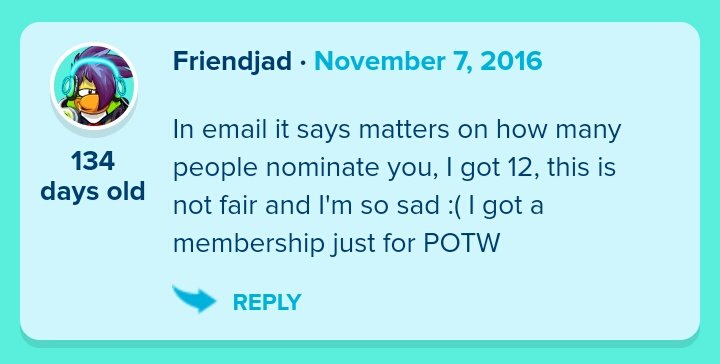 I want to break this down this comment into separate sections, because I think that there is something extremely interesting to me. Is it fair to ask people to nominate you for Penguin of the Week? It’s an interesting question, because I was one of the many people FriendJad asked to vote for him. Realistically, you’re unlikely to win the award if you don’t ask but everyone who has won it (with a few exceptions) didn’t ask others. This proves that this is possible.

But is it morally right? I don’t think so, though I see why people would. A few hours after me asking, I deleted mine because in my eyes, Penguin of the Week should be an award which you are nominated by others and when you win it, you are surprised. Does that mean that any other player should have an equal chance of winning as someone, say, older in the community? Personally, I don’t think so. Club Penguin means a lot more for older players than younger players and I think they deserve the award the most.

Membership. Do you need a membership to win Penguin of the Week? The answer is not known, but I think that the only non-member to have won was King89698, and that penguin was extremely special. Jad said he just bought a membership for this, so I presume you actually have had to have been a member for quite a while. Do bear in mind that this is all just based on history. 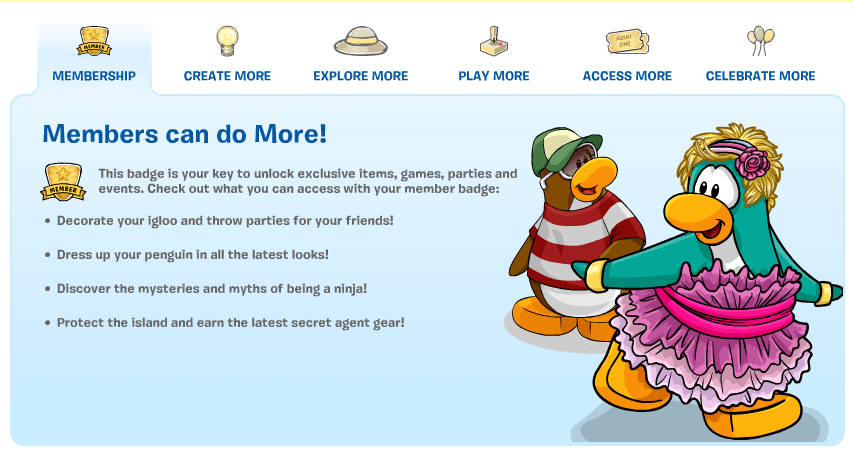 But is there something wrong with just buying a membership for Penguin of the Week? I believe so. When you buy a membership, you’re usually doing it for one of two reasons. Either you want to support the game, even though you might not enjoy it as much. Or maybe you just want extra benefits. There’s nothing wrong with that. That’s what Club Penguin wants you to get membership for, ever since they were introduced.

Enough about this talk on membership. Let’s go back to the original comment where FriendJad described himself as “sad”. This is what concerns me the most. Penguin of the Week is designed to bring the best out of our community. It’s designed so that we nominate those who have done something special or those who are special. No-one should be sad about them not winning. They should be happy about someone else winning.

Also, props to Megg for handling the situation really well.