Hello penguins, Duck here. And today I will be looking at what I’m calling ‘The CP Party Formula’. Think of it as a way that the club penguin team would make a party, certain criteria if you will. Of course this probably doesn’t really happen, but it’s a different way of looking at the eras of the game.

Back in this era, the decorations for Club Penguin parties was only drawn by Screenhog, as the team was so small at the time. I’ll use the Christmas party 2005 as an example. This party had a few objects and items that you would relate to the time of year. At the Ski Rink, there was a Christmas tree with a few presents around it as well as a snowman. The first parties on Club Penguin had a few touches here and there that didn’t take away from the room. But seeing as the Ice Rink can already be seen as festive, let’s use another room. The Town had fairy lights hanging from the buildings, a tree, a candy cane, a lamppost and my favorite feature- The Night Club lights changed to green and red. My thinking is that Screenhog kept to limited items because parties were being introduced and it wouldn’t be fair to suddenly to transform the island for a new game.

A similar idea goes for 2006, limited items that would summarize what you would imagine when you heard the party name. For this year, I’ll be looking at the Summer Party. The main difference between 2005 and 2006 decorations is that some rooms may have a different purpose to what it is with the regular-looking island. Take The Night Club, normally you would dance here. But not at the Summer Party, instead it was a swimming pool. And the less major change was a few more decorations. 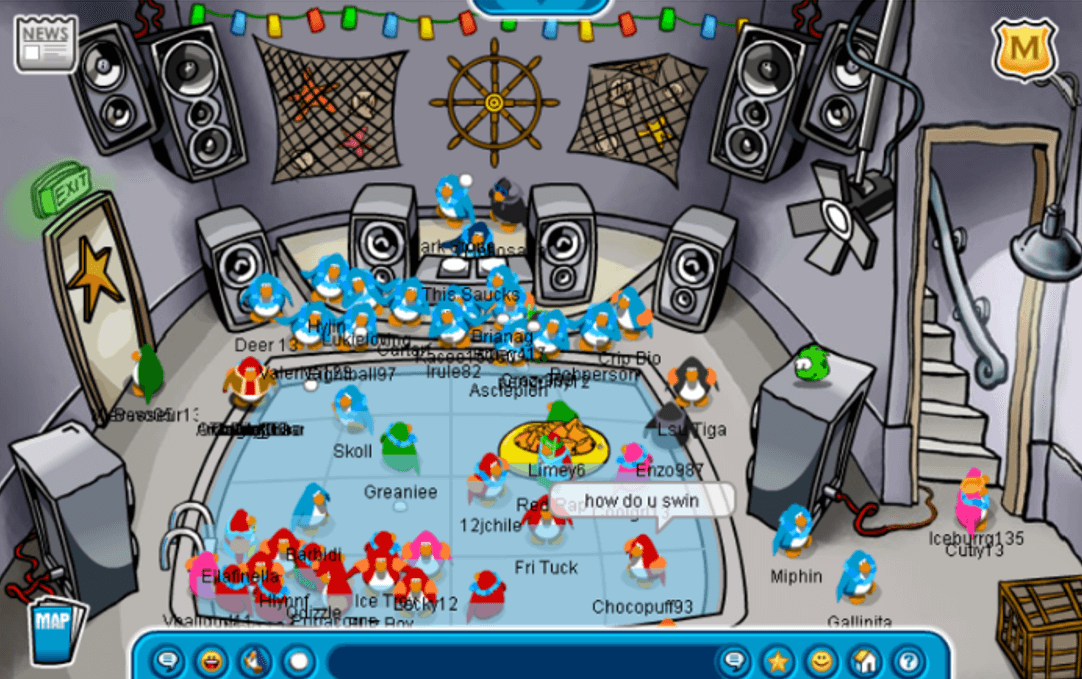 In this era of the game’s history, the decorations become more in depth, quite literally. Take the Camp Penguin party, for example. Throughout the island, a path was created that was really snow shoveled, however this was a really cool attention to detail. At the Cove, a waterfall was added, giving a lovely natural feel. This is an era in the game’s history where the room started to feel more ‘transformed’ rather than decorations. And if there are decorations, they’re a lot bigger and constructive. A good example of this is the 3rd anniversary, The Town was transformed to look like New York but the Night Club looked like Rory came along a worked on it for a few weeks.

Club Penguin took it one step further in the next three years after. The decorations became more extravagant and the transformations were more detailed and even breath-taking! The Adventure Party of 2009 is a perfect demonstration of this. The Night Club had so much detail packed into one room. The texture of the wood and the statues gave it a real Tiki-vibe, really showing how Club Penguin parties can put you in the spirt of the theme of the party. But the best thing is, these types of rooms don’t take away from the original room. But my favorite room for this party, was the Pool. It’s amazing how the team transformed a room that you don’t go to that often. It looks like a completely different game, or something out of a movie. This carried over to The Journey….

In November 2012, 4 years ago, Club Penguin went through the biggest change in its history thus far- The Journey. Not only that, but 2012 was the year that introduced takeovers. These two significant changes to the game switched about this formula.

Takeovers came first, with the Marvel Super hero takeover in June 2012. Instead of decorations or smaller transformations, this brought nothing any penguin had seen before. Rooms such as The Stage and Snow Forts weren’t even recognizable and it made us look at the way parties are made and thought as in a completely different perspective. It was almost as if the island of Club Penguin was the movie or TV show in some of the takeovers. On the other hand, some takeovers such as the Frozen Party in 2014 had rooms were it was themed, similar to the past parties. So this era of the game had a mixture of old and new, the formula was to keep parts of the ‘old CP’ era and to add parts to go along with The Journey.

And for parties that aren’t takeovers, the team vary on rooms being transformed a bit, a lot or decorations. Looking at the Puffle Party 2015. Rooms such as The Town, Plaza and Beach are changed to look like a Puffle version of each of the rooms; the rooms like The Cove and Snow Forts were changed completely to look like a water park or treetops. And then there’s rooms that have a few decorations, like the Ski Village.

To conclude, over many eras the ‘formula’ for Club Penguin’s well-known parties have seen many changes. It started off as ‘add a few decorations to match the parties theme’; ‘add detail to the rooms to feel like you’re in a certain place or celebrating a certain event’; ‘change the room’s style completely to celebrate the party feel like you’re somewhere else’; and finally ‘to something different (and unique) with each room and party’.

Thanks for reading, this post has been a joy to write!