Earlier today, the Club Penguin Island team uploaded the June episode to Island Insider! This episode was shorter than usual but still had some awesome sneak peeks, which I will share later, and a community shoutout to Tech70! Check it out!

Firstly, let’s start with the version 1.5 sneak peeks! There were two different sneak peeks in the blog version and the YouTube version of the episode, so here they all are!

This does suggest some sort of Descendants promotion in July/August, which might not go down too well seeing how it was one of the most disliked parties on classic Club Penguin! But, the Blizzard Beach event looks awesome, and that is expected to begin, based off the files, on the 27th July!

Now back to the 1.4 update! We saw a small sneak peek of Rookie’s Adventures and Megg told us we would have to help prepare the Ski Hill?! Also, we can see some Cars 3 decorations in the background of this image! 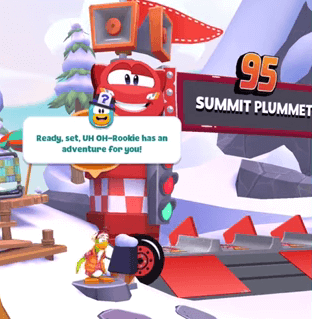 We also saw some gameplay of Marble Hunt and received information that only paid members can actually start the game, though anyone can play it. It will be kind of like a Party Supply but it looks super fun! Take a look!

Megg will also be away on holiday for a while! That’s about it in this episode of Island Insider, and we’ve seen some super cool stuff coming to the island soon! I’m personally most excited for Marble Hunt (it’s like a combination of pins and hide and seek!) and Rookie’s Adventures! What are you most excited for?

Be sure to check back for the latest Club Penguin Island content!