Today I have a theory that the Medieval Party is indeed set to return this year along with an evil villain that was last seen in 2012. This villain is named Scorn and is dragon. He was overpowered by knights at the end of the 2012 Medieval Party but he almost was responsible for destroying the island. If you haven’t read my party plot already, click here for a plot I made on how Herbert could also destroy the island.

So let’s start of by explaining who Scorn is. I’m sure that some of you might not know since has hasn’t returned in person but there have been a lot of mysteries about him. Let’s start off with the EPF handbook where he has himself mentioned in a page which I would like to show you.

Why will he return? Well firstly I’ll just give you details from that one page. The status is “concern” and why should we be considered if he’s defeated and won’t rise again? The obvious one is “His darkness may rise again”. However that is not all on that page. If you look at the bottom right on the page you will see some code. This is the Penguin Secret Agent (PSA) code. Here is what it translates to.

What about until next time? Well, I suspect that since the handbook says “Once ruled the sky kingdom”, Scorn is planning on ruling the kingdom again at a later point. Hopefully we’re talking about this year since I don’t think I can wait till 2017 for another Medieval Party. However we know something more about the dates. If you click the exclamation mark on the top right hand corner of Scorn’s profile, this appears. 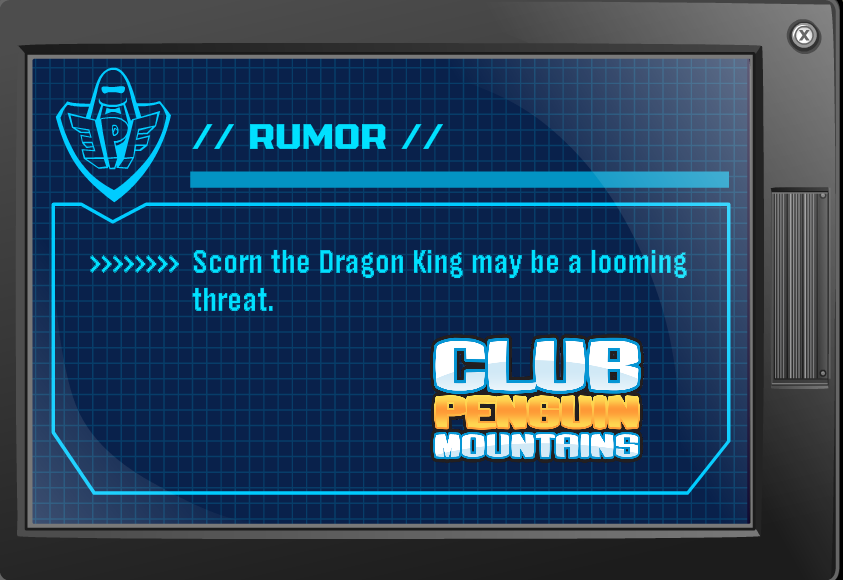 The key word there is “looming”. Unfortunately the word has two meanings and only one will actually help us decide when the Medieval Party will return. This is a dictionary definition of the word.

Scorn is large and threatening so the word matches the context but is he vague? I don’t think so so let’s look at the second meaning. So this meaning shows that the event is about to happen. Personally, I disagree that this will happen anytime soon. Firstly remember that the handbook was released in November 2015 which was a while away. Secondly, nothing has been released yet. No sneak peeks, no leaks, nothing. Thirdly, what does Club Penguin define as “about to happen”? I think that at best it will happen this year.

The Dragon King has always been in the shadows though. Literally. You may not have realised it, but if you visit the Lodge Attic, you will find a picture of who I think is Scorn. 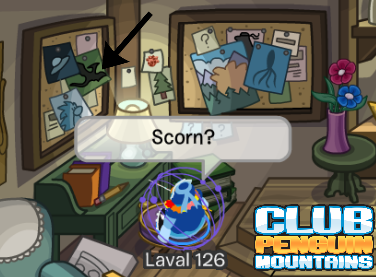 The image looks a lot like a dragon. Well, it’s just an image. That’s nothing. I disagree. Next to it is a UFO and Club Penguin have had aliens invading the island recently. I believe these images are hints to things that will happen in the future. Even if it isn’t Scorn, who is it going to be? Will it be another dragon? According to his profile in the EPF handbook he has no known associates. That could perhaps change.

I do think that these are all hints adding up to a likely possibility of the Medieval Party returning. There are just too many hints to not consider the option yet the team have said nothing about it and I doubt they have it planned yet. I’m sure lots of players would hope for this to return. A quest to defeat Scorn would be really awesome, especially for those who haven’t experienced a Medieval quest yet (and I’m not talking about chicken puffles). What do you think? Comment your thoughts!