In case you don’t know, today is my birthday (yay)! I thought that this would be a great time on reflecting how Club Penguin has made a large impact on my life, so I’m going to be going through some of my favourite things etc. I’ve been getting some positive feedback on this one-week series, which started off by talking about how I started Club Penguin, and I am really glad that you like reading about me and my experience with the game. If you haven’t already, click here to read it! Today I’m going to be letting you experience one of my most memorable events by being able to see pictures of the rooms, what we had to do, login screens and more. Without further ado, here is my favourite party.

It is the Wilderness Expedition which was hosted in January of 2011! Expeditions and adventures have always been my favourite type of parties. What disappoints me is that there have only ever been four expeditions and I really want more, but none have been around for ages. I think Club Penguin could gain lots more players if they bring back these parties. Let me explain why.

This was the party which we, penguins, discovered the brown puffle and members could adopt them for free. There were LOADS of new rooms. What I liked was that it was actually an expedition. You had to do different things. These days, it’s repeating the same mini-game. Even when the Puffle Wilderness was discovered, you would be given answers if you were stuck. Back then, penguins gave each other answers and helped you. This is one of the two login screens for the party. 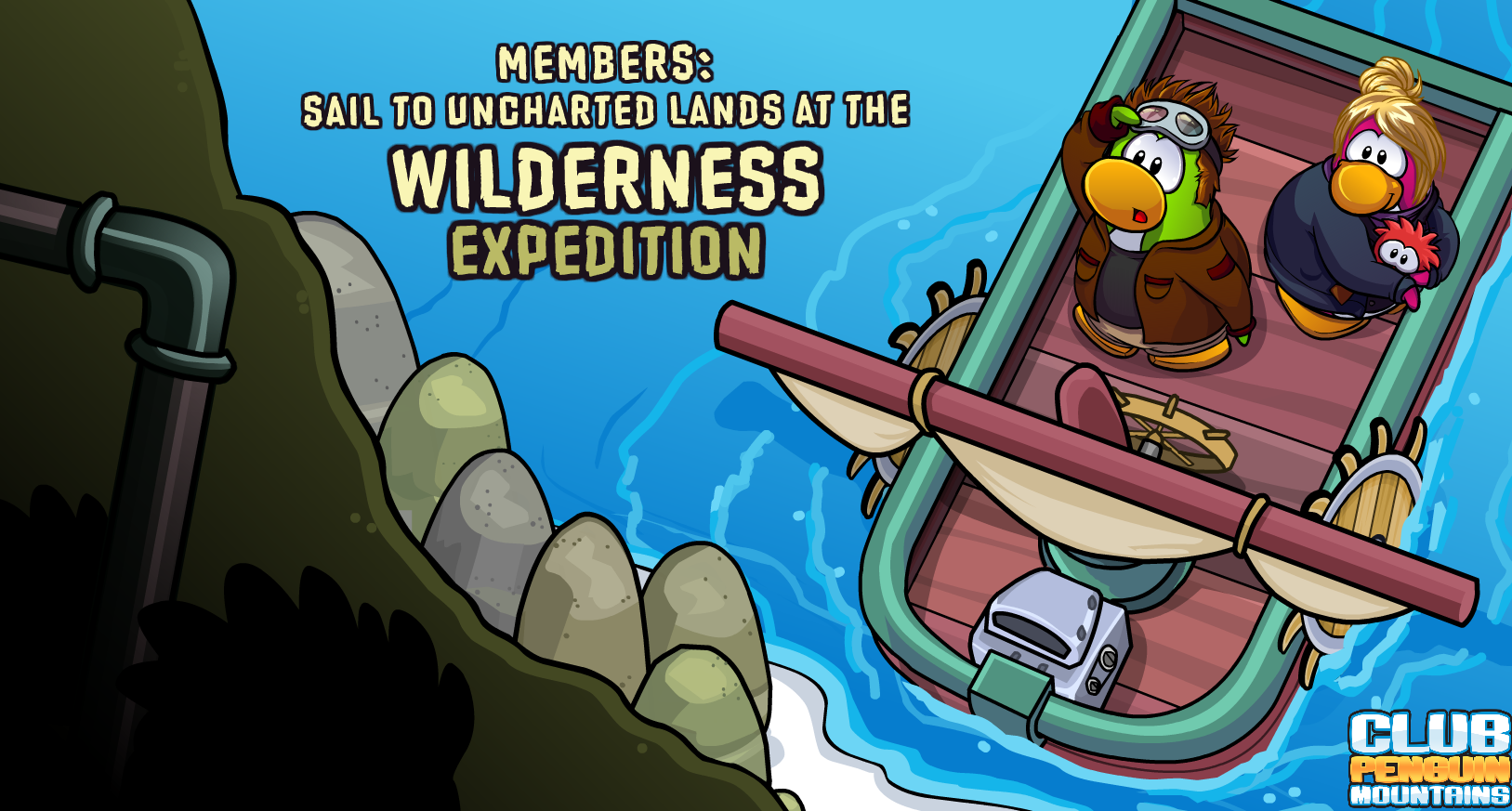 The goal was to reach the brown puffle’s cave. To do this, you actually had to go through a maze first. Players would aid each other into finding the right way out. There were five brand new rooms as well as eight maze rooms, one maze room where the only option was to turn around and head back. This is an example of a room at the maze.

Completing the maze was just the first part. After you completed the maze, you had to lower yourself down a cliff using a machine. But this wasn’t just descending after hitting a button. This was a proper puzzle. You had to hit a bunch of things all in a correct order in order to be able to proceed to the brown puffle. By saying a “bunch of things”, I mean you had to do twenty-seven things. Yup, that’s a lot more than what you would do in a party these days. Once again, the point of these expeditions is that players would work together to complete specific challenges. This was the machine you had to use. 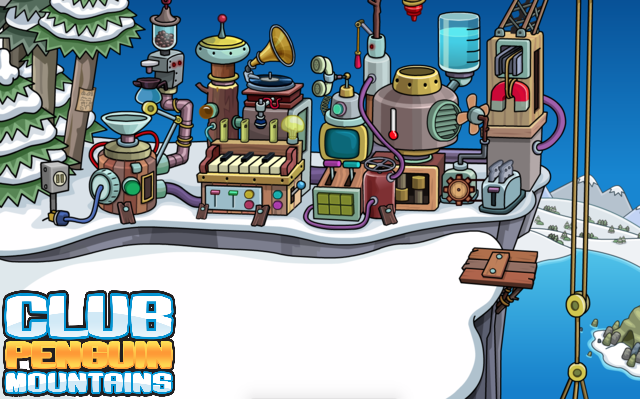 If you’re a new player, I would understand if you think that the brown puffle would be uncovered as soon as you descend down the cliff. Wrong! That was just another part of the expedition. The next part was actually building a boat because the brown puffle’s cave was on another island which you had to visit by going to sea. This was the point where the party became members only. Since we’re meant to be experiencing the party, if you’re a non-member then I’m afraid I’m that going to have to present you with this screen. 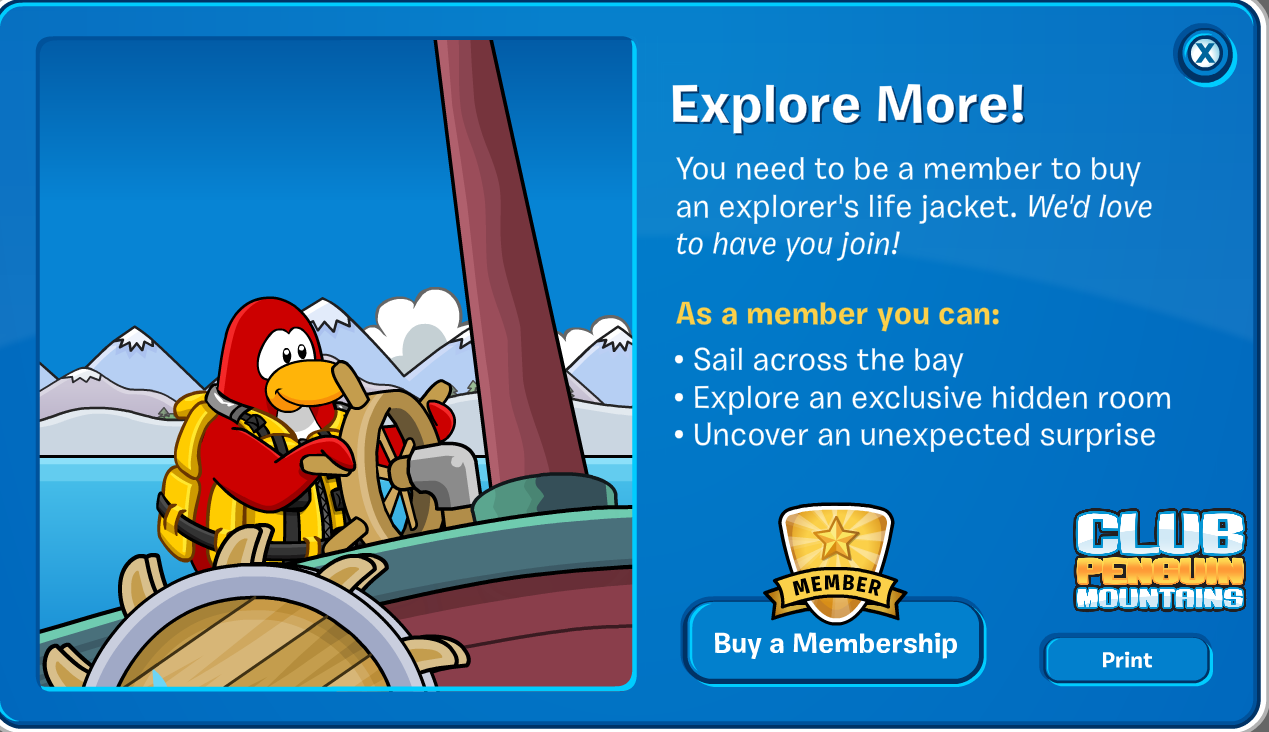 Only joking! Unfortunately even if you did get a membership, you wouldn’t be able to “Explore More” now since there have been no new expeditions for years! Once again though, getting a boat wasn’t something that just happened. I mean, this is an expedition! You had to build the boat yourself! All the parts were on an iceberg and you had to click each part in a specific order in order for the boat to be ready for sailing. Once you did that, you had to buy a lifejacket for fifty coins. This was the room before your boat was built. 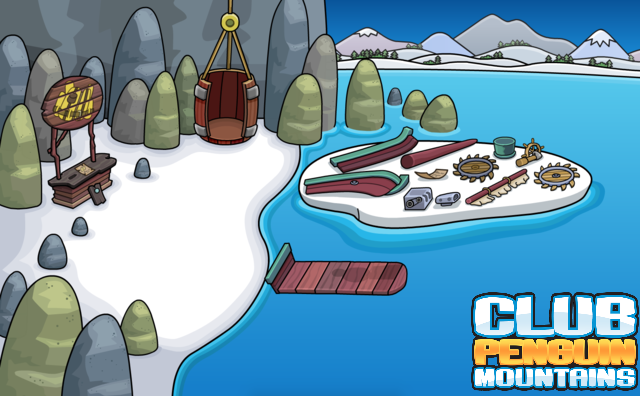 Once your boat was built, you would dock in the land of the brown puffles (it was actually called the “bay”, but land of the brown puffles sounds better) after sailing through the ocean. You would also receive one of the stamps as there were two party/event stamps you could earn throughout the expedition. There was not much to do here, except enter the Brown Puffle Cave. As you can see from the picture below, the island is scattered with gears as the brown puffles likes building things. 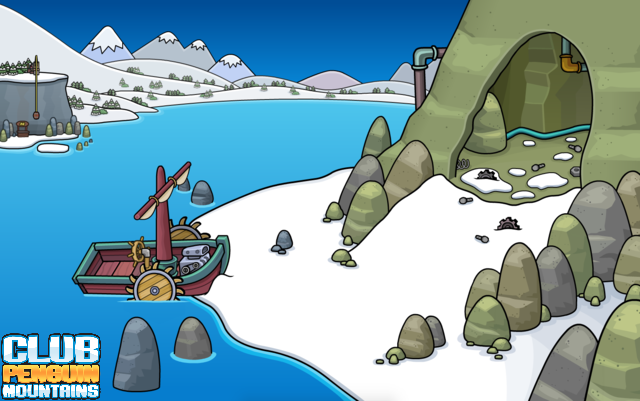 You enter the brown puffle cave. Phew, you think. All that hard work with clicking buttons in the right order and going through a maze. Now I can just adopt my brown puffle and get my brown puffle house. WRONG! There was actually a note neatly hidden in the top left hand corner of the screen. Only when you clicked this note would you be able to get the puffle. Once you did click that disguised note, you would be able to adopt the brown puffle. Of course, now you can just go to the pet shop and get it but… 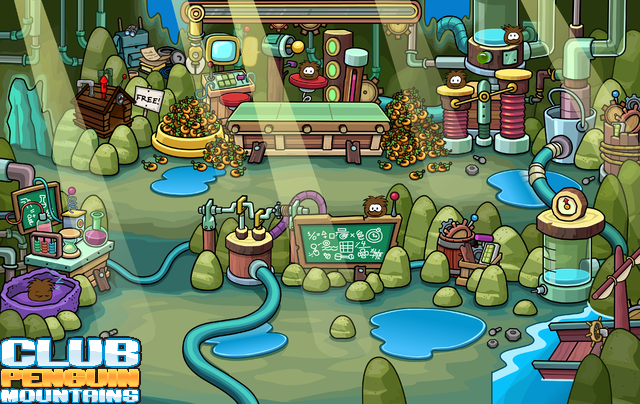 In case you want to see some music or some really cool effects these rooms had, head over to our SWFs page by clicking here. Just have a look for “Wilderness Party” and “January 2011”. The page is categorised, so you should be able to find it quickly. I managed to find some interesting things on that page related to this party!

I even remember getting 99, the maximum number of items you could have at that time, brown puffles house because, well, they were free! I have lots of good memories of this party which include working with friends to complete the expedition. I loved these expeditions and I am really hopeful Club Penguin do more. A few of my favourite other parties include the Holiday Parties. In particular, 2010-2013 as I don’t really remember much about the 2009 Holiday Party. After 2014, the Holiday Parties were not that good.

What are your favourite parties? Do you want to see this party or some sort of expedition in the future? Leave a comment below! Thank you very much for reading this. You viewers have helped a lot to make me who I am, and I am now one year older than I was last year! I do intend to make one or two more birthday week type posts, so stay tuned