So this discussion as well as the next two discussions are all going to be in some way related to Riyita. Recently some drama sparked up throughout the community after Riyita claimed to be hacked. Today I’m going to be discussing whether or not that’s true and in the future discussions, I will be talking about something which is kind of a sub-topic to Riyita. You’ll see what I mean when it comes out.

Firstly, who is Riyita? I’m sure that some of you may have heard of him, but if you haven’t he is the owner of Club Penguin Space (http://clubpenguinspace.com). He has visited the Club Penguin HQ and is a well known person throughout the community – not always for good reasons as you’ll soon find out.

Last weekend, an anonymous person made this post on his blog. At least, that’s what is being claimed. Please note that the post which I am about to share with you has now been deleted so you can no longer read it on Riyita’s blog.

This is a threat from a fan who says that they have hacked Riyita’s email, Club Penguin account as well as his website. He claims he’s doing it because Riyita is un-interactive with his followers. Before I reveal the option of this hacking business being false, this is what I have to say about this post assuming that some fan did actually carry out the hack.

Regardless of Riyita not being very interactive with his fans, hacking is the wrong thing to do. Also, let’s compare it to some other bloggers. Take Polo Field for example. Although he has left Disney now, whilst he was a moderator for Club Penguin he couldn’t communicate with us. He was able to years ago, but for a while of his time at Club Penguin, he was not allowed to tweet to us or anything. Did someone hack him? No. Sure, he was a moderator and all but we learnt to accept it. Why can’t we do the same with Riyita? For all we know, Club Penguin may not let him talk since he visited the HQ. Some people suggest that he actually works for Club Penguin.

Personally, I think that that theory is most unlikely. I mean, what are the chances of an ordinary blogger being a moderator? Granted, he does have close connections to the team and you will see more of that tomorrow.

Next, I want to mention another possible theory that has been going around the community. What if Riyita was only pretending to be hacked and he actually hacked himself? That seems crazy, but it does kind of make sense for a few reasons. This is a theory someone posted on Twitter which I would like to share before I reveal the reasons why I think Riyita might have benefitted by hacking himself. 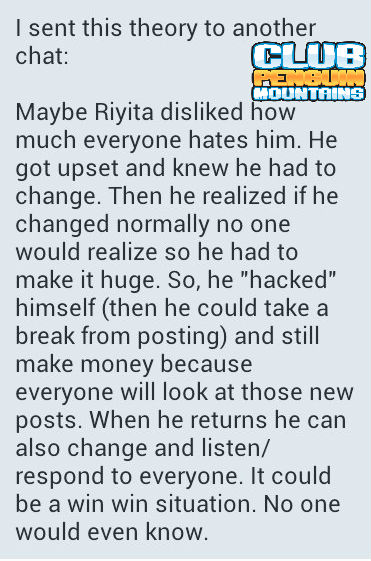 Before I talk more about the message, I just want to comment on this whole “hating Riyita” thing. Personally, I do not hate him but I respect him. As a blogger, I do know how much time it takes to update a website. Although I personally don’t make money from my website, I don’t see anything wrong in doing so. Riyita has worked hard on his website and I believe it is wrong to criticize him for getting money from that site. After all, Trainman1405 does and I’ve seen no complaints there. Loads of people dislike Riyita and I don’t get why.

One user believes that people hate Riyita because he doesn’t give credit to his sources on his site. I will have a detailed post about this soon. But I mean, come on, is hating Riyita for that small reason okay? I don’t think so. Also, the reason I am sharing a lot of tweets is because from what I can tell, most of the drama sparked up in the Club Penguin Twitter community as well as the blogging community for reasons you will see in the next discussion.

Another way for this to be a win-win situation is what Trainman said. Riyita probably would have gotten loads of views. However, I disagree. Riyita even closed his website for several hours. This doesn’t add up. Why would Riyita close his website if he did quit to get more views and therefore money? If I was him, I would have kept it open but he only kept it open for a few hours.

So what do I believe? I think that the chances of a hacker hacking his website, blog and Club Penguin account and not doing any damage other than making a post is highly unlikely. I also have no idea what kind of hacker would confess to making a mistake just a bit later after claiming he made a hack. So that suggests that I think Riyita did make up a hack but I don’t see why he would do that as you can see from my last paragraph. In the next discussion, I will have a bit more evidence to present forward another possible theory on why this hack took place.

Why the hack happened remains a mystery and who did the hack is an even bigger mystery. There are numerous theories but Riyita isn’t talking. He wants this issue hidden as he deleted all posts regarding this incident on his website. It was recently Safe Internet Day and this is a good reminder to keep your password strong and secure.