In my last post, I discussed the hacking of Riyita. If you have not done so already, I suggest you read it and you can do so by clicking here. Before I start the post, I want to hint an extremely rare but exciting series which I might begin. I’m not going to reveal anything about it now, but it’s not what you would expect it to be so stay tuned. Now onto today’s topic.

So, around the time of the hack on Riyita, an email was leaked which showed conversation between Riyita and Megg. The email explains how and where he gets his “exclusives” which literally cannot even be found on the CP Wiki, and they have everything. Very quickly, it was concluded that he was getting them from Club Penguin directly. However, I was surprised when I first read this email. This is because he went to the Club Penguin Headquarters/Office a while back and I expected he made some sort of deal where Club Penguin would provide him with information for his website, Club Penguin Space. This was the email. 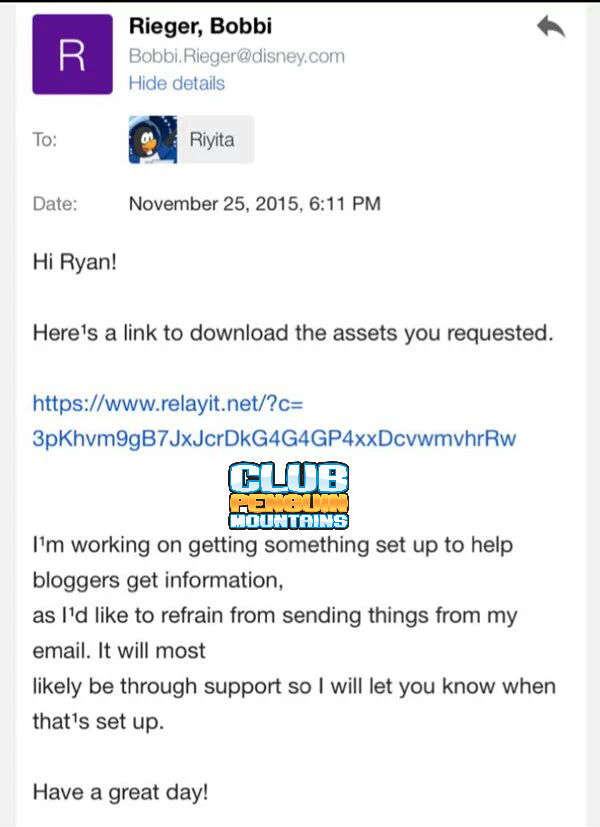 That was the email sent by Bobbi who is Megg on Club Penguin. You may be thinking that this is fake, however I can confirm it’s not as I will be showing you a reply from Megg about this later. Firstly, let me tell you my thoughts.

I think it’s fair to say he did make some deal with Club Penguin as Megg says that he requested the assets. The email also seems so casual, like Riyita has been receiving a lot of information. Now, although I do mainly discussions and ideas on here, I know that it’s a big deal when a website gets an exclusive first. Before this site closed down, I was posting every piece of news about the game of Club Penguin. Getting an exclusive was really hard and rare, but here’s Megg just giving them out.

So Megg has claimed that she is trying to set something up so bloggers will get a list of information. Hopefully each blog gets something different regarding #ProjectSuperSecret, but I’m not so sure. It’s been three months since that email was set and I don’t see what’s so difficult about helping bloggers get information. Get a list of bloggers, start sending out emails.

Also, why Riyita? Sure, he visited the CP HQ, but so did another user called Pup1one. He didn’t make any deal. Perhaps it’s because he has a large audience. Trainman1405, who blogs on Club Penguin Memories, does also but he has confirmed that he doesn’t get any exclusives. It seems a bit like favouritism to me and I’m not the only one who thinks that too.

@BobbehJean Seems like favoritism at it's finest to me.

Some think you need to visit the HQ to get the “special treatment” but as I said, how come Pup1one hasn’t got any exclusives? Is it just because he went before November or is it because his blog doesn’t get as many views as Club Penguin wants? Also, I can’t believe they actually agreed to Riyita’s request for the “assets”. It seems highly unlikely a blogger could just ask and then they get it. The team hardly acknowledges blogs*.

*Can I just take a moment to thank Polo Field, a former Club Penguin staff member. Polo Field actually even followed this blog when it didn’t even have that many views. He also followed a lot of other Club Penguin fan-blogs, and I’m sure that that meant a lot to the blog owners because it certainly did to me.

Next I’m going to discuss Megg’s reply to this issue. Surprisingly, she responded quickly even though she rarely speaks about Club Penguin related issues. This is what she posted on her personal Twitter account. 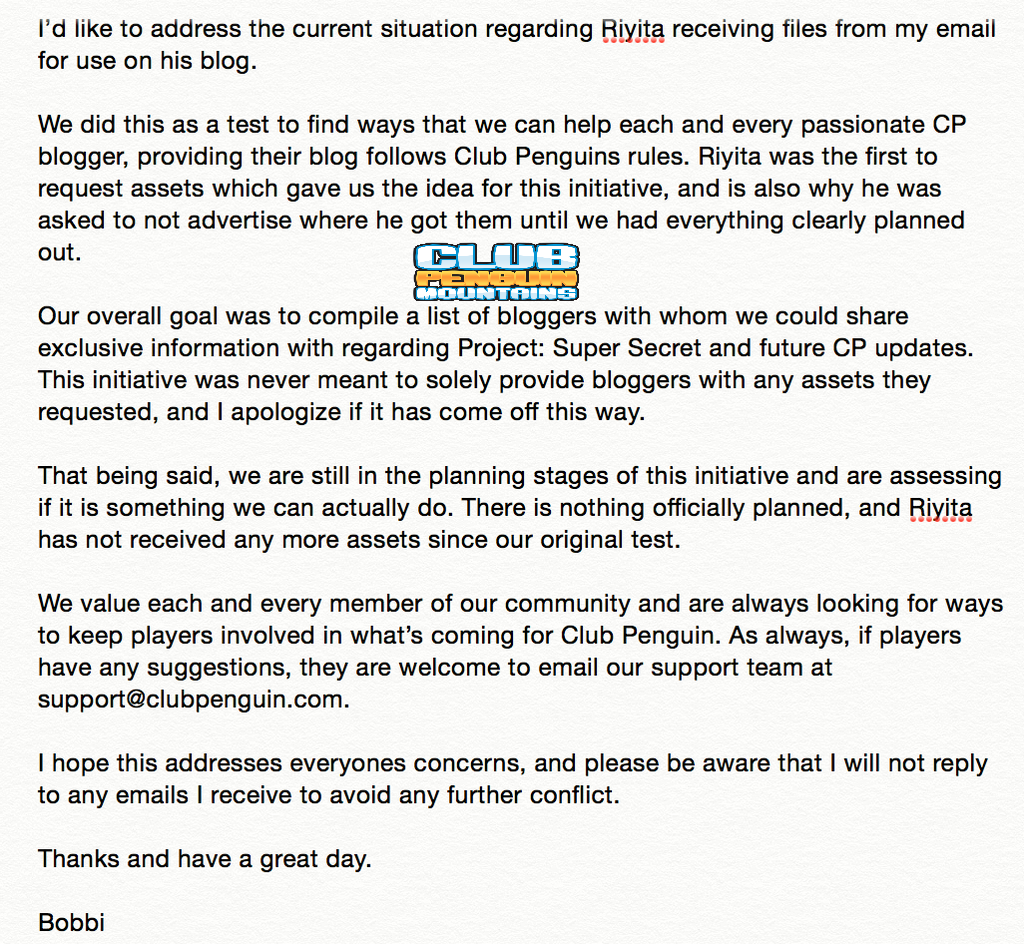 Before I begin my criticism, let’s just pretend that everything Bobbi/Megg is saying is true. I think it’s great that they care more about Club Penguin blogging throughout the community and I completely back this idea, except for the few problems I am about to highlight. I recently read that Billybob did something similar back in his time, but I can’t say that for certain. There currently is a lack of communication between the older community who are the ones who often run blogs and Club Penguin. So, here are my problems, firstly starting off with this Riyita issue.

Honestly, how long does it take to compile a list of blogs to give spoilers to? It’s been three months and they’re still planning, although even though nothing has officially been planned. Seems slightly fishy to me. Also, why did Club Penguin want to hide it? I think that Club Penguin knew that this would be fishy which is why they kept it hidden. People want to know the ideas planned as this is something big. Unfortunately, Club Penguin had to make their move and release the truth (assuming that this is all true, even though I’ve spotted a few contradictions) since the email was leaked.

Also, are we talking about Club Penguin here or just Megg? I phoned Club Penguin twice so that I could hear the answer from different people and none of them knew about this scheme despite the fact they claimed that they knew about blogging.

I am also concerned with how this would turn out. How limited would that list of blogs be? I expect loads of blogs would be disappointed if their name is not on that list. Project Super Secret is what people will be wanting to know about the most, and Club Penguin has released so little that I doubt they’ll give loads of details for blogs to finish. Then I expect people would complain that this blog is getting a major update on Project Super Secret, yet their blog is getting to know the pin for next week. Surely it’s better for Club Penguin to post something like this. 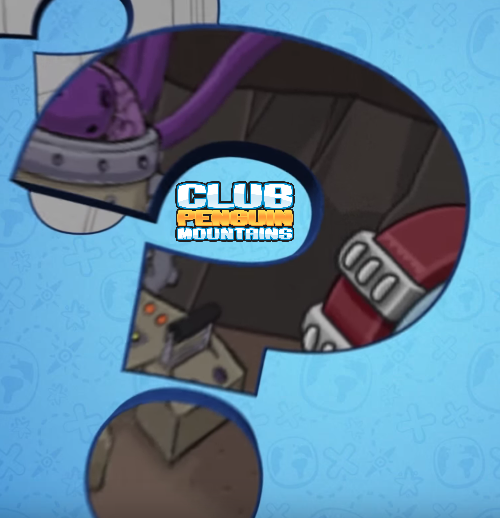 This was in the “Best of 2015” video. It’s still a sneak peek, no doubt. But this way blogs could come up with their own unique theories and post them online as I have seen so many people done, including this blog. To see what I think a few of the question marks are, click here. Using this method, you could avoid a whole lot of disappointment. Don’t get me wrong, I still love Megg’s scheme but there are lots of flaws. Hopefully these have been addressed in the three months Club Penguin has had to plan this scheme; probably more since it was three months since Riyita got his assets and they would’ve needed to plan that.

Thank you very much for reading this discussion which has reached over a thousand words. I did mention that I planned a third and final discussion relating to Riyita but I’ve managed to forget what that idea was. If I remember, I will post it but if I don’t, I think that I’ll kick off this new series I’m planning which I’m sure you’ll be really excited to hear about. Also, for those of you on holiday like me, enjoy it!