Before I start this final post in the Birthday Week series, I just want to say two things. Firstly, this series seems to have got a fair amount of positive feedback. For this reason, I will occasionally talk about my Club Penguin series or share a story I experienced in the game. But next time, I will be continuing with some more discussions. Secondly, some of you may have read the discussion on me getting banned forever. If not, you can do so by clicking here. Just to clarify, that was regarding my second account. Today I’ll be discussing the ban on “Torres 126”.

So, let me start off. I’d been banned four times before for being rude, revealing personal information (can I just state that I knew the person who I was talking too), cheating and swearing. Fairs, that is a lot of bans but remember that those bans are across five years. Today I won’t be discussing all my bans but my last ban, but keep this in mind. Why was I banned? Cheating.

Alright, let me explain a bit about cheating. At that time (and still now), all rare items are “patched”. This means that they can’t be hacked meaning it’s impossible to hack things such as the beta hat. Why Club Penguin doesn’t patch all items, I don’t know. Now, a while back an exploit was discovered to hack patched items. No, this is no longer possible to do but for the time at which it was possible, people would take advantage of it including me.

You could get any item. This is a screenshot of the adder which I got from the owner of the program at the time when the adder was capable of adding rare items. Some of you may recognise which site it is, but remember that if you’re caught cheating you could be banned like me. 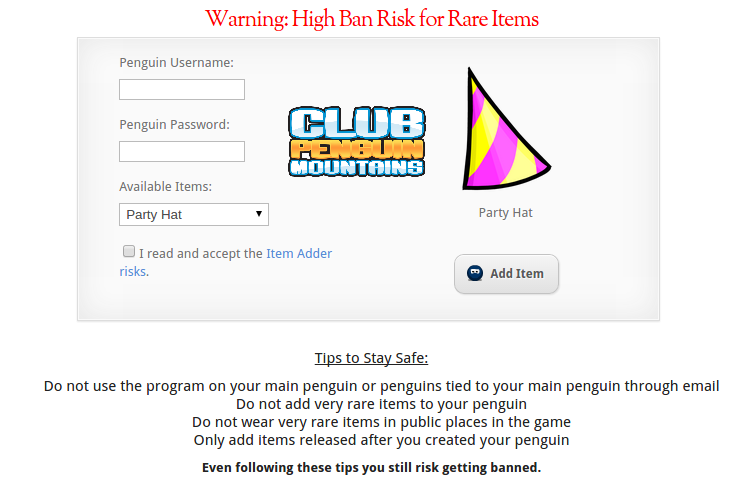 I’ve always wanted that red lei. Finally, I had it along with my wonderful Thunder Blade which is just a rare sword. I only hacked these two items. Now, here is the thing. Drama exploded because of Club Penguin’s recklessness. I’m not just talking about the exploit. I’m talking about something else.

Innocent or not, your penguin was at risk. If anyone emailed Club Penguin reporting you, they would just ban you without checking. That’s how serious this situation was. I tested this and it was indeed true. However forget that. Some people said they hacked and I did report them. Now, listen up, whenever you report someone, don’t say “I reported you” and I’ll explain why.

I also hacked. They said that they’d report me. Tensions were caused and drama exploded all throughout the community. Each day, more players were stating that they got banned. The fact was though, I banned myself for cheating.

My attempts to email Club Penguin admitting I reported myself did not work. I was banned forever and when my parents called them, they said that they wouldn’t unban me as I had five bans. I mean come on, five bans in five years. Ridiculous!

The lesson is not to use cheats, penguins. I don’t want this happening to any of you because it was, and still is, really frustrating to be banned. On a happier note, we reached 18K views yesterday! I am really thankful to all of you who helped achieve this and I am planning some sort of giveaway for a Card Jitsu code. However, I don’t like just giving codes and I prefer doing contests. I once did a contest on what you your favourite party was and why. Stay tuned for that.

Waddle on (if you can si-I’ve already said this before in my discussion on getting banned)!