Today’s discussion is a little bit different compared to the posts which you usually read on this site. I’m going to be talking about a Club Penguin video Pup1one recently uploaded. I thought this video was an awesome video which is why I’m going to share it with you today. Pup1one has kindly given me permission for me to publish his video on this site. It contains a unique story about puffles, aliens and penguins! Make sure you watch it as otherwise there is no point in reading this discussion! I’m sure that you’ll enjoy it though!

This is probably the best Club Penguin video I’ve seen, and I’m sure that you could say something similar. I really like how the puffle is the narrator and how the puffle explains how wonderful life was without those pesky aliens. I’ve already made a few posts on those aliens, one of which is an idea on how to stop them. You can read that idea by clicking here. Then, the abductions happen.

We’ve all been expecting the grey puffles to be a mysterious puffle which we could adopt. Yet no one really considered this idea except for Pup1one. I think the idea that sad puffles turn grey is a really unique and awesome one. Then I considered something. Why couldn’t this come to Club Penguin?

Well, I could only think of two reasons why not. Firstly, Club Penguin has taken all the fun out of puffle caring since they no longer run away. What used to happen if you didn’t feed them, play with them or let them sleep enough is that you would get a postcard that your puffle has returned to the wild. 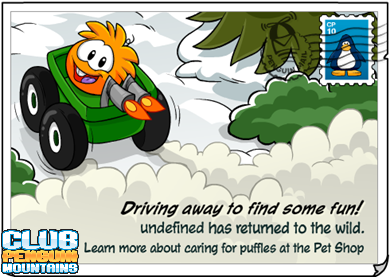 I don’t think that Club Penguin want puffles to run away or be sad anymore. My second issue is that why wouldn’t people just make puffles sad on purpose? I mean, surely some penguins would want to make their puffle sad by not feeding them so that they can walk around with a grey puffle whilst everyone has a coloured puffle. This would encourage people to make their puffle sad, but for this video it was a really good plot.

The animation in this video was great! Bear in mind that although the video was about Club Penguin, it wasn’t filmed on the actual game. This means that creating a video like this is extremely difficult. Pup1one said that it took around a month to make this video.

@thetechblaze it took a scattered month but then, non-stop 4 days of pure editing

This got me thinking. Wouldn’t it be cool if Club Penguin created short animations again? They did occasionally create one, but a new one hasn’t been made in ages. Hopefully after #ProjectSuperSecret, they will consider making more. This grey puffle video would be the quality I expect from the team themselves, yet alone one person in the community. Let me explain to you the main bits I liked in the video, because quite honestly I liked all of it.

It’s awesome how the puffle is the narrator of the video, and starts off by showing how perfect everything was in black and white. This makes it feel like a memory. The music is great too! However, what I loved the most is the unique idea of puffles that are sad being grey and how Pup1one cheered the up. It’s also great how he managed to include the alien crisis in the video.

I can only imagine how much hard work it would have taken to create that video, but it has a great plot! What did you like about this video? Do you want to see more posts in which I share what other penguins have done? Comment below! Special thanks to Pup1one for making this great video and allowing me to feature it on Club Penguin Mountains.