Today another #ProjectSuperSecret clip was released by Megg, which you may watch by clicking here. Today I want to talk about something very interesting which I saw in the video. I’ve put together a theory of something that might happen once Project Super Secret is fully released in 2017. This is a picture of what helped me create my theory. 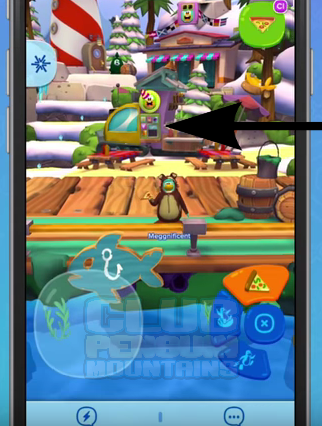 In my eyes, that looks suspiciously like a vending machine. Although it could be a machine for clothes, I think it’s more likely for food seeing how this sneak peek was based around pizza. But usually with a vending machine, you pay money to get something. In this case, food. Why would you want to spend coins on food? At the moment, there is the Pizza Parlour and the Coffee Shop but you don’t need to go there. It’s simply for role-play.

What if that changes after Project Super Secret releases? What if penguins need to eat? My theory is that penguins will have to eat food after a certain amount of time. I think that this a rather cool idea as we would have a whole range of options to choose from, like fish from Ice Fishing. What I struggle to figure out is the consequences for not eating. It’s not like you can die from starvation in this game. What will happen if we just avoid eating? Will we lose coins? These are the questions that need answering.

This machine could just be there as a decoration but since there is a button on it, I am doubtful. It’s going to be really interesting to see what Club Penguin comes up with around this idea of penguins having to feed themselves. I am actually really curious to see how this will turn out. I’m sorry that this is such a short post. I didn’t know what else to say!