I have got some amazing news to share with you. We have analysed a video titled “Club Penguin is the Illuminati” by Bacon CP and we have made one of the most shocking discoveries of all time. Bacon is on the right track, though this is not exactly what we believe.

Disclaimer: This video is being published on Club Penguin Mountains for entertainment purposes only. Every time it is viewed, Bacon CP also gets a view and no money is earned therefore making it fair use.

However, Spike Hike tweeted about this video and what he said in that tweet is definitely not a coincidence. He said the following: 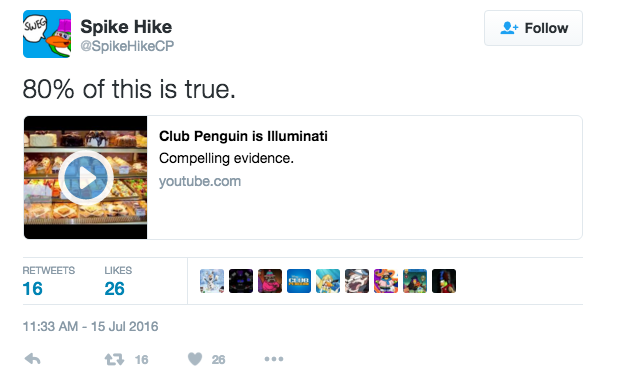 Eighty percent of this is true. What does this mean? I’ve figured it out!

With this in mind…what else do we learn from the video?  The woman was playing Pokemon Go. However, she was holding her phone landscape, not portrait, which means she couldn’t have been playing Pokemon Go! But we also learn that Spike Hike has plans with Nintendo. At 1:22, Bacon picks up the four water bottles as a reference to Megg. But I disagree.

So that leaves one possibility…there is a new Nintendo game coming related to Club Penguin. When would they strike? When Project Super Secret releases. After all, Craig Voight told me that some of the game is being created with Maya. I Googled and it turns out you can use Maya to create some parts of a DS game. What does this mean?

#ProjectSuperSecret isn’t mobile only nor is it web only. It’s Nintendo only.