This month, Club Penguin celebrated its 11th birthday, so lots of players have created videos, blog posts, art. You name it! I’d also like to cover #CPReunion, and of course wrap up this post with another interview. So let’s just get right into the Club Penguin Mountains October Community Profile!

I’m going to start this post with a bit of a sad note. Since King89698 became Penguin of the Week, you are probably aware that he recently passed away, which is very sad. I’d like to thank Pingu15cool and Rosytilly for informing the community and putting their talents into remembering King. However, I’d really like to thank Orangeee, who made the header above as well as logos which were used by countless people throughout the community. I’ve nominated him for Penguin of the Week as this was an amazing thing for him to do. I suggest that you do to! The chances of becoming Penguin of the Week are tiny, but since Orange deserves it, if we all nominate him, we can make it happen, just like how we made King Penguin of the Week!

I asked two really talented artists if they would be happy with me sharing their Halloween artwork, and they said yes! You may recognise this first artist’s name as I made a post a few months ago featuring one of her artworks. Well, Pingping4069 made a Club Penguin Halloween drawing this month which I’d like to share with you! She described it as the “longest Club Penguin Halloween fanart she’s done”. 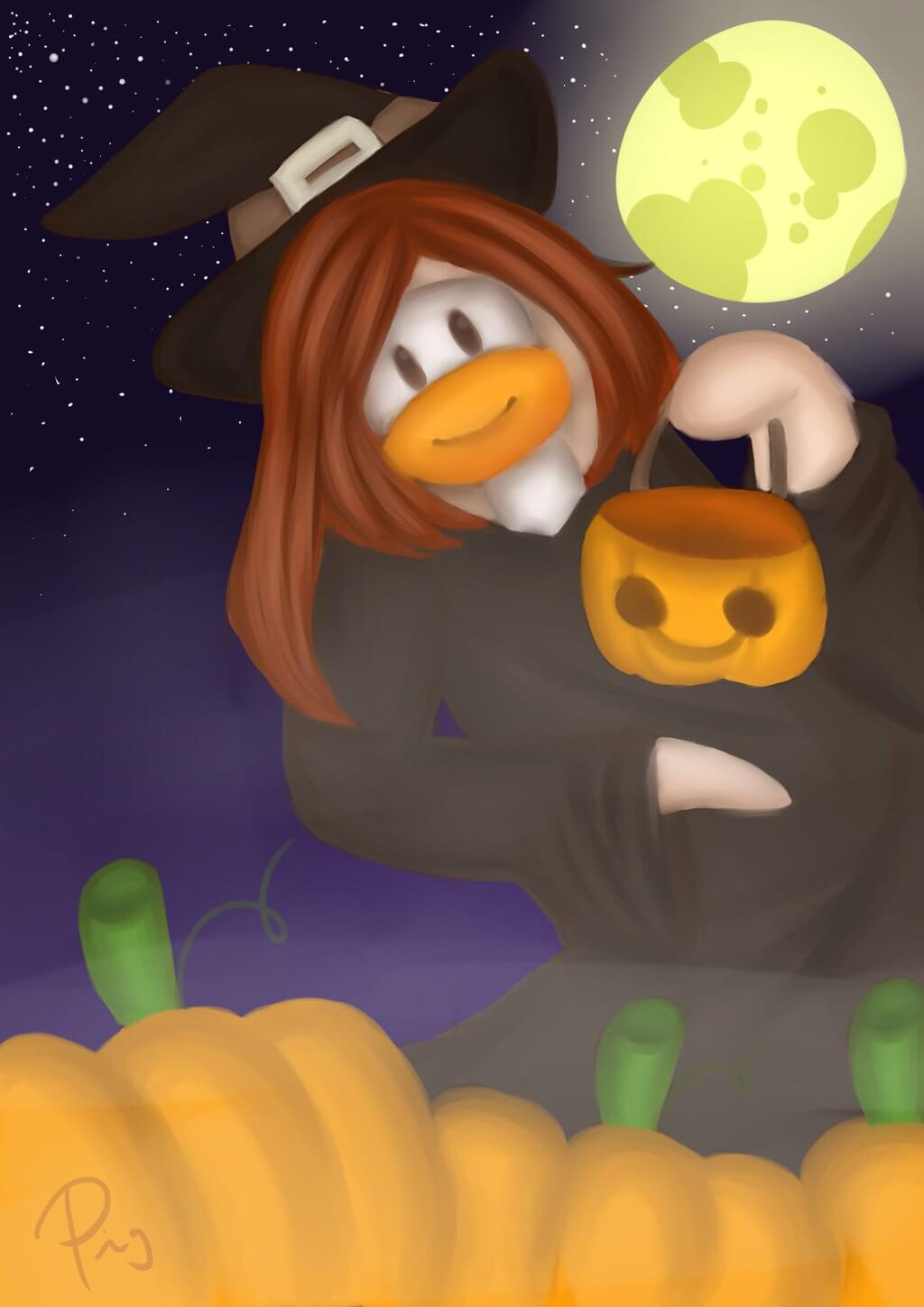 I must admit, it looks absolutely amazing! She also drew a really impressive portrait of PH, the Puffle Handler. Take a look! 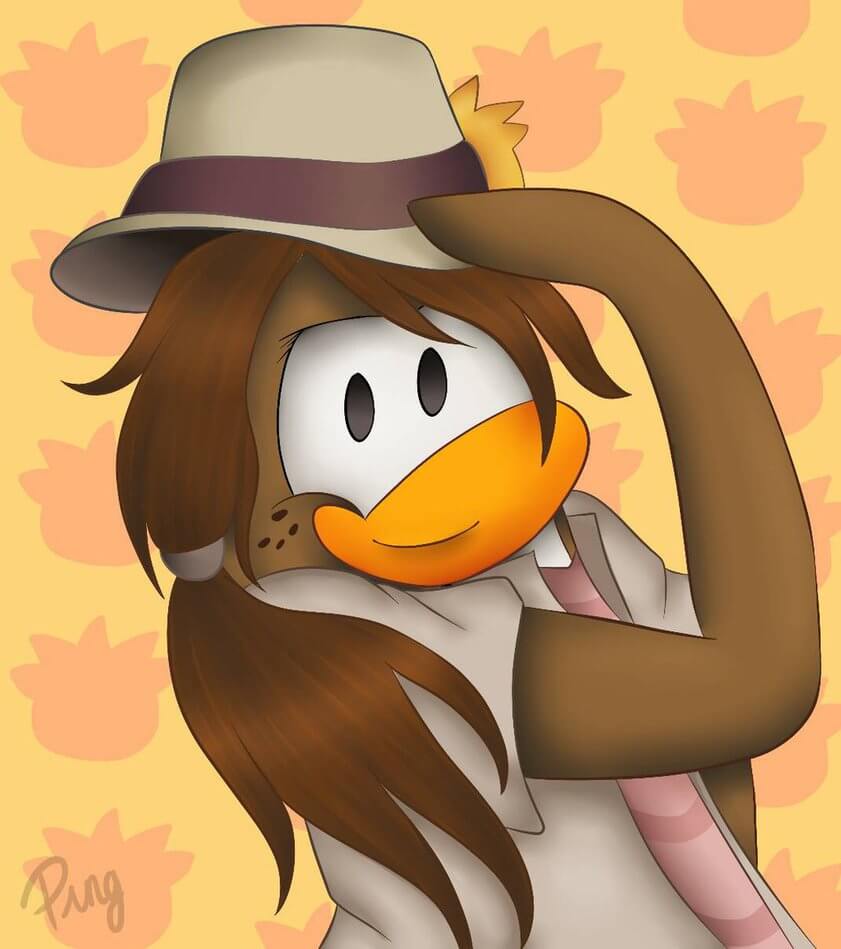 This drawing looks so realistic and I bet you want to see more artwork from Ping! You can do so by checking out her DevinArt page and her Twitter account, where she posts all her drawings. These are only two of many more!

The next artwork I would like to show you is from an artist, you may be familiar with, but like with all artists, if you’re not, you should definitely check them out! Squeky10 gave me permission to feature a few of his artworks! Take a look at his latest Halloween one! 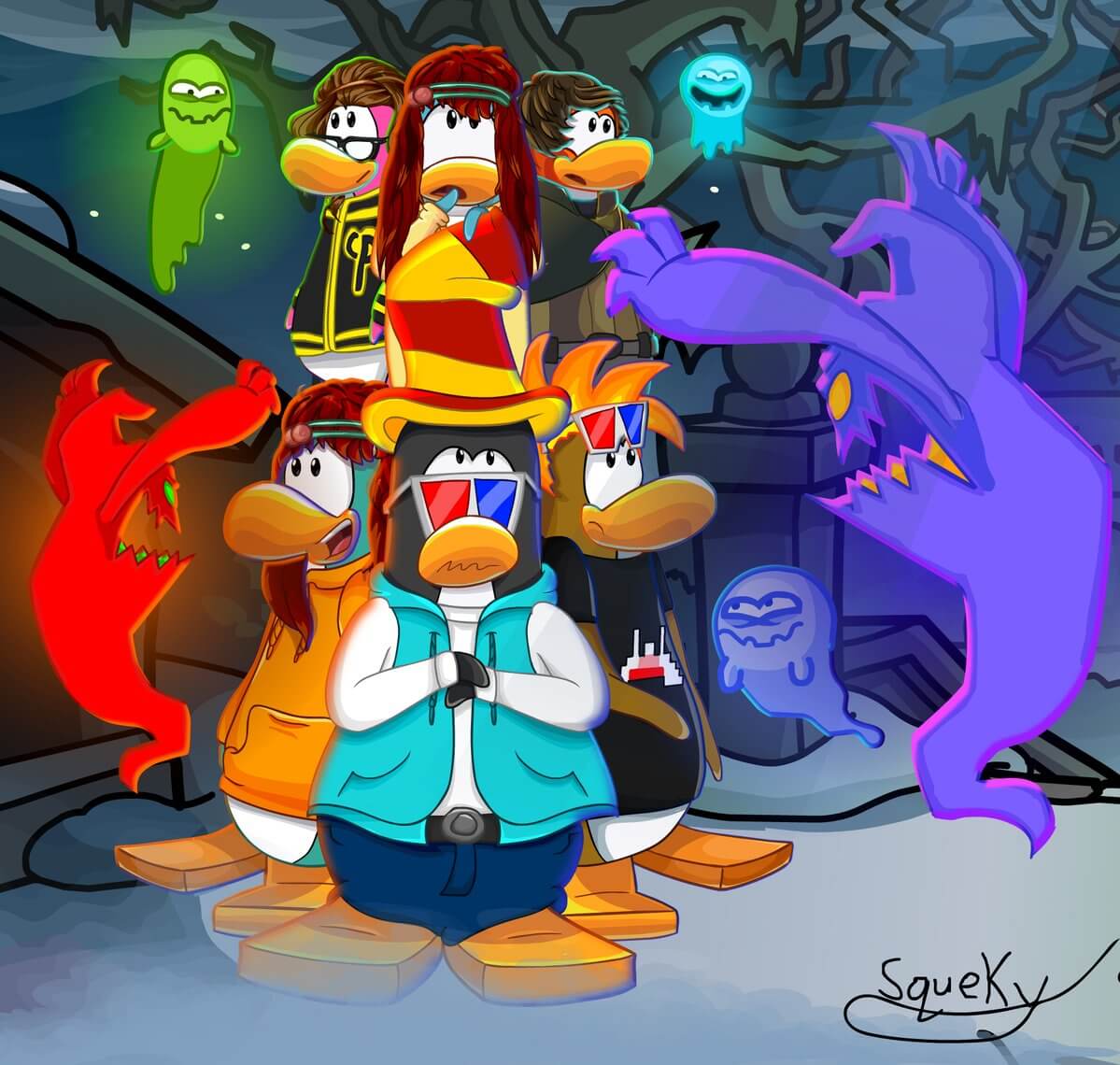 I find it absolutely spooktacular! If you’re interested, Squeky also put a speedpaint of this artwork on his YouTube channel, which I will link you to! Before that, here’s another one of his artworks! 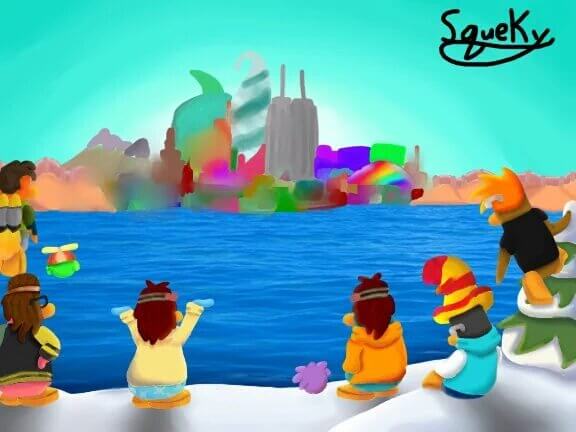 I love this art style! Along with drawings, Squeky also does Club Penguin animations and digitalisations, so be sure to also check out his Twitter as well as his YouTube channel!

A good friend of mine, Michael56292, sent me his 11th Anniversary Fan Art! Check it out! 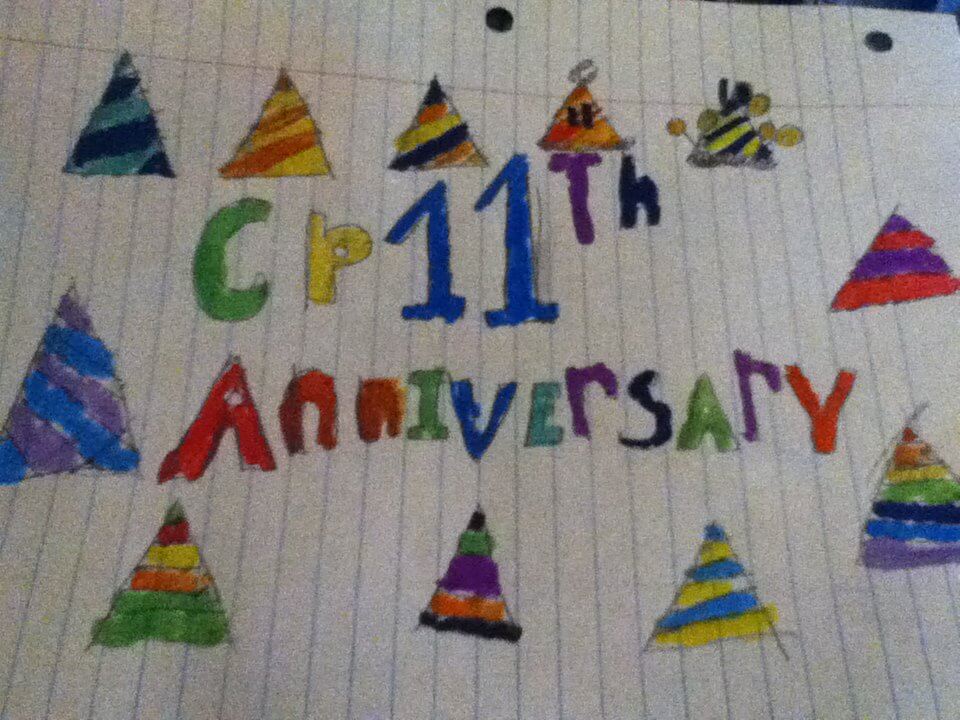 This definitely is not as good as the first two we’ve seen, but I really like it! I love the concept of having each and every anniversary hat that we’ve had surrounding colourful text. The 10th Party Hat looks the coolest, in my opinion as it looks like the real thing. Thanks for sharing this awesome artwork!

I’d also like to thank Yellow35166 for creating the Club Penguin Mountains logo which you see here! It will be included in the Music Jam header which will be published as part of the November update! 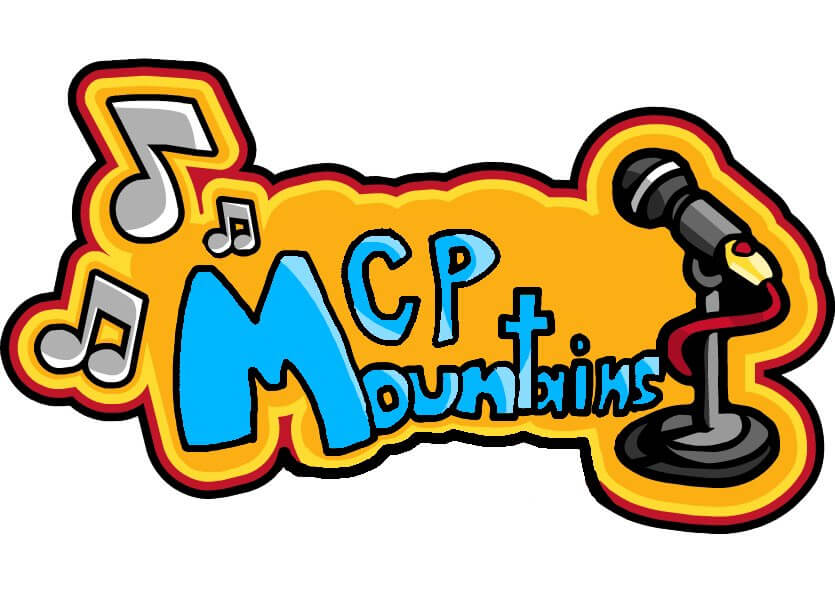 In September’s Community Profile, I only featured blog posts which I liked. Well, today I’m going to feature a new blog, a blog series and a blog post which I really liked, but it is one which you most likely have already read.

Blogtober has been a series on The Blue Blog in which Blue21102, the owner, creates a daily journal of life as a penguin. It’s a really awesome series with lots of humour inserted into it and lots of chances for players to get involved. By the time you’re reading this, Blogtober will be over, however, you can still catch up and Blue21102 has other amazing posts such as detailed, in-depth discussions!

You may not have heard of Club Penguin Seasons as Thankful only started the blog a few weeks ago. As such, the pages are still being worked on. However, Thankful strives at uploading daily content. Unlike other blogs which post things such as the new pin or the new newspaper, Thankful has short, unique content which gets straight to the point. Usually you might learn something about Club Penguin’s history which you never knew before.

You will almost certainly be familiar with Trainman1405 and his blog, Club Penguin Memories. He’s not posted in a while, however at the beginning of this month, he released an extremely informative (not that I’d use any of this information – of course not!) post on hacking Club Penguin accounts. It’s a rather long post, with it being over 4000 words, but it truly is worth the read because I enjoyed it and I am sure that you will too!

For all videos, clicking the border of the video will redirect you to YouTube, where you can subscribe to the person featured or check out their other videos!

Club Penguin 101 is a series created by BeefyPenguin9 which gives you lots of information about a certain topic in Club Penguin history. It has lasted for five seasons, however this twenty four minute episode is the final ever CP 101. Beefy talks about life as a penguin from 2014 till 2016 and covers the parties we’ve had.

We’re about to cover Club Penguin Reunion, the biggest party of the year, however I’d like to start by showing you a video of the event taken by Jojimaxcp. Jojimax was in the rooms where the moderators were, which might seem simple, but the server was really full! 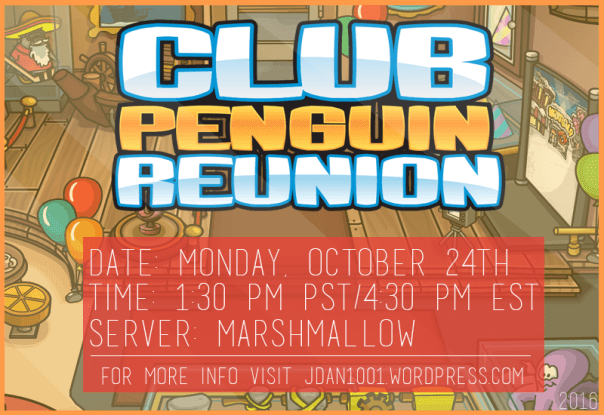 Without a doubt, Club Penguin Reunion was the most anticipated event of the year. Jdan1001 hinted it’s return, and it was such a great success last year. This time it was not as great, after all it was invaded by bots, but penguins such as Businessmoose, Chrisdog93 and Sqaishey were sighted. However, Megg, Deamama, Pirates, SheepVSGravity and a few other moderators spent an entire hour with us!

The story begins two hours before the event is planned to begin (21:30 PST) at the Coffee Shop. Deamama popped in for an early visit and I got a postcard from her! Many of us chose to stay in the Coffee Shop as we anticipated that the server would fill up quickly. After all, Megg did talk about it on the What’s New blog. Unfortunately, I disconnected an hour before the event began and couldn’t get back in to the Coffee Shop! 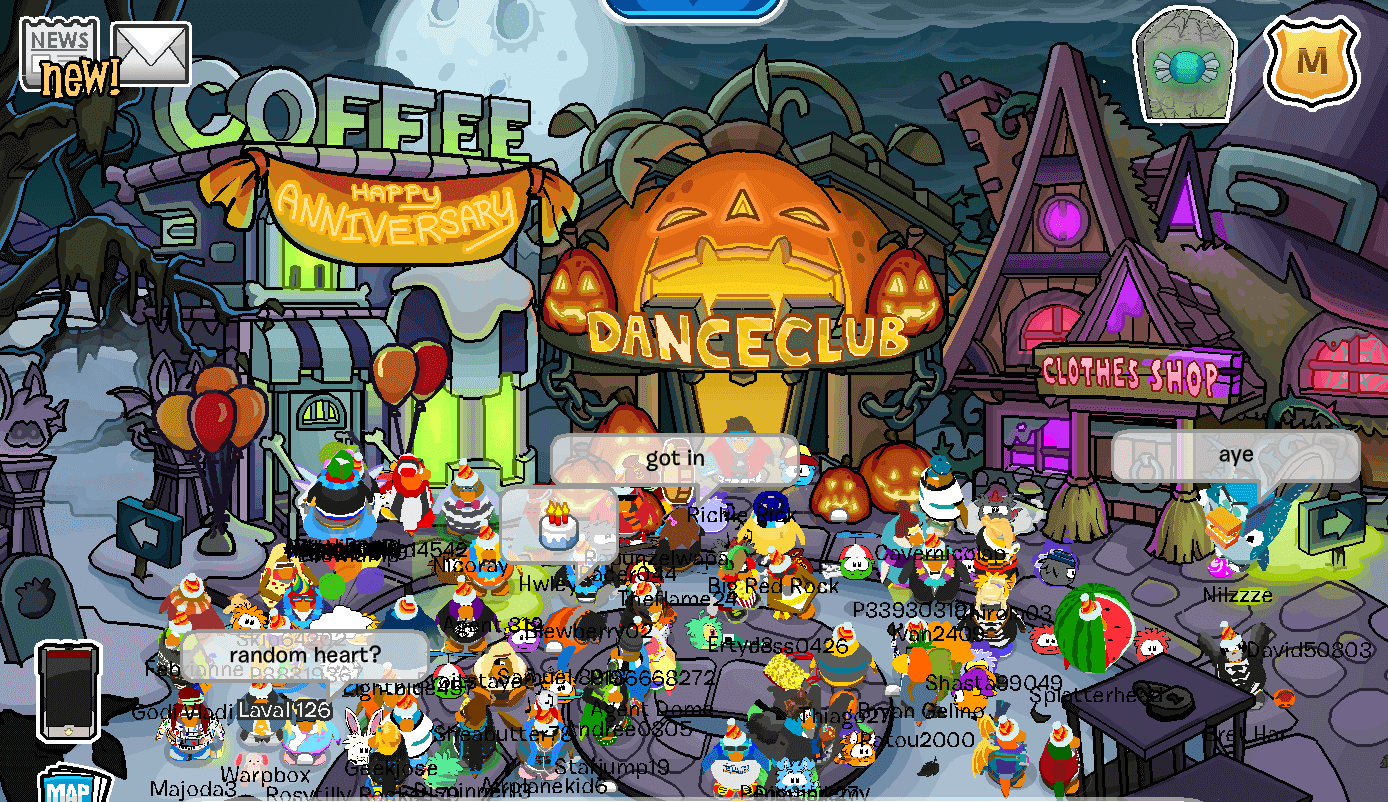 A few friends gathered at a spot in the Town waiting for the event to begin. When it did begin, the normal happened. We all split up in chaos trying to get a postcard from the moderator which we liked. In particular, I wanted to add a Businessmoose postcard to my collection, but I heard he left early after being surrounded by bots. He was surprised by them, but was not angry at them, which was an interesting reaction to have! 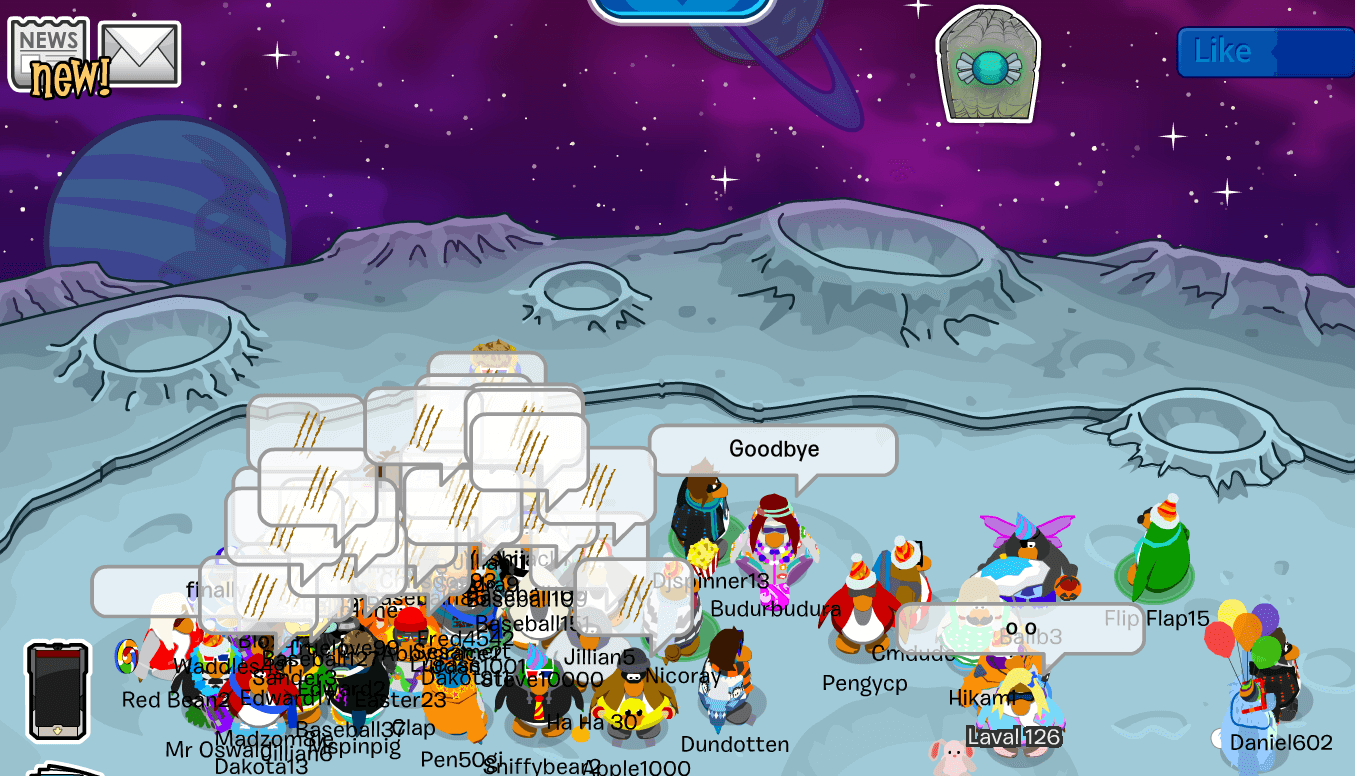 Many rooms were full and it was risky leaving a room to find a moderator. There were bots filling up the server and it very quickly became clear that this party was not going to be as good as last year. Even a few of the hosts admitted that! There were no sightings of Rsnail, Screenhog, Polo Field, Spike Hike or Billybob, which disappointed many. It just didn’t have that awesome feel to it, but it still was a great party. The hashtag was also trending on Twitter. Along with my postcard from Deamama, I got one from the person who copied content from Saraapril. 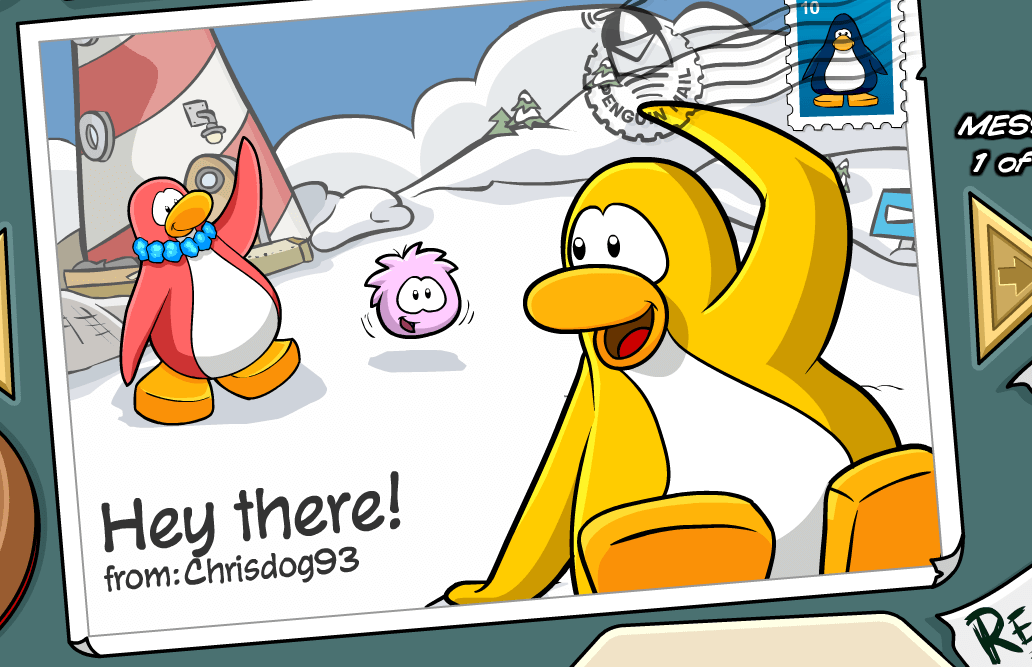 I’d like to thank all of the Club Penguin Reunion staff for making this event possible, along with the former and current staff members who took time out of their busy schedule to interact with us.

Interview of the Month

You may be aware of the Drama Diaries I created on Bobby7506, but before that, I interviewed him for Community Profile. It’s a bit late to change that, and I promised you an interview. I’m very reluctant to publish this, but Bobby and I have made peace and we both apologised. He admitted that he was wrong and just angry. So let’s please thank Bobby7506 for this months interview!

Torres 126: 2016 has been a year hated by many players in the community, including myself. It’s a time of uncertainty for Club Penguin, leading up to #ProjectSuperSecret, even though we had an “update” very recently. What are your thoughts regarding this?

Bobby7506: I’m quite excited but very nervous to experience PSS. I have a feeling it we’ll never be as good as Club Penguin. I also worry for blogs as its hard to picture how us bloggers will manage to make new posts on a new game that we’re all unsure of.

Torres 126: If you were in charge of Club Penguin, what do you do?

Bobby7506: If I was in charge of club penguin, I would add a feature which allows you to get rid of inactive friends on your buddy list so you could make new ones.

Torres 126: How has Club Penguin impacted your life?

Bobby7506: Club Penguin has impacted my life so much. It was my childhood and everyone used to play it. I’ve bought a lot of memberships and toys and I’ve always been into it. Club Penguin is the only thing I’ve ever been fully addicted to. It’s made me who I am today 🙂

Torres 126: One of the things that you are working on is “Jolly Penguin”. Could you please tell us a little more about this?

Bobby7506: EEEEK! Okay, okay! So I guess I could tell you some sneak peeks of Jolly Penguin and what we hope to happen with it 🙂 This project was made purposely to bring the community together and celebrate happiness. Christmas is one of the most joyful things around and I thought we could party and celebrate with the theme of it. I also liked the fact it comes once a year and there are 4 parties. The last party (finale) will be the big grand one and I hope as many penguins join us on that celebration.

Torres 126: And finally, is there anything else that you would like to say?

Bobby7506: I’d just like to say that this community is amazing and the amount of work we create and new things we discover and try is breath taking. I’ve made some amazing friends and I will never forget them.

I am part of the Jolly Penguin team, and we really aim to make this idea a reality! I’ll keep you updated! I did originally have more content about Jolly Penguin, but unfortunately I deleted it. Once again, please thank Bobby7506!

Tonight I’ll be uploading Halloween Panic. Until then, have a great day!