Here are random thoughts which I could not figure out how to structure and I just wanted to share. I’ve wanted to make this post for a while on how the Club Penguin Island team could influence and help bloggers.

Firstly, this is not for my personal gain as I suspect some people will think. Everything I say here should be for ALL bloggers, and I apologise in the event which I’m unintentionally biased.

Side note: I did some research for this post. I found nothing but I did see all these old blogs. Wow. Just, so nostalgic. The WordPress.com old blogs that were so simple. Wow. Take a look at this page by Saraapril if you’re interested. Okay, let’s begin with the actual post and things I don’t expect to happen. 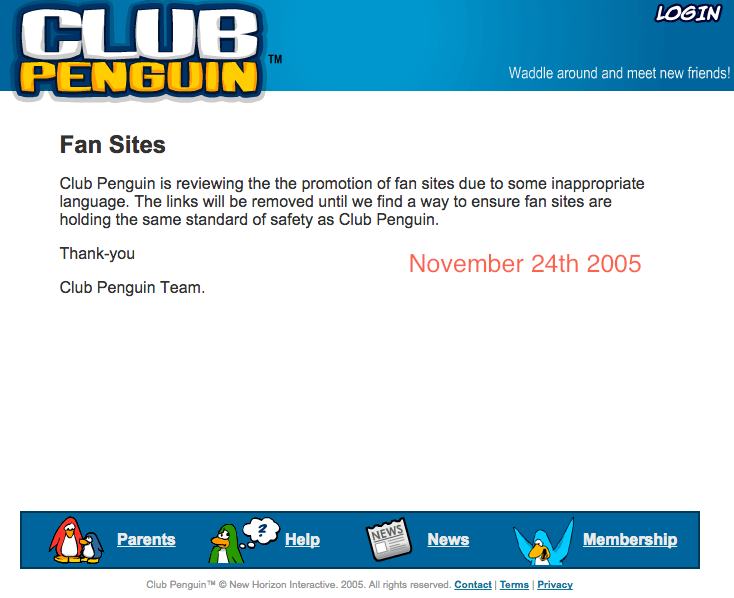 Did you know that in 2005 you could submit your fan-blog to the comments on the Blog and he would review it. Sometimes, he would even put a link to it on the official website! As you can see above, this didn’t work out for the reasons blog could place swear words for other kids to see. But this was the start of supporting fan-bloggers.

Some lucky bloggers even received exclusive stuff in the mail. Once again, something I don’t expect to happen. Unfortunately throughout last year one blog constantly received exclusive pins, but I still don’t think that this will continue anymore. The point is, the team have previously taken fan blogging as a big deal, but I feel it’s not so much of a priority anymore. I mean, they used to show fan-blogs to new recruits. Let’s look at things which I feel could realistically happen. Commenting on posts.

I trust the team when they said that they read fan-blogs. It would just be really cool if they occasionally left comments on a post – particularly those which are opinion/discussion/idea based and not really news posts. It could just be something to address that post. Since interaction has returned on Twitter, people have been happy, but imagine interaction on fan-blogs!

Creating a WordPress account to follow blogs too would be great. This happened by Polo Field in 2014 and it literally made me so happy when he followed mine! Now, don’t get me wrong, I completely believe that they read fan-blogs. But I’d like to give some more ambitious ideas which I feel could possibly happen.

I don’t think fan bloggers ever got access to this support team email but I will talk about this in a bit. Why not now though? It’s never too late. Here’s my main idea. It kind of ties in as to how Billybob used to give bloggers “packs” to use back in the day.

The team take a sneak peek. Let’s use igloos for example. It’s a basic image, but the team simply cut it into a few pieces. These are then distributed to fan-bloggers who can only post their image – they can’t take post others.

It’s up to everyone else to then piece the image together and form a proper sneak peek. After a few days, all bloggers can post the full image. I’ve scaled down this idea from just giving content-creators a look at new stuff to post a week before the update. This would build up hype – it’s what mobile games like Clash Royale do. This would still be amazing though.

So how would it work? Firstly, if you do choose to take part in this “scheme”, there needs to be a non-negotiable, published for all to see criteria involving no favouritism, which I will discuss in a bit. Here’s my idea of a criteria containing three basic things:

Audience would be hard because that would once again bring back favouritism. Also, some blog types have a different view counting, which would make it more unfair. This is all about removing unfairness!

So how does the Support email tie into this? Well, firstly, it would be an easy way to clear up any uncertainty by knowing you’re talking to someone who knows about this scheme. But also, back in 2016, Megg said exclusives to a large blogger without anyone knowing until it was leaked from her personal email. She publicly posted this so I assume it isn’t a problem me sharing this to benefit the discussion.

I don’t want to use this as a negative, but I will say that favouritism should not happen with any scheme that takes place. Instead…THERE IS HOPE FOR THIS IDEA! Megg said that it was a trial and that they wanted to compile a list of bloggers which they could share exclusive information with.

It’s been over year. The team must have got passed the planning stage now. Club Penguin has a history of hiring the best Community Managers and this is not an exception. I would really like Megg to make this official and really turn it into a reality.

That being said, I do want to give my idea of how I would compile this list. I would make some form that opens once in Summer and once in Winter for a week. Something simple – your penguin name, email, blog with a few details about it and whether or not you agree to the published criteria.

The team then get back to everyone with this special email and explain if they have been accepted or declined. The list is then made with people being put randomly in order. Something (whether it be a full image or a piece of an image) gets given to every blogger who meets the criteria. They go down that list ensuring everyone gets something before the list restarts and maybe the form is opened again, depending on how they do it.

This would be my idea to support bloggers. Commenting on blogs, a great start! But this sneak peek system would be more than “just cool”. I would put it as “ideal”, not really “essential” though you could argue “necessary”.

If you disagree, please do leave a comment! This post took a while to make. Let’s hope that the team can make this happen!