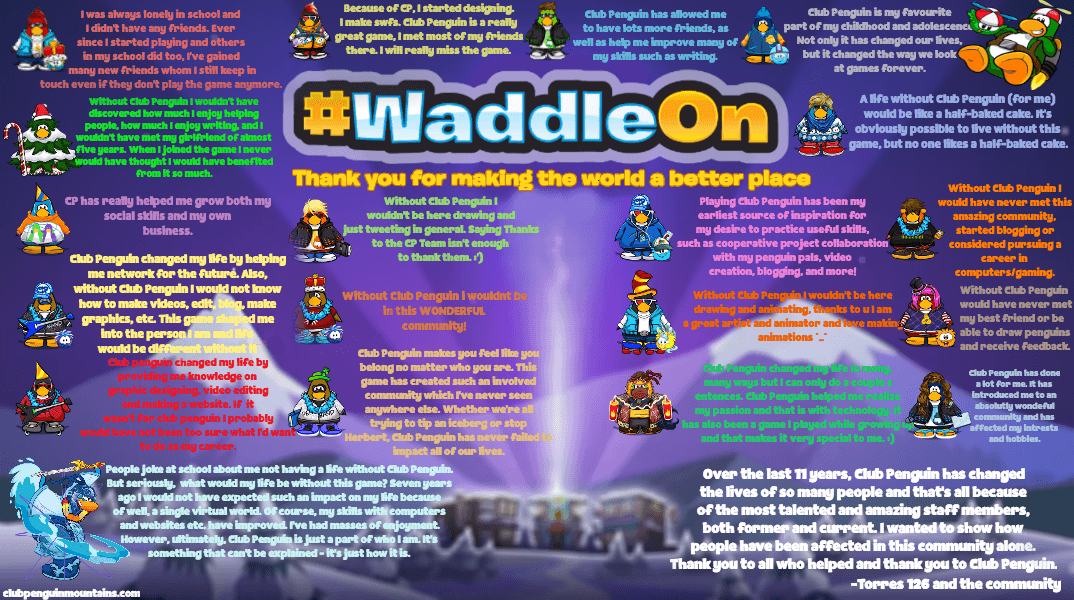 To the Club Penguin staff members both former and current – all of those around the world, no matter if you were/are in Support, an engineer, an artist, a manager or a co-founder:

There are a matter of hours until Club Penguin ends but many people have argued that the last eighteen years worth of work has gone to waste…I wanted to prove this wrong. Club Penguin has made a difference in the world and progressing to a new island won’t change it:

Club Penguin means something to people. It’s made people’s lives better and I want to focus on that. So thank you, thank you for making the world a better place. I assembled some thoughts from the Twitter community and after 4 hours, this is what I came up with:

And it gets bigger than just personal reasons, from helping people. After all, the 2nd of the 3 rules a potential buyer would have to accept in 2007 was that 10% of profits had to be donated to charity…and when you have over 300 million registered accounts, that 10% makes a huge difference to animals and people.

All we, as a community, would like to say is thank you. Using words makes it hard to describe the massive impact this game has made. This post isn’t scheduled and the reality of the game closing has really made me appreciate how much of a difference it has made personally and internationally. The game that has been out for 11 years may be ending in a few hours but the difference it has made will not. Please keep making the world a better place!