In case you missed it, in celebration of World Penguin Day, Megg and ZexyZek were at Times Square doing some promotion for our island. 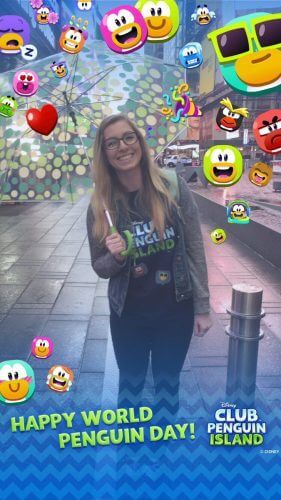 We’re lucky enough to have a few pictures of the event, some exclusive merchandise and an interview with one of the two people in the Twitter community who attended. I would like to give a MAJOR thanks to Emeraldkik who provided most of the images in this post and allowed me to ask him a few questions!

Firstly, let’s take a look at Good Morning America, a television show in the USA which CPI was featured on. There were even three new penguin designs which the team made for the video!

Along with TV promotion, there were adverts in Times Square and the Disney Store! This is an interesting choice since you’d suspect most of the target audience would be at school but hopefully they’re still on there now. 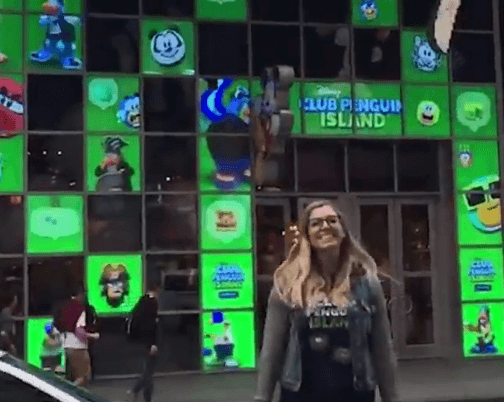 Players who attended got to meet Megg and ZexyZek as well as receive some merchandise and get the opportunity to speak to them! That’s awesome and would probably be my favourite part if there was ever an event in England!

See those little emoji things? Here’s a quick look at what they’re like.

Those who attended got to keep all of the emojis as well!

Also, remember the pin which Megg got a few weeks ago? Those were given out at these event as well!

I really would love to get my hands on one of those pins or emojis but I completely understand it’s an exclusive! That being said, Emeraldkik will be giving a pin away once he reaches 100 followers on Twitter. If you are 13 or older, you can follow him there!

I was also very lucky to have the opportunity to ask Emeraldkik a few questions about the event.

Q1. What was the event actually like? Was it just Megg walking around with a few Club Penguin Island adverts around?

A. The event was small it was some staff members recording things they did not have a table or anything it really was just a recording session.

Q2. What did you do?!? Were there any activities?

A. I talked to the staff and asked them questions what they thought about cpps [private servers] and other juicy things like that

Q3. How was it like to be able to meet Megg?

A. The best thing was meeting megg! She was so nice and I can report that she gives a good hug!

Q4. Do you think it successfully advertised Club Penguin Island? Were passers-by interested in what was going on?

A. They did a good job advertising. With the ad at the Disney store and over the good morning America studio

A. They are very sad to see Club Penguin go and they know a lot of the bugs that happened. And the next Club Penguin Island event in game will be a cars event

There it is from a visitor himself! There will be a Cars event on Club Penguin Island and Megg gives good hugs! Also, we believe that there will be an Island Insider on this event, though this isn’t confirmed.

.@clubpenguin Island is filming something in Times Square for #WorldPenguinDay pic.twitter.com/cXxZcXG1QW

What was released last night was a little video of some of the stuff that took place behind the scenes during the Times Square event. Very awesome!

Megg also released this amazing photo announcing that there would be more adventures! *flippers crossed an event in England!*. Also the pins are like, transparent, which is very cool.

In celebration of World Penguin Day, the team also announced that up to $50K would be donated to protect penguins with $1 being donated for each game download in the US or Canada and shared an activity book which you can check out here.

What an awesome way to promote Club Penguin Island! I would like to give a massive thank you to Emeraldkik for most of the photos and for the interview as well as the team for hosting such an epic event!