A huge amount of leaks for the Club Penguin Island 1.6 and 1.7 update have been revealed overnight, covering igloos, a new area, new mini-games, events, free membership and more!

Some really exciting information has been revealed and I can’t wait to share them with you, however I would like to start by thanking Dj Stores and MrKcyre for all of this exciting news! Be sure to check out Dj’s exciting Club Penguin Island blog here!

We start with Find Four…or should I say Fossil Four! It is also possible that this game could also be called “Dino Four”. The winner will receive 30 coins and 5 Aunt Arctic XP and you’ll have 20 seconds to place your chip and try and Connect Four. Second place will earn 20 coins!

Here’s some of the code found for igloos, but it appears that they will not be coming in the 1.6 update and likely not the 1.7 update. However, it does show that the team are working hard to try and get them out soon!

It appears that a new Loading Screen will feature the Town which could potentially mean that a Town will be coming in the 1.7 or 1.8 update! I posted about this a few months ago but it seems the team have definitely made progress developing this new area!

Other new featured marketing load screens will include DuckTales and the new party game. Talking about DuckTales…

We already know that the Disney Store for 1.6 will be themed around DuckTales, however thanks to Dj Stores we also are now aware that a lot more DuckTales things will be coming, including:

Rookie has a whole load of new adventures coming! We already received a sneak peek for chapter two yesterday but now we have some more details, such as Rookie will have three new levels making the new max level 24.

There will be 5 new adventures in Chapter Two and Dj Stores kindly revealed the name of these:

Alright, this news is extremely exciting but I’ve saved the best for last! The next two things are sure to excite most players…and I mean “most players”. However, please note that the following details are not confirmed and anything could change as these are just leaks from the files which can change.

Starting from 8th September, a random Pizza Event will be held on the island! You will receive the following party supplies:

This seems like a nice little random event which players will enjoy, but there’s still two more to come!

I think the concept of this event is really cool though and a nice way to carry on from the Online Safety: It Starts with You campaign. Hopefully it will continue to bring penguins together!

A few days ago, I made a post sharing that there would be stuff for Halloween. It turns out that from Monday 16th October, the Halloween Event will begin and it will contain new decals and fabrics! That’s all the information we have for now and I’m really hoping to see the island spookily decorated for this event as that would be amazing! 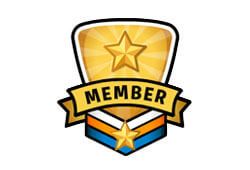 Lastly, and perhaps one of the most exciting things coming for new players and non-members, there will be an All-Access Weekend from Friday 6th October (12am) to Monday 9th October (12am). FREE MEMBERSHIP!

This essentially means that everyone will get membership, meaning that non-members can finally play the adventures to gain some extra XP, wear the clothes they’ve designed, spend coins and everything else a member can do!

This weekend will have it’s own special home theme screen and I hope that the team will advertise this event properly too, as many of the players I’ve asked said they would check out CP Island during this weekend.

No dates have been revealed officially yet though it is still a possibility that the update will be coming in September! We will get official news with the update notes of the 1.6 update this week.

However, altogether, this is some really awesome news and makes me feel much more excited for what’s to come after three hideous Island Insiders. Don’t forget that we also will be getting puffles and igloos sometime soon, so that’s even more to look forward to!

But once again, I must thank Dj Stores and MrKcyre for allowing me to post all of this information and I really appreciate them sharing it. Thank you very much for reading and be sure to check back for more of the latest news and guides!