It’s a shame. I was hoping to not have to make this post for a while and that I could focus rather on a celebratory one. Unfortunately. I was wrong. Disney is likely trying to take down Club Penguin Rewritten, which has caused anger to many players in the community.

In this post, I’ll be summarising what’s actually been happening and my strong opinions on it and why it benefits absolutely no-one. You may love it, you may hate it, throw that out the window. These are the facts.

Earlier today, Disney filed a domain claim in an attempt to take the Rewritten to domain. It is important to note that this could be a fake Disney (people have impersonated them to perform such actions in the past) yet the vast majority of the community think it is likely real. For the purpose of this post, the assumption is that this was a real email from Disney themselves. 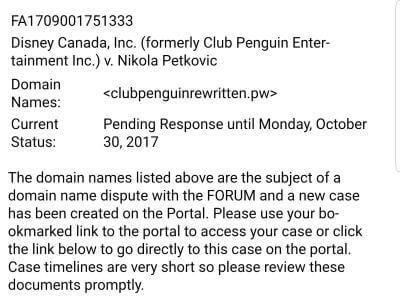 Theoretically, this means that the game itself is not being taken down, or so we can assume at the moment. However, Codey (one of the two administrators of the game) is not planning to make such changes. This is not the first time this has been said though and as we’ve seen before, things can sometimes work out.

However, every other staff member is willing to “put up a fight” (as said by stu) and it is almost certain that the team will do so to help, essentially, save and protect the huge community which has been built around this game. This is all the information we know so far, yet more will be revealed to us as time goes on. That concludes the information so far!

I struggle to support Club Penguin Island if they follow through with the takedown of Club Penguin Rewritten. It doesn’t surprise me that a big co-operation like Disney will quite literally use legal action on a group of teenagers and other young adults who at one point, were barely able to maintain the upkeep of such expensive servers.

Disney are trying to destroy a community to better themselves after they made a huge mistake. That’s the difficult reality which I struggle to understand with, yet it is true. Would this really happen had they have gone down the mobile-only/CPI route? Of course not.

Has it been? I hadn't heard. If Disney is trying that, I can't say I'm surprised, but they need to recognize the opportunity they missed.

Screenhog was the original artist for Club Penguin

Take a minute to look at all of the people so angry about the actions of Disney so far, myself and hundreds of others. Consider how Club Penguin Island has advertising varying from TV to billboards in New York. And yet they’re still insistent that Club Penguin Rewritten is a problem? Let’s just remind ourselves that Club Penguin Island is the one being included in a lawsuit, why don’t they focus on that?

This marks more than just a company who I am honestly on the verge of describing as “corrupt” trying to essentially bully a group of teenagers. It shows that they do not believe in the potential of their game to the point that rather than focusing on that, they have to spend time trying to destroy other websites which I refuse to even label as “competitors”. If they had something brilliant planned, it would not be necessary to do so. 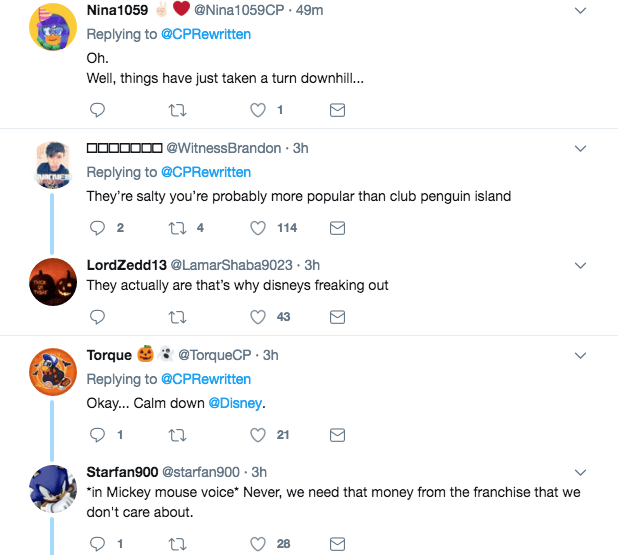 I love Club Penguin Island too – don’t get me wrong – but this completely changes everything. Look at the reactions, they made a rather unwise decision and from the vast majority of people, they seem to be paying the price. It benefits nobody to anger and destroy a community who will *not* in return turn to a game which took away what they enjoyed.

This decision disappoints and frustrates me. It benefits nobody and proves to people including myself that Club Penguin Island might not be what we hoped. I’m not happy with that whatsoever, which is why I’ve written this post.

I wish the best of luck to the Club Penguin Rewritten team and thank them for all they’re doing against Disney’s proposals. Thank you for reading.