Last night, Club Penguin Rewritten was initially planning to close, causing a huge amount of sadness and confusing throughout the community. The good news is that the game will no longer be closing, however I think it’s important to explain the events of which happened.

The main two things which are the most significant and important to understand are that:

This post is a combination of information released by the team through statements and social media, however this is the most recent statement regarding the issue, confirming that the game will not be closing. 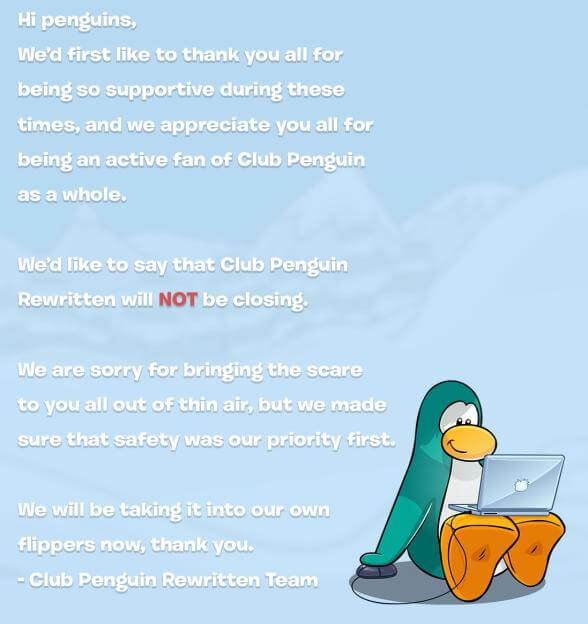 On February 8th 2018, the ex-administrator Codey was overthrown and removed of his position in the team. I reported on this in a bit more detail here, however I have not posted about the screenshots of horrific messages from Codey, varying from blackmail (which is illegal) to threats and rudeness.

Most of this was kept behind-the-scenes, however there was a clear escalation on February 15th when Codey cruelly leaked Auroris with intent of harming the game. This is a custom made source code which Hagrid, a current administrator, spent a lot of time working hard on. It was leaked after blackmail, however fortunately has now been removed.

Several more messages and screenshots are shared, however it would not be appropriate for me to publish them due to how awful they are. Codey has continued to harass the team, however a some hours ago, it escalated to an unbelievable amount, which is the main cause of this situation.

A detailed document revealing a staff member’s personal information was immorally, awfully and horrifically published online. I don’t want to discuss anymore of that than is necessary, however it was awful. Codey warned that if Club Penguin Rewritten was not shut down, police could be unfairly sent to that staff member’s house. Recently, there has been a case where someone suffered significantly from this, and this should happen to absolutely nobody. It is with this fear in mind, the team initially decided to close the game.

Now I’ve heard rumours that this was a “publicity stunt”, and I can absolutely assure you it is not. However, it is so important for me to stress that personal safety always takes priority, and with that in mind, the team initially intended to close the game. This is reasonable and fair, especially considering the huge scale of the situation.

However, the story ends on a positive note! Codey realised the horrors of his actions and as such, apologised and returned the Twitter, significantly minimising the threat. As a result, Club Penguin Rewritten will remain open for us to enjoy!

I hope that this cleared up some stuff, thanks for reading! Waddle on!