The Fair was due to release yesterday on Club Penguin Rewritten, but sadly it has been slightly delayed. The good news is it will release later today!

hagrid, an administrator, revealed this photo as a small sneak peek (though the full room was released in Devcast) and released this statement a few hours ago. 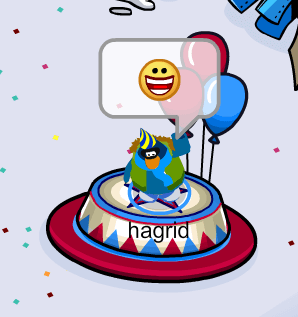 I’m sorry to say that the fair has been pushed until tomorrow. we’ve been pretty busy lately but we promise to deliver it [today now] as we will be dedicating the whole day to the development of the party. as the team has adjusted to a new schedule we should be seeing less and less delays until none very soon. once again, sorry and thank you for understanding. i’m sure you’ll enjoy the party.

Joee (another administrator) also revealed a few things about The Fair. Firstly, he released a sneak peek of what appears to be the prize booth.

It’s a bit hard to see what’s going on, but you might be able to make out some of what appears to be one of the prizes which will be available this year!

He also explained a bit on the delays:

Once it’s out [today now], you will understand why [it is delayed], but I can’t reveal anything now

This does sound really exciting, as perhaps a surprise is planned. We’ll just need to wait a bit for The Fair to release to find out what’s going to happen though! Thank you very much for reading, be sure to check back for more of the latest news and guides.