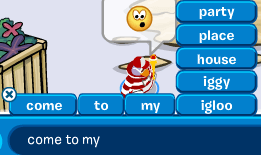 In case you aren’t aware, Club Penguin Rewritten has a filter to block inappropriate messages, however I know a lot of people will be slightly confused on why it seems like a lot of messages aren’t going through this filter right now.

Essentially, it’s because the team are working on improvements on a more harsh filter which is currently enabled for everyone. The full statement is below, but it’ll be eased for most people soon.

The filter is an improved version of the one that CPR has used over the years, and will not remove any day-to-day conversation words. It will, however, be more strict to avoid BAD words going through.

Please note that at the moment it is available for everyone on the island. During the Music Jam, it will be only given to a player if they are banned, or new members. It will be removed after a few days for both situations as stated previously.

The changes are part of an overhaul to the filter system on Club Penguin Rewritten. Eventually, it is expected that something like this will be added to the game, similar to the method employed on the classic version of the game.

On a little side note, the newspaper will be releasing later today with the Music Jam! Thank you very much for reading, waddle on!