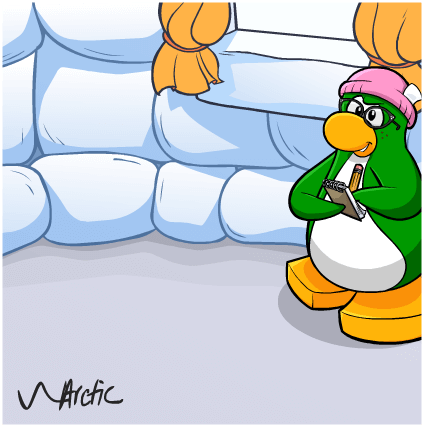 Aunt Arctic has made her first appearance at the 4th Anniversary Party as part of her four scheduled visits! You can find lots of information about this on the tracker, but I just wanted to share her new background, along with her playercard.

You might notice that her playercard allows you to access her igloo! It’s unclear if this will remain the case and if it was a bug, but this was indeed the case; the image on the right is actually Aunt Arctic’s igloo.

As for her background, it’s a custom one which has never been seen before, although it’s very simple! It’s titled “Aunt Arctic’s Happy Anniversary Giveaway”, and she’ll be offering this background throughout the party.

Just to remind you, even though Stamp Books haven’t been implemented yet, you’ll still automatically obtain her stamp if you’re in the same room as her!

If you haven’t met her yet – don’t worry! The tracker contains a bunch of information about her visits, so be sure to check that.