If you’ve been on Club Penguin recently, chances are that you’ve seen hundreds of bots and clones on our island. In this discussion, we’re going to investigate

how to create these bots and how Club Penguin can stop these bots. You’ve probably been told that you should just report them to the team, but with thousands of them, how can they get them all? I think it’s possible, but they need to do more than just listen to what the community says.

From Googling, looking at Club Penguin’s history, analysing the information and a whole lot more, it’s time to share my findings.

The first thing we must do to solve the problem is address the issue of bots. Recently, there have been thousands of bots gathering on popular and unpopular 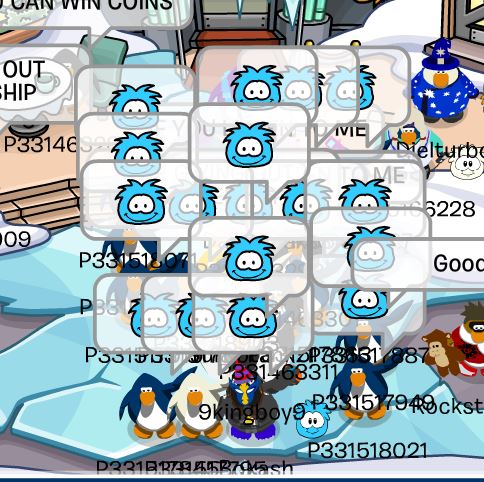 servers who are spamming the chat. Some are even managing to do things which you can’t type such as numbers and symbols. This is a key piece of information which we will use to get to the bottom of the issue in a minute.

Others are positioned perfectly to create the Swastika symbol, which definitely should not be happening on a kids virtual world. This is also very useful information. I’d like to give credit to Riyita who took the screenshot on the right.

What are Club Penguin doing at the moment? Megg has addressed the issue on the comments section of the What’s New Blog informing players that the team are working to solve the issue. In the meantime, us players need to report users and help play our role, but like I said, with so many bots, that comes challenging to do. Right now, I think Club Penguin needs to make an official post about these bots warning players not to go to any places which it advertises. Bots are strictly against Club Penguin rules. 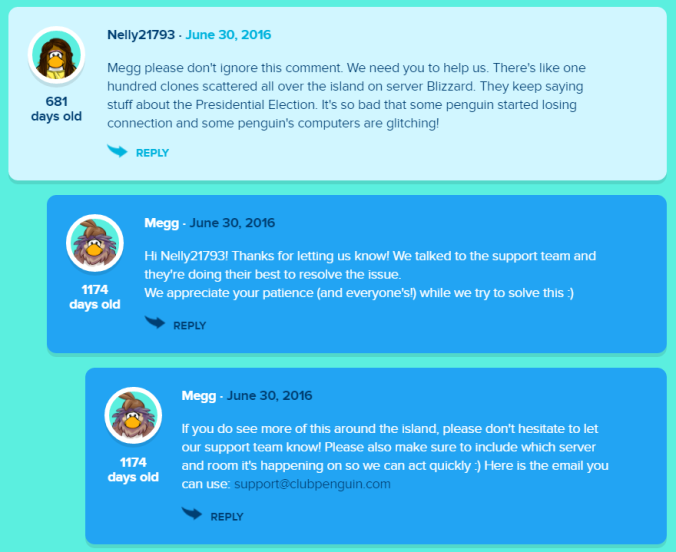 Whilst Club Penguin has been known for saying things which aren’t true, they are trying, even if it’s not the best they can do. There is no denial that there has 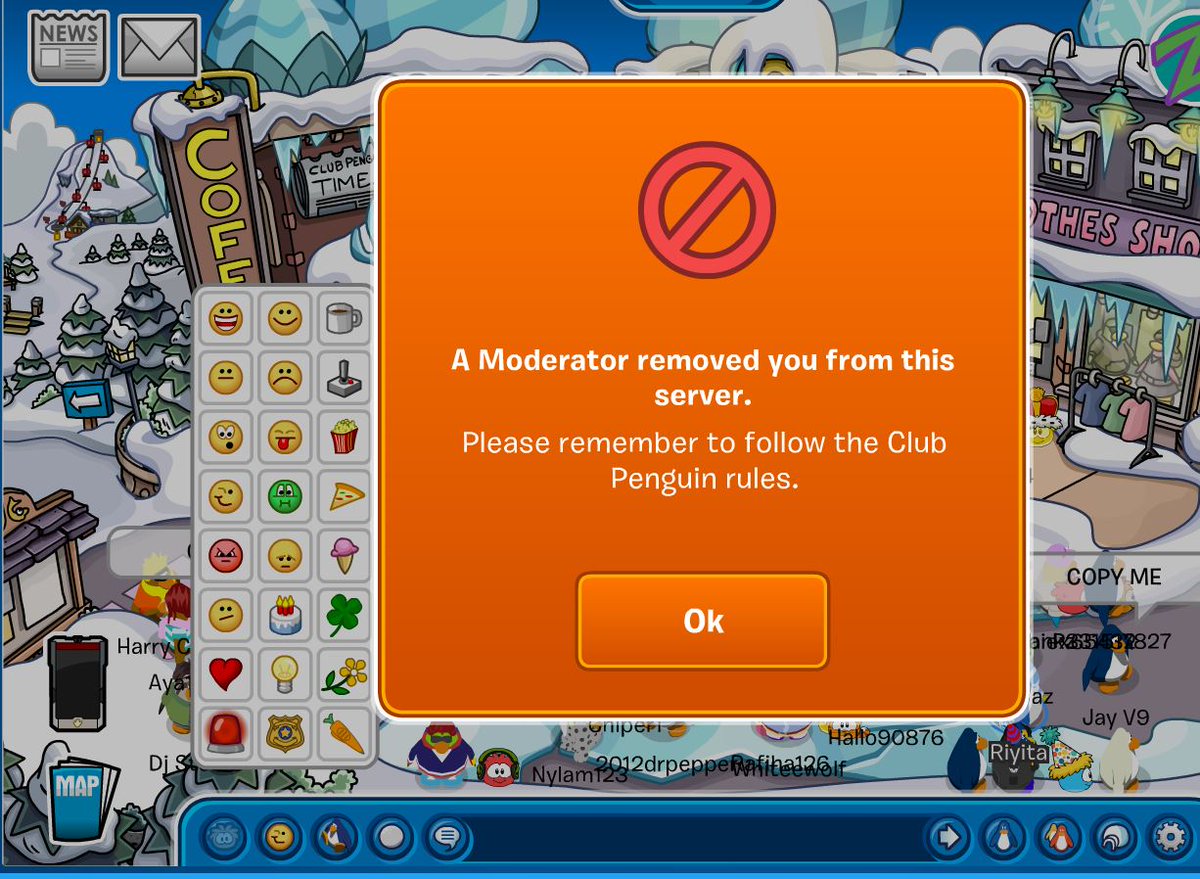 been an increase of moderators on popular servers. Here’s the problem. They don’t know who exactly is controlling the bots. The real controllers can make it seem like an innocent player is doing it, therefore risking that person getting kicked or banned.

A player called Riyita was kicked of the server as a bot controller made him control the bots. He was, indeed, innocent but got kicked off anyway. This just proves that moderating the server is not enough as all the bots would be gone if it was. So what can they do? Patch the program.

This might sound impossible, but I believe that it is. First, I need to tell you how to make the bots. Do not, under any circumstances, create bots as you have a high risk of getting permanently banned and it is a nuisance to others. The following is for informative purposes to help aid the discussion only.

Bots have always been an issue, but why has there suddenly been an increase of bots? Simple. There’s a new flaw that’s been discovered in Club Penguin’s

system. I have discovered two ways to create clones/bots. The more well-known one is Cloud Penguin, a trainer. On June 30th 2016, Penian4 made a post announcing a new program called “Multibot” which allows you to create clones.

This downloadable program has been used by many people and is the more popular method of creating bots. Around the same day, another script emerged for a program called Python which also lets you create bots. The code is 575 lines long, yet is not well-known by many. You can read the code by clicking here. The video which I am about to show you uses the same code written in that link and he shows proof that it works. It could be that both programs run on the same code though. The Python script has the option to create the Nazi symbol, which has been created as mentioned above, which is more proof that it’s real.
Update: Karth123, the owner of the Follow Bot script, says that it came out much earlier than Multibot.

So now that we know how bots are created, how should Club Penguin try to tackle them? We’ve already concluded that having moderators ban/kick bots isn’t working so the team needs to patch the program.  This seems impossible. Many players from the community think this too. I mean, if they could, they would, right?

I have reason to believe that it is possible, but what I don’t know is why Club Penguin haven’t executed my theory already. With this issue becoming so severe, I have no doubt that the team would’ve called a couple of meetings by now. See, the thing is, this isn’t the first time the island has been overrun by clones and bots.

can they not stop it now? Hold up, I know what you’re thinking. The Follow Bot now probably runs on a different piece of code, right? Let’s take a moment to remind ourselves of 2014. In 2014, there was a program which meant you can hack any item. This was because hackers found new pieces of code but it quickly got patched within a few days. Before then, you could only add certain items and they were not at all rare.

It’s been four days since this leak, so I think Club Penguin should know what they’re doing by now.

Like most of the community, I hope that this new program gets patched. Unlike most of this community, I believe this program can be patched for the reasons above. Since I am able to contact Penian4 easily (being a moderator on his chat helps) I did want to interview him, but I haven’t been able to catch him online.

What are your thoughts about this? Make sure you comment below, because I will be sending this post to the Club Penguin team.