Memberships on Club Penguin Island suck. There’s no other way of saying it and no matter how hard I try to resist “bashing” a game that is still in beta, I can’t help it. They’re expensive and not ideal. I’ve collected some opinions from the community, my own and even got the most surprising and confusing response from Support.

They cost $6.99 a month but for the purpose of this post, I’ll mostly be using British currency where memberships cost £6.49* a month. That’s already £1.50 more expensive than classic Club Penguin and it gets worse.

Update: Good news! There are talks going on about this. Read more here!

It does not matter where you live but your membership will always be more than the classic game, which is horrible, and that’s on desktop which many people claim they would be more likely to pay for. You may remember I said that players will constantly be comparing old to new and this is another mark for new.

Membership is £3.33 per month if you buy a six month membership. In total, making it £19.95. At £6.49 per a month, membership is £38.94 in the same period making it 1.95X more expensive than classic pricing. That’s almost double the price if you bought a CPI membership for six months compared to classic!

Your country might not be as badly affected, but it eventually will be more expensive than classic. This is because you can only buy one month membership deals instead of getting better value for a longer time period. That is something which needs to change in my opinion.

This is a controversial topic, but I would say yes, provided that they do not run on top of memberships but along memberships. That means a non-member could buy a Disney outfit for something like £1 and keep it forever.

I’ve actually written an entire article on this when we knew CP Island as Project Super Secret and I stick by it. Read it here!

It’s been scrapped, from what I can tell. That’s great, it’s not a baseline system, something the community was against! The downside is that the prices are way more expensive than the exchange rate will (hopefully) ever get.

But hey, if we spoke out against the baseline system maybe there is hope we can help encourage the team to solve this membership issue!

Is it attractive to buy a membership?

Absolutely, when you don’t consider the price. I cancelled after 2 months because of it. I really wanted to see the hard work the team put into the game and that’s not possible with a membership*. Unfortunately, I don’t think I can be a member 24/7 with this pricing and I plan to buy in April when there is a huge update, cancel, and buy again in the future.

*The solution to making membership more attractive is not to limit non-member features more. That won’t result in a higher sales increase, it’ll result in uninstalls as you will see later in this discussion.

But there is a free trial!

If you can persuade your parents to put in your credit card to get a 7 day free trial, there’s a high chance you’ve just got membership. Parents are unlikely to input their details for a trial and ultimately the team should not make them have to.

If they create another Disney account and another iTunes/Google Play account to abuse this, it makes no difference since they start from scratch anyway.

What about their advertising techniques?

They’re advertising tubing as an activity for members. Enough said. Check out this tweet from a really talented former Club Penguin artist and musician who also made some of the tracks on CP Island.

There's no good reason for it. I hope it doesn't remain in the full version. It doesn't even make financial sense

But…you’re not in the geo-beta. You can’t complain!

I think I speak for most of the community when I say that the state of memberships are ridiculous. I should not need to be part of three specific countries to give feedback on something that must change by worldwide release. I completely get nothing is finalised which is the reason I’m writing this post.

This is a discussion and I appreciate you may not agree with me. Instead, please leave a comment below to help expand this discussion so everyone can hear different thoughts!

Club Penguin Island has a rating of 2/5 on both stores and the reason for that is because of memberships! People aren’t happy with this! It’s resulting in low reviews and a low rating. To those saying it’s a geo-beta, well, tell the reviewers that!

However, I decided to host a poll for around 21 hours. I asked whether or not you thought that CP Island membership was fairly priced. Here are the results:

It would blow my mind if despite how many people are unhappy with the membership system, the team makes no adjustments. I would even go as far to say that this would doom Club Penguin Island, and that’s a bold thing to say for a game which has not even launched yet.

Android is £6.49, but some users on iOS are saying it’s £4.99, a much cheaper price but I still go back to my value issue! Dj Stores/Foodtrekker kindly gave me permission to use this image but he also said the following:

“It’s solely the listing for the current GB price band is not reflective of prices once the game is pushed into worldwide production though it’s likely based on trends so far.” 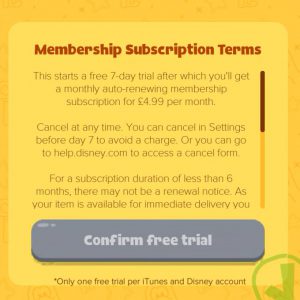 This confuses me, but it gives hope that prices could be reducing! Once again, I completely get that the £ is not a currency in the geo-beta but that should not prevent me from giving feedback.

What better way to solve your confusion than to contact Support about it? (Spoiler: it becomes way more confusing)

Firstly, I called Billing support  They told me that I couldn’t even give feedback about membership prices because I’m not in the geo-beta, yet alone inquire about why prices vary by operating system!

Okay, so now I called general Support. They told me to email, no big deal. I get a response back with them asking me to contact Google, which was an issue as I could not find their email.

This is part of my response to that email addressing memberships in general:

“…£4.99 is still quite expensive in the long run, but not too bad. £6.49 is ridiculously expensive. I really hope that the price changes because as a non-member there is nothing pulling me back to the game: daily challenges offer fifty coins but I can’t buy party supplies, I can’t fish, I can’t wear clothes or do activities. You’re advertising going down a waterside with a tube as a member only feature. I mean, where do I begin with this?
I so badly would like to be a member all the time but it’s looking like I’ll be buying in April when there’s an update, cancelling and buying whenever there’s a new update. I don’t get how prices can vary by device. I don’t get why the game has even gone down this membership route, yet alone charge unaffordable prices for it. I get the game is in beta (which is why I’m classing this as feedback) but, seriously? Please fix this by worldwide launch, it is essential.
You guys have put so much effort into this game which is why I bought a membership for two months! It’s amazing but you only get to experience a fraction of that awesomeness as a non-member, which is disappointing! …”
But none of the last 1300 words make any difference if the first sentence of this response holds true:
“We do not set our membership prices anymore”

Wait, I forgot, am I blogging about Club Penguin Island or Broken Telephone? Oh right…

This is now so confusing. Who does set prices? I wish we could get a simple answer but it seems as if Support isn’t even sure what to do saying they could not discuss this further until worldwide. I mean, fair enough, but this is very confusing!

The solution, in my opinion, is to start by either reducing membership prices or by adding better value deals where you can buy a longer membership for less money each month. It’s also important that non-members get way more to do.

As a non-member, other than interacting, I have no reason to log on each day other than to do the Daily Challenges to get coins, but I can’t buy party supplies or clothes so there is no point. For most users, that would mean an uninstall.

Further down the line, in app purchases should at least be considered. Going down the membership route is one very risky for mobile and I am concerned with this. Either way, reducing prices and adding more things to do for non-members is a great step in the right direction!

I rated Club Penguin Island a solid 8.5/10. With this membership issue I have decided to change my rating to…

Thank you very much for reading! If you do get the opportunity, I would highly suggest getting a CP Island membership, at least for a month. Leave your thoughts in the comment below and make sure to send feedback to the team. Together, as a community, we can make change!