Club Penguin Island has a rating of 2.4 due to unjustified and unreasonable hate by players who are not fans of Club Penguin. In this post, I am finally sharing my thoughts on this so-called criticism to our island. These opinions are “controversial” and if you disagree, I would encourage you to leave a comment or a tweet as it is a discussion.

Right. Where do we begin? Let’s start with this awful top comment from the Club Penguin Island Facebook page. 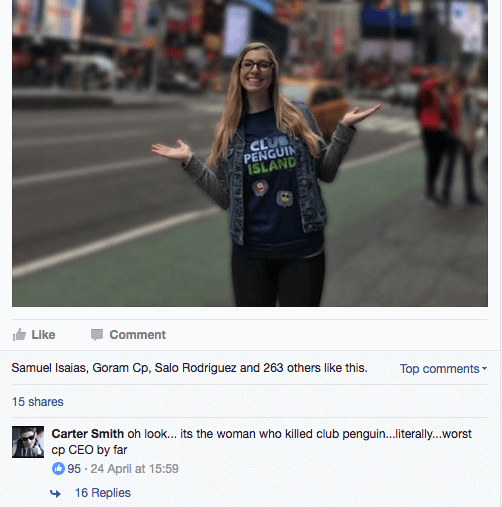 Where do I begin here? Firstly, if you knew anything about Club Penguin, the game does not have a CEO and the closest person to that role is Kyle Patrick Laughlin. Megg/Bobbi, who you referred to as “the woman who killed club penguin”, is the community manager and can’t simply do that.

95 people agreed with these but that brings me to my main point. A large chunk of the criticism is from people who left years ago and are now going “my childhood is ruined” yet they have no clue of recent years. If they did, I have a feeling they would appreciate the meggnificence of Megg a lot more.

It took me three clicks to find the first person saying this. Don’t leave for many years and come back now complaining that your childhood has been ruined when in reality you have no clue of what’s going on. 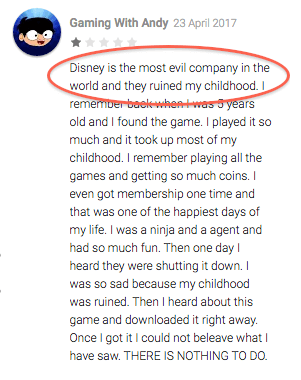 Most of this isn’t even criticism. Rsnail summed it up perfectly when saying this:

reviews are what people think of it. Each review should be taken seriously.

The thing is that old Club Penguin cannot be brought back, like some people demand. This was not a change inspired for money. The idea that the team don’t care about us is…crazy. The decision to go mobile only was not an easy one for the team, they have said that. They know that most people now, especially younger people, have mobile devices. They probably would have know that classic Club Penguin was reaching the end of its lifetime with servers being filled with bots and 2-month-long takeovers. They would not spend over 2 years of work to make a “quick buck” like some people claim unless they truly cared for the game and believe me, they do.

It’s very hard to be polite to people who exaggerate the faults of Club Penguin Island so greatly but I tried. Let’s just give some ideas for now.

What does need to happen:

It’s fair to say that whilst most of these reviews are highly exaggerated, the game isn’t perfect. There are three things though which I feel need to happen for Club Penguin Island to pick up to at least a 4 star rating:

I keep going back to the fact that players will constantly compare the classic version to the new version. Players are already doing that and non-members request at least to wear the pre-registration items. Personally, I think there was a reason why this never happened in the first place. Maybe the team could only program items to be member or non-member altogether but hopefully with such a vast amount of feedback, that will change.

And I do believe that will change. Let me explain. Originally during the geo-beta, the problem with Club Penguin Island membership was how expensive it was. Our feedback made it lower and I’m sure our feedback will have a similar effect on non-member features. We’ve already seen non-members slowly get more features like cannonballs and most recently the ziplines. Eventually I feel that will extend to clothing but it will take some time.

Some people aren’t even that fond of a membership system. It is certainly unique for mobile, but honestly, what’s the answer? Games like Clash Royale can do purely in-app purchases because they’re competitive e-sports, which Club Penguin Island isn’t. Until a solution is designed, membership isn’t too bad.

How to improve the non-member restriction problem 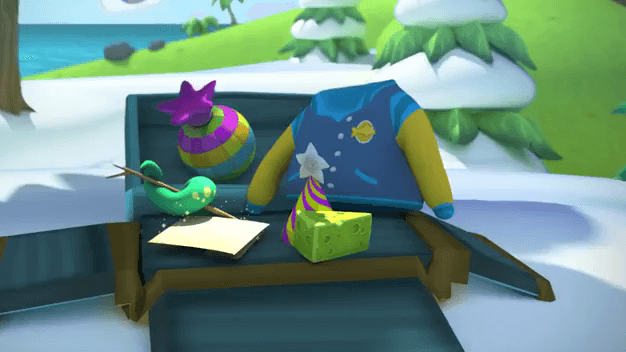 Pre-registration rewards (alumni jacket and beta hat) have got to be for non-members else there will always be so much negative criticism. This is a good start but when igloos come out, I would try and focus on making igloos more for members yet clothing more for everyone. Eventually I’d like to see the first one or two packs available for non-members to wear as well.

Members should, in my opinion, have the ability to get some really awesome looking tubes! But non-members should at least get the tube. The main two reasons for this are that it’s annoying to have so many locked things on your interface.

The second is that it’s a tube! All it let you does is float on water, go down waterslides and from later this month, go Sled Racing. It’s not much and making mini-games a member only experience will not at all be a good idea. But I don’t think it’s unfair to give non-member the basic tube if members are able to get some really awesome ones.

Currently there’s three chapters of adventures and I’ll explain a bit later on how I’d like this number to increase. When there’s some more chapters for members to complete, it really would not hurt to make the basic ones non-member only. When a bug meant non-members could do some mascot adventures, people weren’t surprised because it isn’t too unreasonable.

My suggestion would be to let people play either chapter one of Rockhopper’s Adventures or Aunt Arctic’s Adventures. It might be logical to go with AA’s Adventures because that’s what you get introduced to at the beginning, non-member or member. Eventually, why not both? But adventures should be something that will slowly unlock for non-members as time goes by. It may take a year, maybe more, but something that should happen.

Overdoing member features in the future:

Things like puffles should be able to have some colours adopted by non-members. I know that’s many months down the line but do have a double think about what non-members get each update too. Of course, members must also get a lot, but still ensure that non-members are also excited for updates!

These are four things and I think they can make a MAJOR difference to the point I’m surprised no changes have been made already. Hopefully they work on something soon.

This is probably the most controversial part of this post. I appreciate that some people are trying to keep the classic version alive. It’s hard to distinguish these people from those who are profiting of the closure of the classic game claiming it’s for “educational purposes” when receiving donations when the game is offline.

I won’t go into names or details but I think most people know what I’m talking about. Receiving over 100K viewers in a matter of days is very impressive but it is also a threat to Club Penguin Island. I doubt there’s ever been a time in CP history where a non-official game is literally competing with an official one that has the power to end the contest.

If you search “Club Penguin”, “island” is first but the name of the CPPS is second. The Club Penguin franchise is continuing and I don’t feel like this private server will help it to continue to its full potential. Anyway, some brief points and not necessarily something that needs to happen but something that would help a lot.

The team can help with this, mainly by listening to our feedback. But this is about the players! it is awesome that we’re seeing new social media accounts, new blogs, new readers of blogs, new chat servers and things like that. It’s really bringing back that old Club Penguin feel which was mainly because of the community. Once everyone begins to like Club Penguin Island and we get that “old CP feel”, I think we’ll be a lot better off.

It is indeed true that the classic version had more places to explore and you could argue more things to do. But this was classic Club Penguin after the same amount of time CP Island has been out. 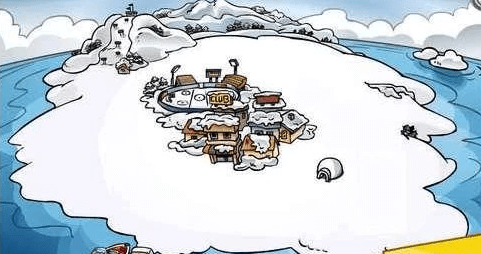 More stuff will come in updates. So much amazing stuff is coming, a lot that will be new and a lot that will be familiar. Here’s proof. Above was the map in 2005. Below is the map from classic Club Penguin before it ended after a difference of over eleven years. The point is, the island needs time to develop so give it that! The game is new yet they’ve already done so much and it’s important to realise that, especially before leaving a negative review! 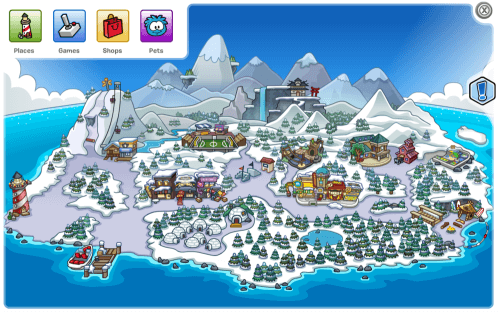 On the topic of more things coming, let’s talk about the monthly update system. It isn’t quite the weekly update system but I think provided there’s events and free items in-between updates, it’ll be fine!

Each update will be big but I do have an ambition for each update. I have no clue how realistic this is but I would like new adventures and new levels with new rewards each update. The adventures might not be possible, but at the start of the update, there should be no player at max. It makes it more boring for that player.

Rewards don’t need to be anything big but then again, I have no clue how realistic this is. Clothing can literally be copied from classic Club Penguin, we would love that to happen! Here’s an idea I had for a random pack…the Sky Adventure Pack.

It would contain the propeller cap, space suit, helmets etc. from classic Club Penguin, a tube that’s like a rover and maybe some emojis. That could be a pack and I would love that because it increases the max level, something which I would love to happen with each update.

Anyone who fails to support it isn’t a Club Penguin fan if they want the official franchise to end but I mean, how could you dislike it other than for the restriction of non-members? The filter is better, the gameplay is better, I’ve never actually been hyped for a new update for over a year now. Club Penguin Island is amazing, my only concern is that not enough membership sales will take place to keep the HQ running but it’s something I really hope will change as it really deserves too.

Okay…so. Thank you very much for reading and uh- have a great day!