Blogging since 2013 has been a fun journey, with recently me focusing on Club Penguin Rewritten which has proved extremely enjoyable and beneficial for the growth of this blog.

In fact, today this blog hit 250 thousand views which is an extraordinarily large number! I’m very thankful to all of those who continue to support and read this blog on a consistent basis and I would like to thank everyone reading for helping me to achieve this incredible milestone! I do appreciate that a lot! However, I also need your help!

It’s been a month and a half since I’ve started posting about Club Penguin Rewritten and I’ve really been enjoying it! Recently I’ve been working on some new pages and other little neat visual designs which you will hopefully see in a few weeks, but I think I’m going to spend this post explaining the future of this blog.

So, Club Penguin Rewritten content is going nowhere. This is currently the new header, however I might decide to make some changes to it soon.

So Club Penguin Rewritten is going nowhere and this blog will be focused on the game for many months to come! The rest of the year is lined up with great parties and that can only mean *hopefully* great content!

Pengur is another CPPS that is partnered with CP Rewritten and will be releasing very soon. The unique thing about this private server is that a lot of it is made up of custom content and is set in the “new” era. For example, here’s a picture of the map of the island. 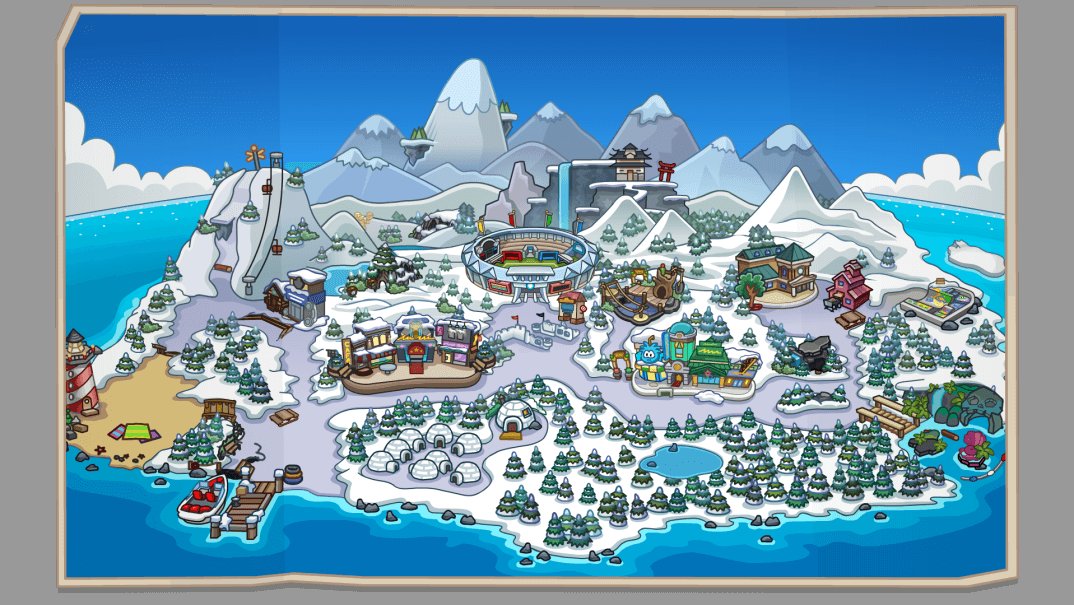 Whilst I won’t be blogging about Pengur until it releases, I have confidence that the game will be extremely fun and cool, so it’s a likely possibility that I will be blogging about it in the future! Alright, I guess I’ve put this off for too long.

There are some serious flaws with Club Penguin Island and I plead for the team to start listening, at least responding and hopefully implementing changes. However, it is the official franchise, and some very exciting things are coming which I would quite like to be a part of and report on.

I don’t regret the break I’ve taken recently, I’ve enjoyed the ability to just play. Recently, I’ve played the game a little bit and it is enjoyable for casual play, but not really enough to dedicate such a significant time blogging about. There is a reason why there are so few Club Penguin Island bloggers left. However…

When I started blogging about Club Penguin Rewritten, I said there would be a line. At the point when CP Rewritten blogging just began, this blog was mainly CPI dominated (and still is, until I upload the changes) with all the pages being CPI-themed. Then I completely cut CPI off the line..

This is an idea I have been considering for the new line. Also by the way, this line thing is completely hypothetical.

Essentially, I can imagine me blogging about Club Penguin Island update news and other major news, but guides would be lacking. It would also probably not be as visible but, this is only a possibility if the promise of amazing things coming soon is true, and from the sneak peek shared recently, I suspect it is.

Yes, this is my blog, but I would really like to hear from my audience on this.

So here’s what I’d like to do, I’d like to hear from you! I’ve set up a page on a site which I’ve seen many community members use lately, Saraha. The idea is that you can simply send in a message, big or small, with as much details as you like, anonymously without having to create an account or sign in.

I’m interested to know, what are your thoughts on my ideas and how Club Penguin Mountains is going now. Do you want to see the return of some Club Penguin Island content, or would you rather just me stick with Club Penguin Rewritten. Please click here to send in feedback, it would be much appreciated.

So that is the future of Club Penguin Mountains, but for now, let’s focus on the present. Thank you very much for 250 thousand views, it means a lot to me, and I hope that number will increase as time goes by!