UPDATE: This exciting news was not related to Pengur, but it actually was the return of Club Penguin Rewritten!

Hagrid, the owner of Club Penguin Rewritten and an administrator of Pengur, has confirmed that there is “news” to be revealed in the next few days.

He also confirmed that this news was related to Club Penguin. 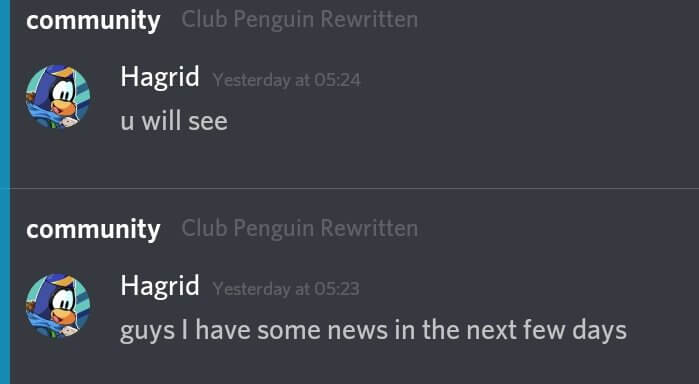 Yesterday, he also revealed that “two big things” are “in the works”, and only one of that includes Pengur’s Project Coral with it being unknown what the other thing is.

It is very likely that this could be related to Pengur, but it could be something else too, especially since it’s something other than Project Coral!

I’m honestly incredibly excited to find out what’s being planned, and I will be sure to keep you updated. For now, I don’t really have any guesses whatsoever, so I’m really curious to find what’s planned, especially since Hagrid is very talented and that its Club Penguin related.