During the Waddle on Party, mascots frequently logged on, allowing many people to obtain all the stamps for meeting mascots and as such, making them less rare.

Along with plans to make mascot meet-ups “more fun”, Rainbert (an artist for Club Penguin Rewritten) revealed that the team is “taking a big focus” on creating custom backgrounds for mascots, meaning they will be exclusive to the game and never before seen. 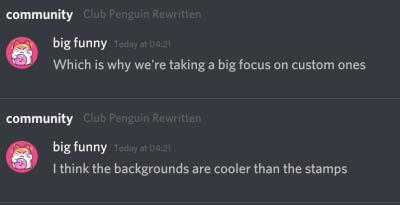 Rainbert also created Rory’s amazing “Thank you” background and at the beginning of this month, he “confirmed” that Rory would have a new background when he next visits the island!

For absolute transparency, I do want to add that an administrator later described this news as “undecided”, however it does seem very likely, especially considering the circumstances and a staff member somewhat confirming it.

I also really hope that whenever a mascot next visits, they have a new background since many players have the current backgrounds as a result of the Waddle on Party. Overall though, this is very exciting news! You can view mascot trackers here.