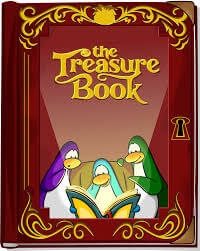 The Treasure Book may be coming “soon” to Club Penguin Rewritten, which was a book that allowed you to unlock a variety of exclusive items, or use a code for coins!

This hasn’t been directly confirmed, but Joee posted the following sneak peek. It’s unlikely to be a one-time code sneak peek as those rarely feature a foot item, but it has a very similar feel to the Treasure Book.

In fact, Joee said earlier this month that he had planned ways to bring back rarer items (such as the Blue Sneakers, which seems to be featured in the above image) and that could just be through the Treasure Book!

I have plans for certain rare items

It’s not known for certain if this is a Treasure Book sneak peek, but the team said they were looking into adding it during the first Devcast, and it looks very much like one, which is really exciting!