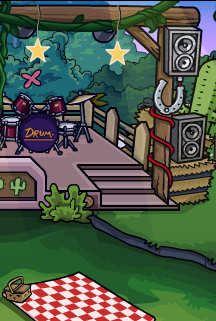 The Club Penguin Rewritten team have been releasing a lot of sneak peeks regarding the Music Jam lately, and a new one has now been shared! It shows part of a stage, along with some picnic seating.

In the past, this “Talent Show” stage has been located at the Forest, so although the team didn’t explicitly confirm that this was the location where this sneak peek was taken, it’s probably a good guess to assume it’s actually the Forest. I should also note that “Talent Show” is just the wording on the sign which usually appears next to this stage for decorative purposes; there isn’t usually any sort of event here.

Unlike the “Talent Show” at previous Music Jam events though, the snow in this image has been replaced with grass, indicating that this year’s event will definitely have a summer-feel! In regards to the common question as to why so many of these Music Jam sneak peeks have been released when the Prehistoric Party hasn’t even begun yet, the room development for that party has concluded, but the team are just working on dinosaur transformations.