A few weeks ago, I shared a Club Penguin Island glitch that showed you how to view the Sea Caves at some really cool angles, but I was unable to show you a tutorial on how to get there.

Recently I’ve been showing some people on the island how to do this glitch, but as a new method was discovered, I am no longer sworn to secrecy and I can give you step-by-step guides and a video on how you can make this happen to your penguin!

I would like to thank Foodtrekker for being the one to originally show me the first version of this glitch, which no longer works for some reason.

You will need a friend to join you in the Sea Caves. Ask your friend to stay on the second or third step on the steps on the right.

Then you need to head into the water without diving in. Stay at the top and friend jump to your friend on the step. This should happen!

You will be stuck and it’s now you need to decide what the outcome is you want from your glitch. If you want to fall out the map, don’t move, but repeatedly tap your tube so that you fall out.

Non-members cannot do this version, but it’s definitely the coolest in my opinion.

You can also do this in the Throne Room. When you first go in the room, head straight to the Throne Room’s chair. Then swim back to the top and repeat the steps given. I don’t know how this works but it does!

This isn’t as cool, though it’s still cool! Use your tube to fall but quickly take it off. From here you can just explore. You can see the rooms underwater from outside of them, which is epic! I mean, you can go deeper than the Glow Grotto!

Definitely a great time to use this glitch is when playing Hide and Seek!

Also, if you go to the far right, you get this really weird Finding Dory place that is hard to explain, but I showed you in the fifth screenshot.

When you run out of air or choose to leave, you’ll see that you’ll return to the room which you were previously in at a weird angle. This looks really cool, so take a photo! 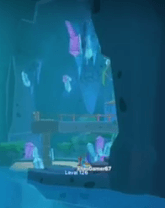 If the tutorial was a bit confusing, hopefully this video of the glitch in action will help!

I hope you found this helpful and I’ve been dying to share it with you! I would say, just explore. Be sure to check out some of our other glitch tutorials which we’ve posted.