MAJOR UPDATE: I say with no joy in my heart that this post is correct. Club Penguin will be closing down on March 29th 2017 and my prediction from over half a year ago remains strong. If you want to know why this is happening, read the third article of this post.

Rumours have been circulating for many years about Club Penguin closing down. For a long time, there’s been no credible proof of them being true, until now. Today, Club Penguin Mountains is going to analyse the facts and the rumours to present the sad proof that Club Penguin is shutting down.

To start this investigation, I want to take you back to December 20th 2014. On this day, I made a post about an article written by CNN given to me on the closure of Club Penguin. This is the article which has been eradicated from the archives of our island.

In Spanish, the article above translates to the closure of Club Penguin at the end of 2015. Rightfully so, the article was rejected by the majority of the community at the time who refused to believe it. I was one of these people. You may be thinking that we were all right, but here’s where things get interesting.

The reason mentioned for the closure of our game in the article was surrounding finance, which I find very interesting as I have a different theory. What if it was because of Project Super Secret? Yes, the update that was meant to save our game, destroying it.

I imagine that you are now thinking that 2015 has passed, so why am I bringing up this article? You may remember that I had the opportunity to ask Craig Voight, a designer of Club Penguin, multiple questions regarding Project Super Secret. He informed me that Project Super Secret had been delayed and many believe that it had been delayed from the end of 2015 to (confirmed) the start of 2017. The end of 2015? That’s the same time that the article mentions. That could be a pure coincidence, but let me explain why I think the reason for the closure is Project Super Secret. Spike Hike has said that they are, and I quote, “working on a name” which clearly indicates that it will no longer be called “Club Penguin”. You may be thinking, hey, Club Penguin might just be the name for the desktop version. The desktop version isn’t there. I’ve added evidence to the rumours a few months ago, but recently, Tech70 got official word from Spike Hike confirming our worst nightmares. 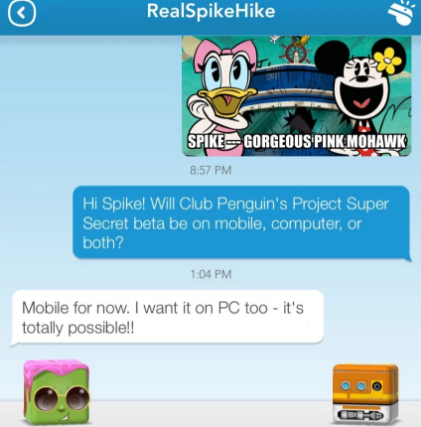 Ridiculous. But there’ll be a whole rant on Project Super Secret in a few weeks. This post was designed to confirm the rumours that Club Penguin is closing down. I know that the two screenshots above are solid proof anyway, but on Club Penguin Mountains, I like to look at the rumours and analyse those too.

UPDATE: Flash has further announced that they will be closing and Megg has admitted that it is dying. Since current Club Penguin is built on Flash, the game will close.

An update is meant to add things to our island, not remove things. Thank you for reading.