It’s rare for me to make posts on bugs regarding Club Penguin Rewritten, but I don’t think there has ever been a bug as frustrating and annoying as this!

When you log onto Club Penguin Rewritten, you might notice that the island is really popular and that a server is full (specifically Sleet at this moment). Eventually, you might log on, but if you head to any popular room, you’ll notice that there’s a bunch of penguins just standing there. 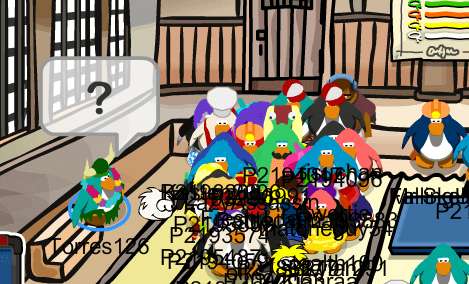 These penguins aren’t doing anything, it’s as if they’ve been away from their keyboard, yet they haven’t auto-disconnected. Some have been there for hours! It’s also filling up server space. This is because of a pesky bug. Here’s the best explanation I’ve found:

Basically penguins that disconnect/log off or whatever stay frozen in that room while they are offline and it fills up the server when they aren’t even on.

–Yoseftzvi, a player who reported this bug to staff

That’s probably the best description of this bug so far, and I wanted to share it in case you’re confused by the large number of penguins doing nothing online, and why all the servers are full!

Staff have revealed that they’re “looking into” the bug, but sadly not much more has been revealed, and this bug definitely is very annoying. Thank you very much for reading, be sure to check back for more of the latest news and guides!